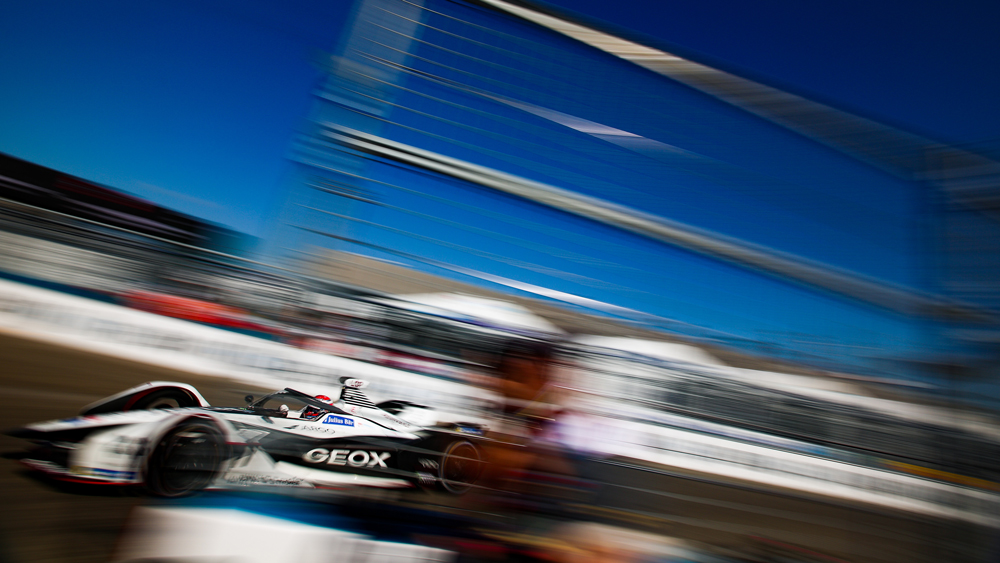 Over the weekend, hundreds of spectators poured into in Red Hook, Brooklyn, and witnessed smooth turning, electrifying divots and breathtaking designs, all while watching the latest FIA Formula E-Prix race and the seamless teamwork involved. One such partnership on display was between Dragon Racing and Italian brand Geox—and we were invited to see the collaboration in action from pit row.

Geox, widely known for luxury footwear and outerwear—specializing in patented leather, rubber and fabric materials—boasts breathable and sustainable products. Its focus on sustainability goes hand-in-hand with not only the FIA Formula E racing sanction but Dragon’s own ethos. The team, owned by Penske Autosport, has made advancements in its technology with the Penske EV-3 electric power train. This system includes four main parts—the inverter, motor, transmission and gear box.

The propulsion system used also aims for maximum power output by using a battery made by McLaren Advanced Technology, which produces 250 kW of power (equating to 335 hp). Though extremely powerful, the vehicle remains eco-friendly by keeping the emissions at a zero percentage.

The approximately 2,000-pound chassis for the Geox Dragon race cars is a mix of carbon fiber and aluminum. Piloting the entries are seasoned riders Maximilian Günther and José María López who campaign the No. 6 and No. 7 cars, respectively.

López brings experience to the team as a three-time World Touring Car Driver’s Champion, while Günther has previously raced in the Formula 2 sanction.

At this weekend’s double-header, López finished 12th on Saturday with a best lap time of 1:12.135 mins. He fell short during Sunday’s race, as he received a DNF mark signaling that he did not finish the race.

Günther, did not do as well on Saturday as he had hoped for his debut race in New York. He was not able to finish the race due to a depleted battery and received a DNF under his score. He turned it slightly around on Sunday as he finished 19th with a best lap time of 1:12.277 mins.

Though the Geox Dragon Racing team did not take home the trophy this year in New York City, its history in the sport remains strong as being one of the three founding teams of the FIA Formula E circuit. Since the inception of the sport in 2014, Geox Dragon Racing has secured two international wins in Germany and Mexico, and a runner-up mark at the 2015 Championship over the past five years, keeping it as a viable contender in the races to come.