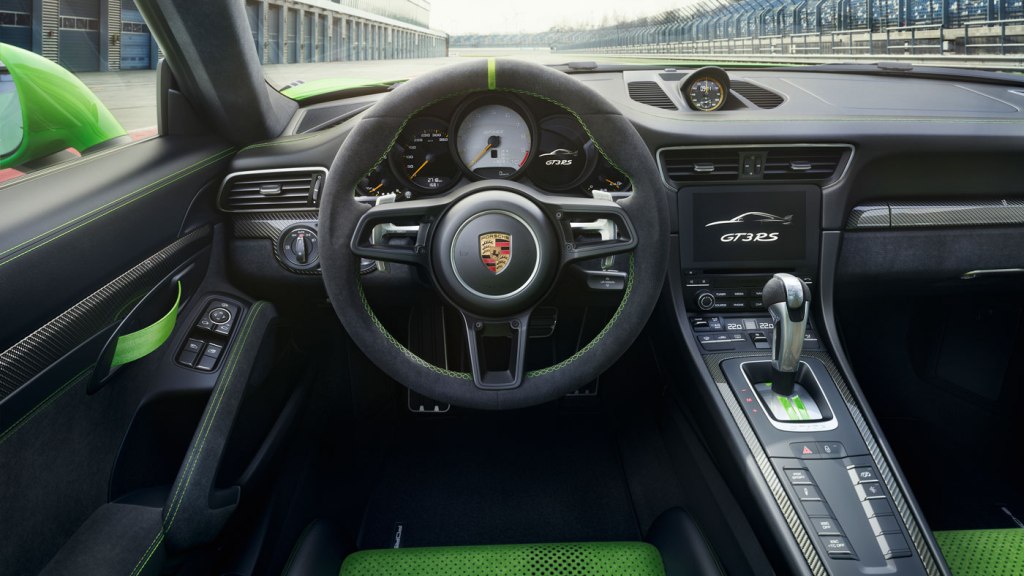 No other Porsche 911 is as special or as focused as the GT3 RS. Aficionados speak of it with lust, and prices of older generation models can approach a half million dollars. It is the track athlete of the entire line and, quite simply, the distillation of fast.

And so goes the brand new model, the 2019 911 GT3 RS, with a starting price of $187,000. Just like the original from 2004 that appeared in Europe (but not the States), the new model sprouts a carbon-fiber rear. The nose is more aggressive, styled for the wind and downforce. And in this era of turbo-charged 911s, its four-liter flat-six engine still breathes naturally.

Little wonder that demand is great for these new cars, and production is low. To even get a chance to drive one is a wonderful thing. And so we found ourselves at Germany’s infamous Nürburgring and its 3.1-mile Grand Prix circuit, ready to step into a wicked-looking example with glowing yellow paint and a naked carbon-fiber hood.

Except for that very first 2004 model, I’d driven every generation of the car at one point or another. Each has left me with an indelible memory—an imprint of nimbleness and speed. My very favorite was the 997-based GT3 RS 4.0 that arrived in the U.S. in 2012. It had a six-speed manual transmission and the same basic four-liter engine from the 911 racecar. To me, it provided the best synergy of driver participation and sporting purity.

The GT3 RS stays on point despite a moment with only two wheels in contact with the track.  Photo: Courtesy Porsche AG.

This new car, just like its immediate predecessor, does not come with a manual gearbox. Porsche engineers decided that a manual was simply too slow to operate efficiently on a racetrack. Instead it gets a seven-speed PDK automatic. The good news is that it is one of the best transmissions in the business.

The interior is all business, foregoing luxury for lightness. The doors have fabric pulls rather than traditional door handles and there are no rear seats. Still, the steering wheel is available with a coating of Alcantara and the ergonomics are excellent. It is a temple of focus.

Its light weight, super grippy Michelin Cup 2 tires, and 520 hp are important pieces to the sporting puzzle. But it’s the keen attention to details of the racing-derived suspension and telepathic steering that sets it apart from even the previous car. It recently set a new record at the Nürburgring for naturally aspirated cars, navigating the perilous track in under seven minutes.

The Porsche engineers who work on this car are part of the specialized GT division based in Weissach, Germany, and they are zealous. They will only release a model which is truly exceptional.

And so, with a light rain pattering the asphalt of this notorious F1 racetrack, and big gray clouds boiling overhead, I set out on the circuit. The sound of the rear-mounted motor will be music to any 911 lover who misses the naturally aspirated soundtrack of a flat six.  This glorious mechanism revs all the way to 9,000 rpm, and the speed truly comes on when you’re past 3,000 rpm, winding it up toward the redline.

The slick performance tires warm up in the cool air and I pick up speed through the curves. The steering wheel is a lesson in precision: Point your eyes exactly where you want to place an outside wheel and the snout of the car follows. The traction and bite of the front end is especially good, a failing in many older 911s since the majority of the weight is in the rear.

There’s a very high curb on one downhill sweeper that I’m anxious to stay away from; hitting it would bounce the 911 off its line and perhaps damage the car. But by the fourth lap I’m comfortable getting within inches of it. That’s the kind of quick confidence that the car lends.

I’m following a pro driver in another very special model, the new GT2 RS. The GT2 costs $293,000 and has a twin-turbo engine with 700 hp. In a direct line it is certainly faster, pulling away from me on the straights. Some owners will prefer that explosive, “wham-o!” blast of power. But it also has a measure of turbo lag when you first step on the accelerator. If the GT2 RS is a bull, the GT3 is a stallion. I love the linear nature of an unassisted engine, the ability to control power in micro-doses. The choice between the engine types and the models is a matter of taste.

Lap after lap, the 911 shows just how good it is, and just how fast you can push around a twisting course like this, trusting in the grip of the wheels, the downforce from that carbon-fiber wing, and the brilliance of the suspension.

When the day is done, I spy an original 2004 model — the one we didn’t get — parked in the pits. It is a simpler and smaller machine, with a pared-down interior that lacks a single digital screen or airbag. I’m told I can take a lap if I keep my speeds down. After all, it belongs to the Porsche Museum and the tires are old and brittle.

And so, in speeds that are faster than a parade lap, but slow enough to keep out of trouble in the rain, I experience that first, great 911 GT3 RS. The steering is totally mechanical, the brakes a bit grabby, and the tail definitely has a tendency to want to come out on you.

Yet there’s a clear connection from that model and the new one. It is a matter of focus. And, yes, they are both incredibly special.