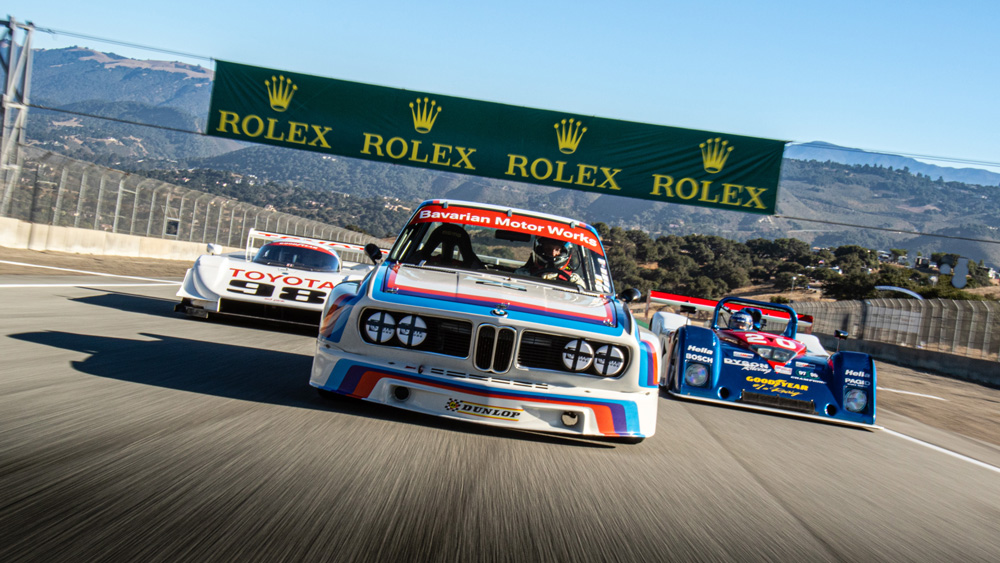 “Sounds like he lost a cylinder,” noted the tall gentlemen next to me. The vehicle in question was a 1970s-era Formula One race car entering the challenging Corkscrew section at WeatherTech Raceway Laguna Seca in Salinas, Calif. We were standing in a small, elevated lookout less than 20 feet above the track and about the same distance away. “The engine seems fluffy,” he further noted. I nodded in agreement, pretending my ears detected something more than the roaring refrain.

Watching cars that could have been piloted by the likes of Jackie Stewart, Emerson Fittipaldi or Niki Lauda fly by is already a bit surreal, but what makes this particular moment seem unreal is that the man making the observations is none other than Mark Webber, nine-time Formula One Grand Prix winner and the 2015 FIA World Endurance Champion. But that’s just how the Rolex Monterey Motorsports Reunion rolls.

Formula One cars from 1966 through 1985 return to the track.  Photo: Courtesy of Rolex.

The annual contest between historic four-wheelers began in 1974 but has had Rolex as a title sponsor since 2001. And Webber, attending as a Rolex Testimonee, further strengthens the already ironclad connection between the iconic Swiss watchmaker and the world of racing.

The 2019 edition—held August 15 through 18—comprised roughly 550 cars separated into 14 different groups, from Pre-1940 sports cars to grand tourers from the 1950s and ‘60s to endurance racers as current as 2016. And while the field varied greatly as far as form and performance, each found common ground in competing on the 62-year-old track.

“Laguna Seca is absolutely famous because of the elevation change and the Corkscrew,” says Webber, who raced here once in 1998 and came in second place. “Yes, it’s an intimate track, a little bit of an amphitheater—especially down near the bottom section—but because of the steep nature of the climb and the blind corners, that brings a tremendous amount of character to the track and it makes it more challenging and technical for the drivers. That’s why it’s loved and revered around the world for cars and bikes, because you’ve gotta have your stuff together here.”

With all races limited to 20 minutes, the format for the four days had Thursday and Friday as practice and qualifying sessions for the weekend. This year’s event paid tribute to the 50th anniversary of the International Motor Sports Association (IMSA) and its memorable cars—some on display and others given track time in the IMSA Prototypes division.

But IMSA is a baby compared to Bentley. The British marque commemorated its centennial with a parade of current and classic models, including one raced at Le Mans by Sir Henry Birkin, one of the renown Bentley Boys from early last century. McLaren also took celebratory laps with its back-to-back Formula One Champion Mika Häkkinen (who won the Driver’s Championship in 1998 and 1999) behind the wheel of the 1970 McLaren M8D/3.

More of racing’s monarchy were on hand for hot laps, most notably nine-time Le Mans–winner Tom Kristensen, who was presenting the new Audi R8 LMS GT2, and Scott Pruett—the winningest driver in IMSA history, including five-time champion at the Rolex 24 at Daytona.

Once I was helmeted and buckled in the backseat of his Lexus GS F, Pruett—another ambassador for Rolex—gave me two bucket-list laps around Laguna Seca’s serpentine in what seemed the time it took to take that many breaths. Pruett’s ferocity in competition, while tempered by passengers, was still apparent at every turn—as intrinsic as his enthusiastic demeanor and grin.

When asked about a favorite aspect of the Reunion, Pruett’s response was two-fold: “When you compete head-to-head with each other, you’re tenacious, it’s not like you’re making friends,” explained the Hall of Fame racer. “Because I’ve done it for 50 years, I’ve had the opportunity to race against so many incredible drivers. Now that multiple generations of us are retired, when we come back together it’s as friends catching up on old times. Secondly, it’s about seeing great cars. Especially since this was IMSA’s celebration of 50 years, getting reconnected with some of my championship cars was very special for me.”

Pit lane served as time machine, transitioning from one period of automobile to the next. Walking through it with Webber was like having Moses for a tour guide, the sea of attendees parting around us with every step. Yet he happily agreed to every photo request and graciously engaged with everyone who approached—a champion in not just racing it seems, but life.

Crews observing from the paddock.  Photo: Courtesy of Rolex.

Removing all doubt that this was rarified company, a voice from above (no, not the heavens, but the VIP viewing area above the pits) called out to Webber who looked up to see Dr. Wolfgang Porsche and companions waving to him. Their smiles, no doubt, were ones of appreciation for his success piloting the Porsche 919 Hybrid. A few minutes later, Indianapolis 500–winner Danny Sullivan greeted him and was soon joined by Kristensen. The impromptu meeting was at once a casual conversation among colleagues and the very raison dêtre of the Reunion itself—to be a venue where the sport’s greatest—man, woman and machine—convene, compete and keep company.

“It is an honor to witness these incredible motor racing cars compete as they were built to; they truly tell the story of the heritage and evolution in our sport,” mentioned Webber in an official statement. “The highest standards of precision and engineering on show link Rolex and the Reunion, while underlining Rolex’s commitment to motorsport globally.”

Personally, what has become equally clear is my commitment to come back next year. The 2020 Rolex Monterey Motorsport Reunion will take place August 13 through 16.