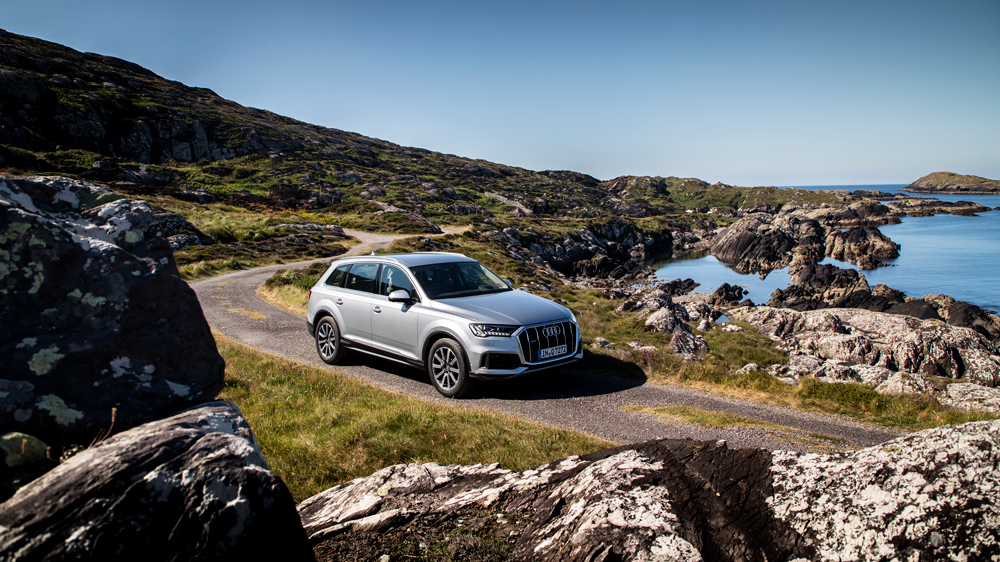 For 2020, the three-row Audi Q7 gets a significant mid-cycle refresh. To highlight these upgrades, the automaker sent us to the Ring to check out the crossover’s new turbo V6 engine and suspension technologies. Okay, not the Nürburgring but the Ring of Kerry in southwest Ireland—a 111-mile loop of twisting, undulating blacktop offering postcard vistas at every turn, and if you’re so inclined, a perfectly poured Guinness at the end of the day. While the notorious Nürburgring circuit in Germany is known as the Green Hell, the Ring of Kerry could very well be dubbed the Green Paradise.

Still, it’s a challenging road (especially when driving on the left side in a left-hand-drive plus-size SUV), and Audi evidently picked this locale to show off the 2020 Q7’s new dance moves.

While the new base Q7 carries forward with its 248 hp and 273 ft lbs of torque from its 2.0-liter TFSI turbo-four cylinder, the V6 models ditch the old 3.0-liter supercharged engine for Audi’s newer 3.0-liter turbocharged V6 paired with a 48-volt mild hybrid system. It twists out 340 hp and 368 ft lbs of torque from 1,370 to 4,500 rpm—that’s up 11 ponies and 43 ft lbs over the outgoing unit. It’s hooked to an eight-speed Tiptronic gearbox, and quattro all-wheel drive gets the power to the ground.

The V6-powered versions of the Q7 are mild hybrids mated to an eight-speed Tiptronic gearbox.  Photo: Courtesy of Audi AG.

The hybrid system incorporates a lithium-ion battery and a belt-driven alternator/starter (BAS) that recoups kinetic braking energy, which is used to augment various electronic systems. There’s also a fuel-saving coast function wherein the V6 decouples and shuts down when conditions allow.

The 48-volt system also allows for the Q7’s new active roll stabilization that, in the words of the Audi suspension engineer who rode in the back seat, is the key to taming the inherent body roll of a high-riding crossover while also maintaining acceptable ride compliance. He wasn’t going to get an argument from me.

The second-gen Q7 has always been one of the sharper handling vehicles in the segment, yet this red 2020 S-Line specimen I was piloting, loaded up with optional air suspension, active roll stabilization and rear-wheel steering, seemed to shrink down a couple of sizes as I picked up the pace on a few stretches of the Ring. It carved an accurate and poised path, effortlessly slicing through the twisties with nary a hint of slack or roll, helped along by the new quicker steering ratio—2.4 versus 2.9 turns lock to lock. And never was the ride jarring. The engine feels strong and lag free too. No fuel economy figures were available at this launch, but Audi claims the numbers are improved.

Inside, all 2020 Q7 models get Audi’s new dash architecture that replaces the long-serving MMI interface with dual central haptic-feedback touchscreens—a system that bowed in the 2019 Audi A8 flagship sedan and has since made its way into the A6, A7 and Q8.

It’s a whole new way to interact with your Audi. The upper 10.1-inch screen deals with infotainment while the lower, slightly smaller panel controls vehicle functions. It also acts as a writing tablet for inputting navigation info and the like. The haptic buttons provide a modicum of feedback, and generally the system is easy to negotiate, offering the de rigueur pinch and swipe operation. It’s configurable display resolution is astoundingly clear and, with a processor, fifty times faster than the outgoing unit. Response time is instant. Factor in the standard 12.3-inch Virtual Cockpit that sits ahead of the driver, and you have acres of digital real estate.

As with all these new systems, basic tactile functionality takes a hit. Case in point—while piloting this rather large crossover over the always winding and at times incredibly narrow route, my attempts at changing the interior temperature via prods on the touch panel were mostly inaccurate and distracting. And that’s all I’ll say about that.

Outside we see a bolder grill, now with vertical strakes. Other visual tweaks include new wheel designs, slimmer headlights and taillights plus fresh sculpting of the lower flanks that help mitigate the Q7’s boxiness.

So yeah, there’s a lot going on here. We’ll see the 2020 Audi Q7 in the first quarter of next year. Pricing will be announced closer to launch and Audi assures us, despite all the Q7’s meaningful upgrades, its bottom line will not stray far from 2019 figures.