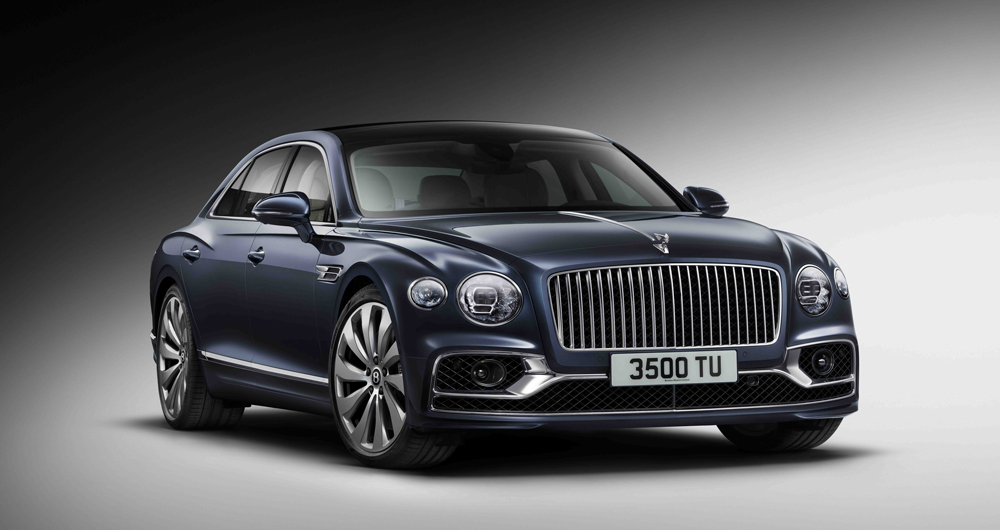 Bentley has pulled the wraps off an all-new Flying Spur sedan that it hopes will be the most-agile, most-dynamic, high-luxe grand tourer money can buy. Sharing its platform with Bentley’s latest Continental GT—as well as Porsche’s Panamera—this third-generation Flying Spur now comes with such driver-focused technology as four-wheel steering; active all-wheel drive (that defaults to rear-drive); and a quick-shifting, dual-clutch, 8-speed automatic transmission.

Oh, and we should mention that when this new Spur goes on sale early next year, it will become the world’s fastest sedan, with an Autobahn-burning 207 mph top speed.

Like the new Continental GT, the Spur gets its power from the latest version of Bentley’s turbine-smooth, 6.0-liter twin-turbo W-12. That means 626 hp—a 10 hp increase over the previous Flying Spur—along with a locomotive-like 664 ft lbs of torque. That’s a non-trivial 74 ft lb boost. It all translates into zero-to-60 mph sprinting in an impressive 3.7 seconds—over half a second quicker than before.

Answering criticism that the previous Spur lacked visual impact, Bentley design chief Stefan Sielaff has given the new car a much more muscular stance. Those broad haunches over the rear wheels, a wheelbase stretched by 5.1 inches (pushing the front wheels forward to the edges), plus the option of huge 22-inch rims, add to this new Spur’s more dynamic, and more dramatic, look.

The front end shares many of the design features of the latest Continental GT, but Sielaff has worked to give the new Spur its own character. The grille now features vertical black bars that hark back to the iconic 1957 Bentley S1 Continental Flying Spur. In addition, the hood gets the famous ‘Flying B’ mascot and, taking a leaf from Rolls-Royce, the ‘B’ levitates electronically and lights-up at night.

As far as size, this new Spur has barely changed from the out-going car. The big difference is the stretched wheelbase which dramatically increases rear-seat legroom—a crucial selling point for the chauffeur-focused Chinese market.

Inside, the cabin design takes many of its cues from the latest Continental GT, including the well-received spinning central dashboard panel that can rotate from plain wood, to a 12.3-inch touchscreen, to a trio of analogue dials.

As you’d expect, the cabin is awash with diamond-quilted leather, including stunning new raised quilting on the doors. There’s also a host of new wood veneer options, like Crown Cut Walnut, plus lovely bronze detailing around the clock and switches. Up above, there’s a huge new panoramic glass roof to flood the cabin with light.

The cabin is bedecked in diamond-quilted leather and a host of new wood veneer options.  Photo: Courtesy of Bentley Motors Limited.

Order books open for the new 2020 Flying Spur this fall, after the car’s global debut at Northern California’s Monterey Car Week in August. First North American deliveries are expected in the second quarter of next year. Right now, there’s no word on pricing, though expect a slight bump over the out-going car’s $230,000 starting sticker.