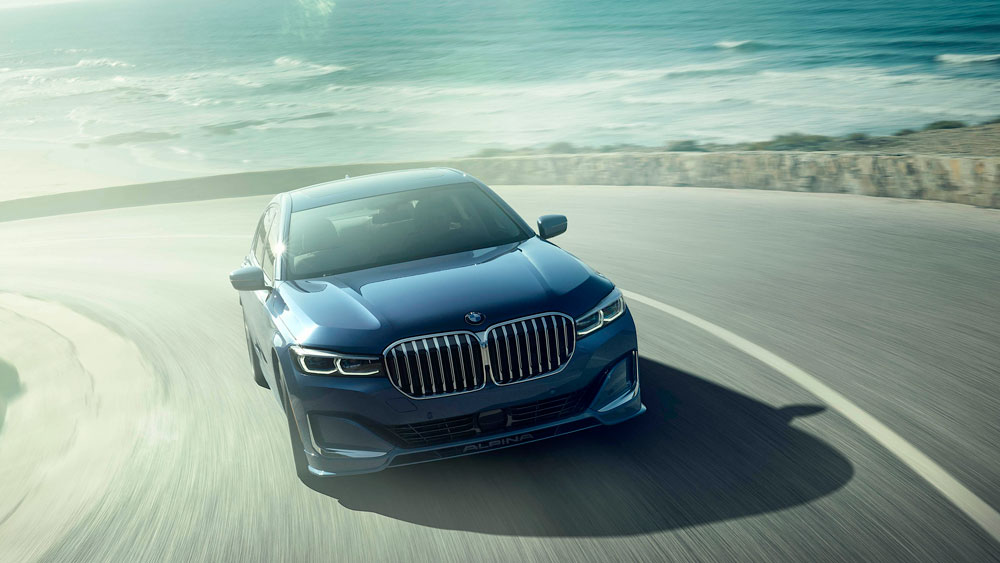 Until the day arrives when BMW decides to glue an M badge to the trunk of its flagship 7 Series, there’ll always by the Alpina B7. Alpina has been BMW’s official tuning partner since the 1960s, and as a measure of how closely the two Bavarian companies work together, just weeks after the global unveiling of BMW’s new-look 2020 7 Series—the one with the polarizing, over-sized kidney grille—Alpina has unwrapped its own, new-look 2020 B7 xDrive.

BMW should maybe take a lesson or two from Alpina’s design team because the B7’s new front-end body styling, with bold horizontal slats beneath that imposing new grille, and sculpted new side air intakes, adds even more visual impact to the latest model.

Power-wise, the new B7 retains the hand-built, twin-turbo 4.4-liter V-8 from the previous version. While there’s still 600 hp and an impressive 590 ft lbs of torque on tap, tweaks to the engine management software mean all torque is now available from 2,000 rpm instead of 3,000 rpm.

That, according to Alpina, should result in livelier throttle response and even swifter acceleration. The tuner now claims zero-to-60 mph sprinting in just 3.5 seconds, while aero improvements see top speed rising to 205 mph, up from 194 mph.

As before, the B7 rides on Alpina’s trademark thin-spoke 20-inch Classic rims, though the tuner is also offering new, high-strength, ultra-light 21s that cut the weight of each wheel by 20 percent.

In an interesting twist for the 2020 B7, Alpina is focusing more on refinement than in the past. To hush noise levels, especially in the back seats, sound shields have been installed in the rear wheel arches. There’s also thicker laminated glass fitted not only for the windshield, but also for the side and rear windows.

Sound shields have been installed in the rear wheel arches.  Photo: Courtesy of BMW AG.

As you might expect, this 2020 Alpina B7’s enhancements are reflected in the price. When deliveries kick off this fall, you’ll pay $142,695, though with only a handful of B7s sold each year, exclusivity is a big part of the car’s considerable appeal.