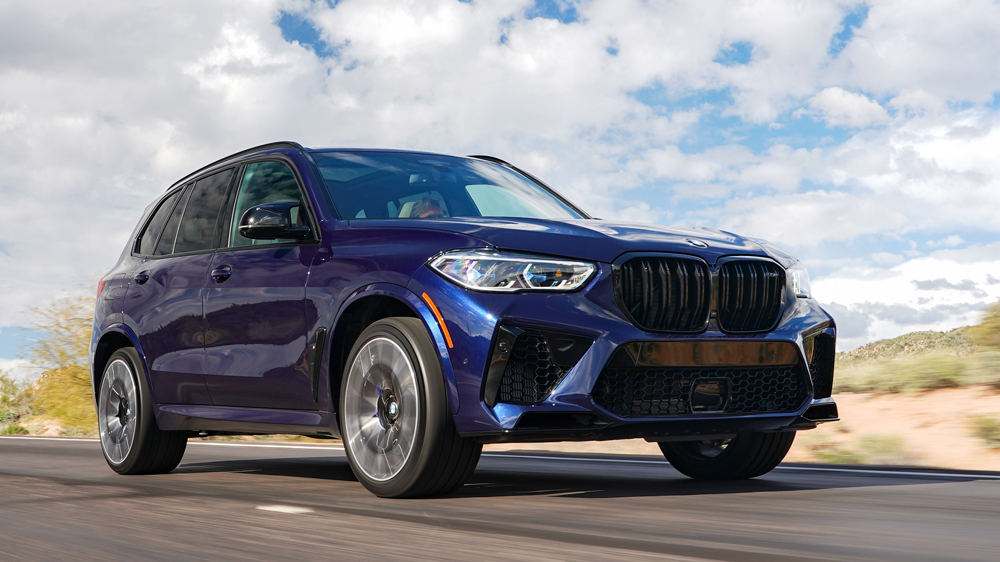 In 1999, when the renowned designer Frank Stephenson so adroitly translated BMW’s aesthetic into SUV form, the BMW X5 set a benchmark for the genre, winning accolade after accolade from critics the world over. In recent years, though, with the advent of ultra-high-performance luxury SUVs like the Bentley Bentayga and Lamborghini Urus, the X5 was overshadowed, at least in the speed department. Super-competitive by nature, thanks to an intense, decades-long involvement in motor sport, the German marque is hitting back, and hard, with the fastest, most powerful version of the model ever, the aptly named 2020 BMW X5 M Competition.

The variant’s twin-turbocharged V-8 generates 617 hp at 6,000 rpm, and twists out 553 ft lbs of torque in a nearly endless band, from an 1800 rpm blip of the throttle all the way to 5,860 rpm. Unleashing that torque in a straight line, the vehicle reaches 60 mph in 3.7 seconds (squarely between the acceleration times of the Urus and Bentayga). Equipped with the optional M Driver’s Package, the X5 M Competition maxes out at 177 mph—a shade less than the Bentayga (187 mph) and the Urus (189.5 mph), but with opportunities to probe limits of this magnitude so few and far between, numbers like these are, in essence, degrees of abstraction. Besides, a proper ultra-high-performance SUV, or in BMW parlance, Sports Activity Vehicle, should deliver a shot of adrenaline not just at the limit, but in the course of an everyday drive.

The most powerful X5 to date, the M Competition variant can reach 177 mph with the optional M Driver’s Package.  Photo: Courtesy of BMW.

In my case, an everyday drive might involve a jaunt to Northern California’s Marin County via the Golden Gate Bridge. I consider the Bavarian beast brooding in the driveway and, with all due respect to Frank Stephenson—whose subsequent credits include the iconic Fiat 500 and McLaren P1—realize that the M Competition edition may be the best-looking X5 yet. As muscular as it is massive, every angle honed for aggression, it also projects a certain seductive fluidity which is, in this case, accentuated by a lustrous, color-shifting coat of Tanzanite Blue Metallic.

The cabin displays an effortlessly chic aesthetic that has become a BMW trademark. Spacious and mercifully uncluttered, thanks to a gracefully slim touch interface easily mastered by the most ardent technophobe, its lack of distraction frees one to focus on the pleasures of the drive and, if you spring for the optional $3,600 Executive Package, the invigorating sensations of a Full Body Activation, courtesy of its massaging front seats.

But the highly bolstered Merino leather grip of the same seats is a reminder that this is no ordinary family transport, but a track-worthy machine. Toggling through the M driving modes, I become intrigued at the thought of sampling Track, until spotting the verbiage that warns, starkly, “Do not use on public roads,” and bump it back into Sport.

Getting to the bridge via San Francisco streets is faster than usual, thanks to the model’s super-sharp engine response, a prime benefit of the stiffer engine mounts unique to the Competition variant. Those stiffer mounts also sharpen turn-in from the chassis, giving the 5,425-pound automobile a nimbleness ideal for negotiating the urban thicket or, for that matter, a hard left-hander at Laguna Seca.

Cruising at a steady speed on the 101 North, the X5 M Competition felt as docile as one would expect of a premium SUV. Dig into the throttle, though, as I had to on realizing I’d almost missed my exit, and the twin 100 mm tailpipes erupt in a bellowing war cry. It’s a soundtrack that authenticates the performance hinted at by the carbon-fiber-trimmed dash and intimidating, red M1 and M2 mode triggers on the stout, leather-wrapped wheel,

On a secret, twisting route that links the freeway with West Marin, the example I’m in proves itself to be not only fast but surprisingly agile as it maintains the kind of brisk clip one would expect from a much smaller vehicle.

In the community of Marshall, on Tomales Bay, I stop at Tony’s, a 72-year-old seafood restaurant with a to-go menu that includes superbly fresh Manila clams in bulk. Thinking spaghetti alle vongole, I buy two pounds of the bivalves, packed in the merest scattering of ice. Can I get them home before it melted? In a lesser vehicle, perhaps not. In the X5 M Competition? No problem.