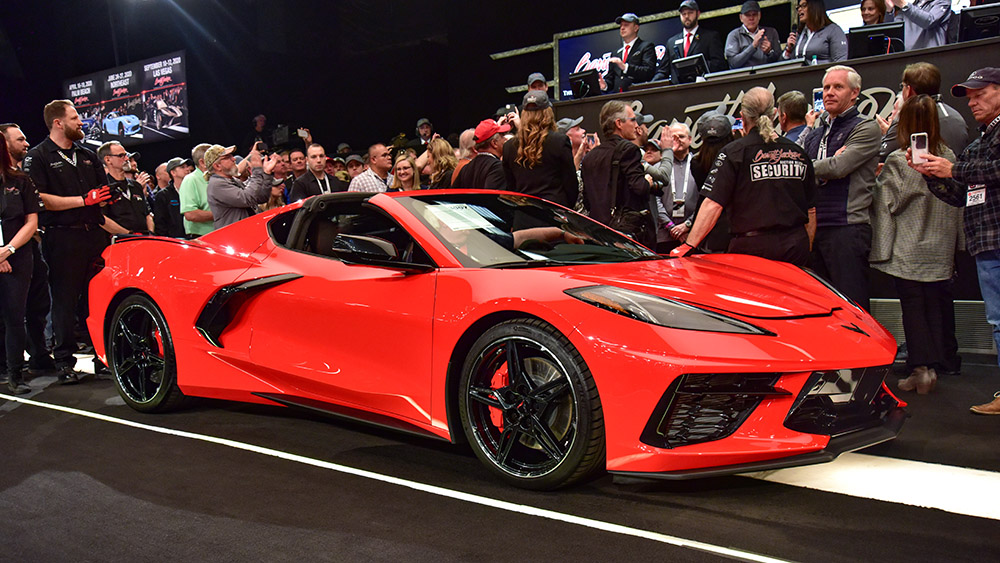 This little red corvette just won a princely chunk of change. The very first 2020 Chevrolet Corvette Stingray was snapped up at Barrett-Jackson’s Scottsdale auction on Saturday night for an eye-popping $3 million.

Bids for the flagship C8 kicked off at $200,000 and escalated quickly to seven figures in less than a minute before hammering down for an incredible 50 times the racer’s retail price of $59,995.

In line with the annual auction’s tradition of offering first editions of new performance cars for charity, the Corvette was donated by General Motors (GM) and all proceeds were given to the Detroit Children’s Fund, a nonprofit that supports the city’s schools.

The lucky buyer was none other than Rick Hendrick—the collector and owner of NASCAR team Hendrick Motorsports—who last year paid $2.5 million for a 2019 Ford GT Heritage Edition at the same auction.

The car, which Rick will eventually drive, looks a little different from the crimson machine that was on display at the Arizona auction. This pre-production model was just a placeholder; the forthcoming first production version—VIN 001—will be finished black on black and boast the Z51 performance package with special GT2 seats.

The redesigned C8 is the first mid-engine Corvette to exist and has its 6.2-liter LT2 V8 motor mounted behind the seats rather than in the front under the hood, giving it a racecar-like center of gravity. The car is capable of producing 495 hp and 470 lb-ft of torque, and with the optional Z51 performance package, it can reach 60 mph in less than three seconds, making it the fastest Corvette ever.

The next-gen C8 also has a sleek aesthetic that’s markedly different from its predecessors. The Corvette’s standard long nose and swooping curves have been replaced by lines that emulate European peers, like Lotus or McLaren.

A testament to this bold new design, the 2020 model recently won at the Oscars of the auto industry and was named the North American Car of the Year by a jury of automotive journalists.

The 2020 Chevrolet Corvette Stingray was the most expensive charity car sold at the week-long auction. All in, the nine charity vehicles raised around $7.6 million for various causes.