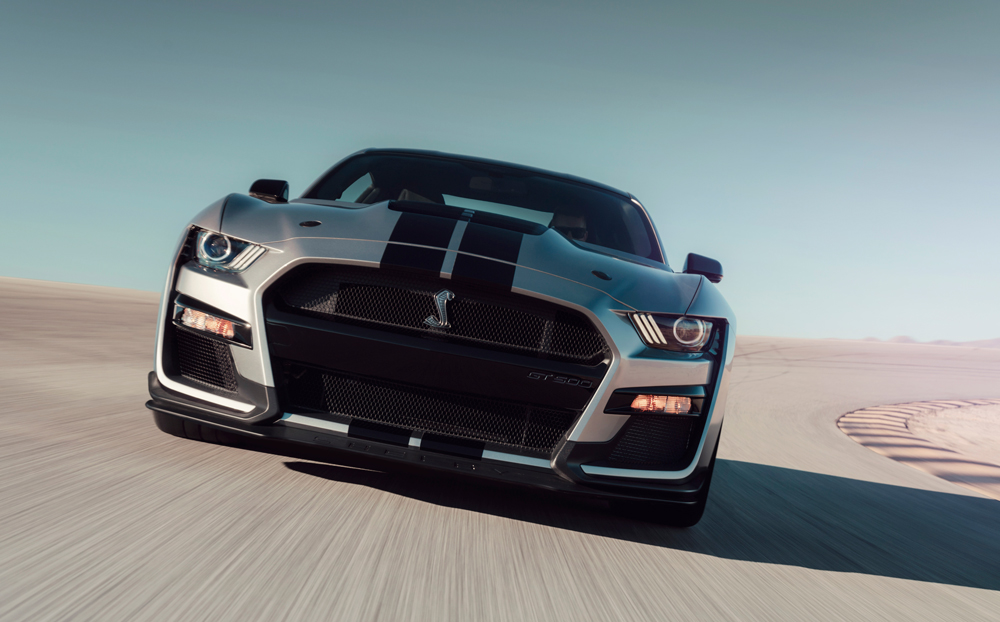 Carroll Shelby always said his favorite car was “the next one.” The late automotive designer and racing driver would swoon, then, for the 2020 Ford Mustang Shelby GT500, Ford’s most powerful production car to date. The GT500 dates back to 1967, where it debuted as the burlier, more exclusive successor to the Shelby GT350. With its “big block” 428-cubic-inch (7.0 liter) 428 Cobra-Jet V-8 engine, the original Shelby GT500 was the epitome of American straight-line horsepower.

The new Shelby GT500 is fitted with a 5.2-liter supercharged V-8 that Ford says will be good for more than 700 hp, topping even the latest Ford GT supercar, and will run the quarter mile in less than 11 seconds. (For comparison, the 2019 Corvette ZR1 does that dash in 10.6 seconds.) Shifts come from a seven-speed dual-clutch transmission borrowed from the Ford GT, and although purists might bemoan the lack of a manual option, Mustang’s marketing manager Jim Owens tells us the new gearbox will perform “far faster than even the best race car driver could.”

Contoured seats cradle occupants as they rocket through the quarter mile in less than 11 seconds.  Photo: Courtesy of Ford Motor Company.

Mustang design manager Melvin Betancourt and his team worked with engineers to accommodate the vast amounts of air the GT500 needs to suck in, and to manage the extreme heat it will put out. The car’s front end is dominated by a huge grille opening, which is almost double the size of the one used on the current GT350. The louver hood, with its massive power bulge, is the biggest Ford has ever made, and each of the quad exhaust pipes measures a capacious five inches across. An optional carbon-fiber performance package adds a big rear wing and 20-inch wheels with Michelin Pilot Sport Cup 2 tires. “That spoiler gave me heartburn,” Betancourt confesses, “but we found a way to make it functional and pleasing for us, too.”