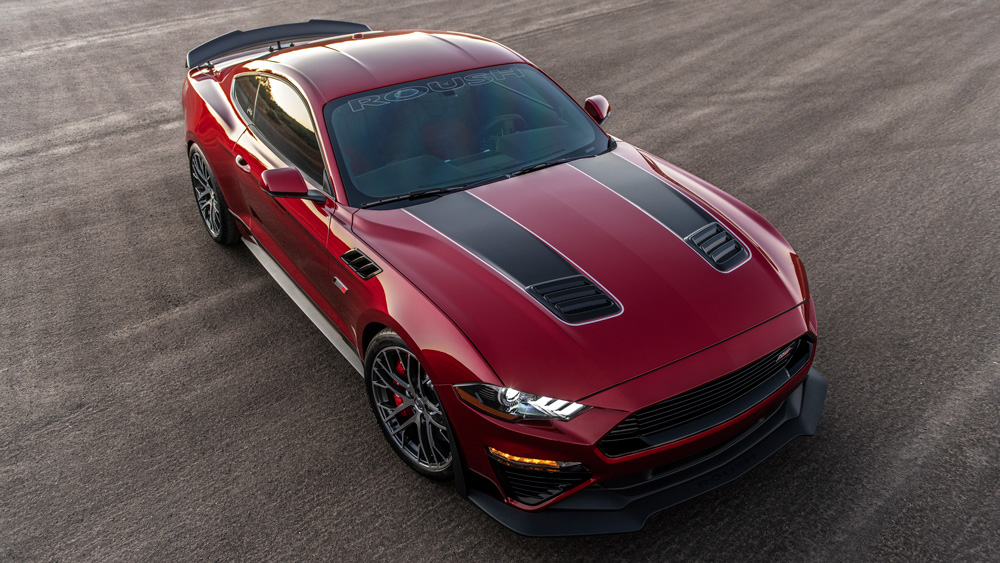 Since the Mustang’s inception in 1964, Ford’s pony car has been the perfect blank canvas for souped-up versions developed by third-parties, all created in the service of speed. The first was Carroll Shelby’s 1965 G.T.350, and for nearly 55 years since, designers and engineers have added their own twist to the go-fast formula.

One company that stands apart is Roush Performance, who distinguishes itself as a pre-title manufacturer, obtaining cars directly from Ford, adding proprietary modifications, then sending the finished cars back to Ford dealerships, which are the only places customers can order them. A full Ford warranty backs every Roush, a reassuring detail with cars that nearly double the original Mustang GT’s power output.

The latest Mustang to buck down the stall is the Jack Roush Edition, which is, notably, equipped with the most powerful engine ever dropped into a Roush Mustang. Built to commemorate motorsports icon Jack Roush’s induction into the NASCAR Hall of Fame, the eponymous Mustang made its debut at the 2019 SEMA Show on November 4 in Las Vegas. Production is limited to only 60 examples for North America, with up to 10 available internationally.

“There’s no better way to honor my father’s incredible legacy in automotive performance and motorsports than with our most powerful Mustang ever,” said Jack Roush Jr in an official statement. “This car features the most cutting-edge combination of Roush components ever assembled and we can’t wait for the lucky owners to experience what this machine has to offer.”

Along with the 60 cars allotted to North America, no more than 10 examples will be available internationally.  Photo: Courtesy of Roush Performance.

A real take-no-prisoners sports car, it features a Roush Phase 3 TVS R2650 supercharger, which boosts the Mustang GT’s original 460 hp, 5.0-liter Ti-VCT V-8 engine to 775 hp, with 670 ft lbs of torque. Along with Ford’s exemplary 10-speed automatic transmission, it is available with a 6-speed manual gearbox—making it one of the few high-performance cars offering the delights of the heel-and-toe tap dance.

This 775 hp V-8 is the most powerful engine in a Roush Mustang to date.  Photo: Courtesy of Roush Performance.

Because power alone is only part of the performance equation, the Jack Roush Edition features a Roush exhaust system with H-pipe, which allows drivers to tailor not just performance, but the sonic signature of the engine through four different user-selectable exhaust modes. A power-train cooling package adds larger low-temperature radiators, and additional coolers for the engine, transmission and differential.

Drivers can tailor the car’s sonic signature of the engine through four different exhaust modes.  Photo: Courtesy of Roush Performance.