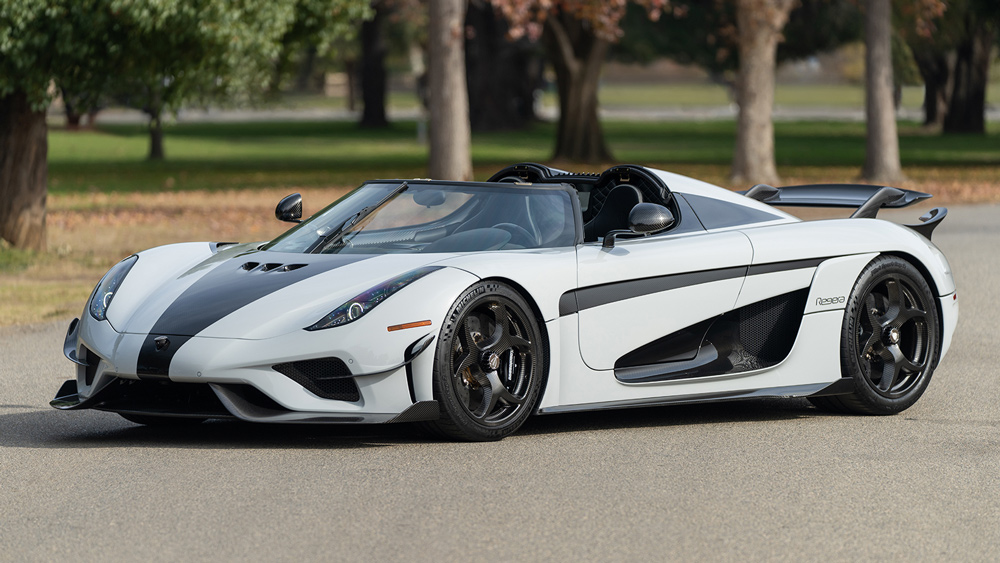 While last century’s supercar pioneers included Ettore Bugatti, Enzo Ferrari and Ferruccio Lamborghini, the new millennium has its own crop of names famous for redefining the limits of power and performance. Somewhere at the top of that list, possibly the very top, is Christian von Koenigsegg, founder of Koenigsegg Automotive AB.

Some of von Koenigsegg’s models have sold out even before production began, so it’s understandable that when an example from his extremely limited-edition line becomes available, the race is on for collectors. Well, buckle up, because a 2020 Koenigsegg Regera will cross the virtual block at Gooding & Company’s Geared Online Scottsdale auction, which runs January 18 through 22.

The Regera, unveiled in 2015, is a more refined and street-friendly alternative to the track-focused Agera and debuted a new hybrid powertrain solution. “I’m not a fan of the traditional hybrid car,” said Koenigsegg when he introduced the Regera on the exhibition floor of the 2015 Geneva International Motor Show. “So this car has direct drive from the combustion engine to the wheels, with only a final drive unit in between . . . when driving on the highway in that mode, without using electric motors, it’s the world’s first car that has a combustion engine driving the wheels with no gearbox in between.”

Only 369 miles were driven from the cockpit.  Photo by Mike Maez, courtesy of Gooding & Company.

The Koenigsegg Direct Drive configuration eliminates the conventional transmission and adds an electric motor at the crankshaft. The more streamlined approach also results in reduced mass, for a curb weight of just 3,505 pounds. The innovative powertrain delivers a total of 1,500 hp (1.11 megawatts) and 1,475 ft lbs of torque, which propelled the Regera from zero to a whopping 248.5 mph (400 km/h) in just 22.87 seconds, besting its Agera RS sibling for the world record in that category.

Gooding & Company specialist Hans Wurl calls the Regera “a technological tour de force,” telling Robb Report that “from its hybrid system to its Koenigsegg Direct Drive unit and hydraulically actuated body panels, the entire car pushes the boundaries of what we think a supercar should be.”

From its original starting price of $2,213,000, the US-spec Regera that will be presented by the Los Angeles–based auction house features an additional $710,000 in upgrades, including aero enhancements that add 20 percent more downforce, an extra 200 hp (on E85 fuel) and additional carbon-fiber components, including the $57,000 carbon-fiber wheel package. Estimated to fetch as much as $3.5 million, the car, which will be delivered by its original owner, has just 369 miles on the odometer.

“It really is a golden era for performance cars, and Koenigsegg is at the pointy end of the spear in terms of ingenuity and performance,” says Wurl. “Regera owners possess bespoke and innovative automobiles that set new parameters and are changing the landscape of their industry. Time will look fondly on these cars and their legacy.”