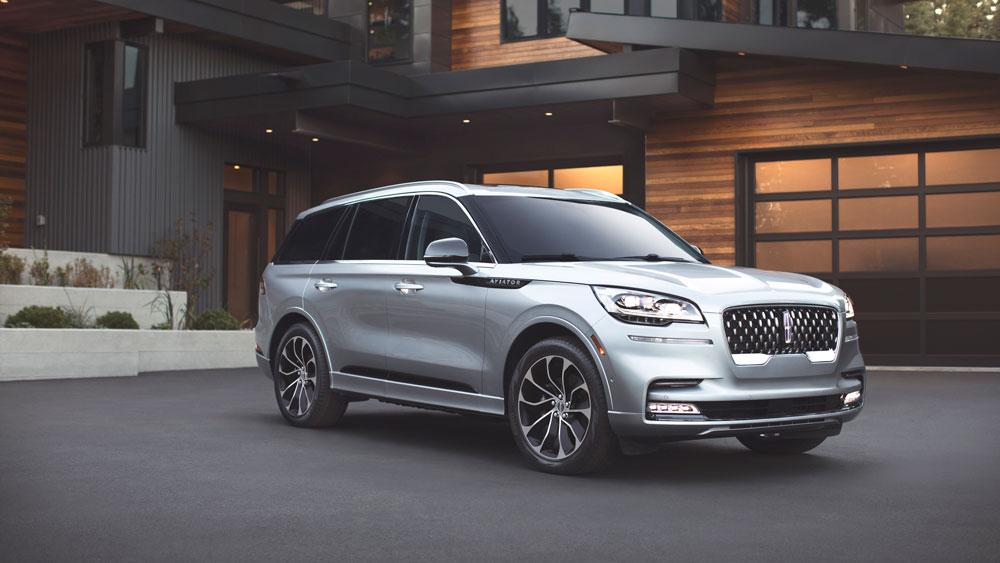 The production version of the Lincoln Aviator SUV was revealed ahead of this year’s Los Angeles Auto Show, showing off Lincoln’s most powerful model yet and promising a serene alternative to already established players. Three-row midsize SUVs are the best-selling vehicles in the U.S., and Lincoln hopes to steal away market share from the likes of the Lexus RX, BMW X5, and Audi Q7.

The 2020 Lincoln Aviator varies little from the early prototype we saw at the New York Auto Show earlier this year. Lincoln design director David Woodhouse tells us that the only changes were the tire size and slight modifications to the interior and exterior color schemes. The most powerful of these is the Grand Touring plug-in hybrid, which for the first time in Lincoln’s history pairs a twin-turbocharged, 3.0-liter V-6 engine with an electric motor, good for a combined 450 hp and a hearty 600 ft lbs of torque. “Aviator was designed for electrification from the start,” says John Davis, Lincoln’s chief program engineer. Also available is the standard gasoline variant, which uses the same V-6 engine paired with a 10-speed automatic transmission. That power-train combination produces 400 hp and 400 ft lbs of torque. All ride on a new rear-wheel-drive architecture, with optional all-wheel drive.

The Grand Touring edition of the Lincoln Aviator.  Photo: Courtesy of Lincoln.

As with other Lincoln models, the Aviator will be offered in the top-of-the-line Black Label trim with special colors and enhanced trims. The “Flight” theme features a Luggage Tan interior with ebony accents. Woodhouse notes that the leather trim boasts six stitches per inch, a mark of high-quality craftsmanship.

Cabin quietness and ride comfort reign in the Aviator.  Photo: Courtesy of Lincoln.

Lincoln’s aim in recent years is to set itself apart by what executives call “humanizing” the brand. It’s why the newest models have names, instead of letters and numbers. The drive modes are according to feelings instead of the mechanics (“Excite,” for example, takes the place of the more traditional “Sport”). To that end, Lincoln also worked with the Detroit Symphony Orchestra to compose and record actual music for its alert chimes, instead of using electronic sounds. As with all Lincoln vehicles, owners will have access to Lincoln’s remote pick-up and delivery, concierge services, and other perks.

Cabin quietness and ride comfort are top goals for Lincoln. The adaptive suspension system uses a camera to detect bumps in the road and pre-adjusts the suspension accordingly. Adaptive pixel LED headlamps enable better night vision by projecting farther down the road at a narrow width at higher speeds, and at a wider width at slower speeds.

Also new for the Aviator is the “Phone as Key” technology, which allows owners to start and unlock their cars—as well as set vehicle preferences—with their smartphones.

Designers and engineers collaborated on the Aviator to give passengers the feeling of “quiet flight,” or being in a near-silent, private jet. “We all worked closely to stay true to our essence,” Woodhouse said. “We wanted to project that quiet feeling of gliding.”