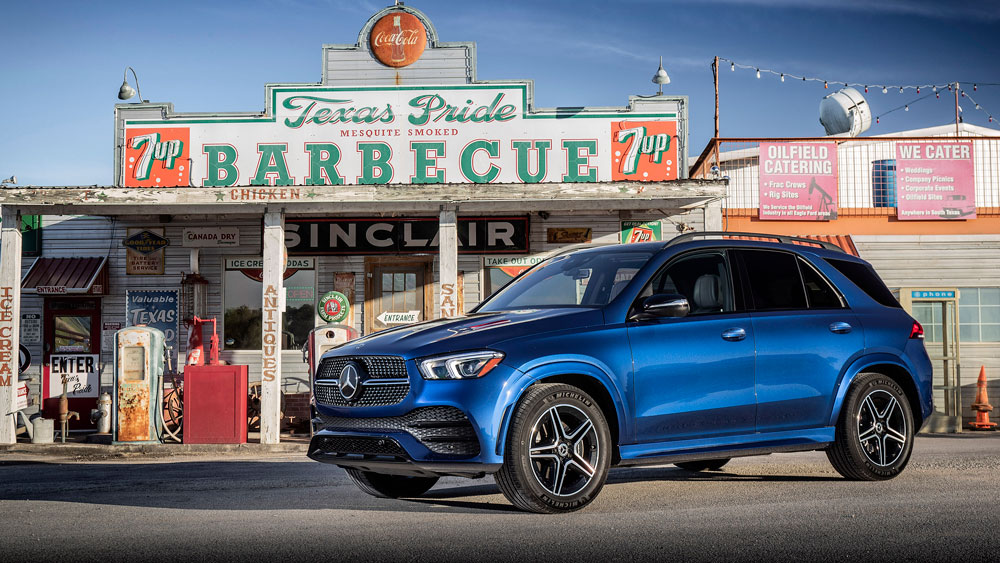 The lights go out in the driveway of Hotel Emma, a former prohibition-era brewery in the hip Pearl District of San Antonio, Tex. Loud techno music starts and a spotlight comes up on the new Mercedes-Benz GLE, which gyrates vigorously to the beat. Journalists and bystanders stop to watch the spectacle, and the German technician running things, a veritable Swabian Wizard of Oz, beams with pride. But this isn’t some gratuitous sideshow, it’s a computer-programmed demonstration of the GLE’s new E-Active Body Control air suspension, which can move each wheel up or down independently up to four inches. Combined with a camera that scans the road ahead, this first-of-its-kind feature smooths out the bumps and can even work the vehicle out of snow or sand.

But there’s more to the new GLE-Class than just a suspension upgrade (although it does make for a cool party trick). Mercedes-Benz’s best-selling SUV, available with a more upright stance or in a swoopier coupe version, is revamped for 2020 with a new look and a host of driving improvements.

Dealer deliveries are expected to begin this summer.  Photo: Courtesy of Mercedes-Benz.

“It’s a challenge to make the [new] car different, but not too different, so people don’t say the next one just looks the same,” says Mercedes-Benz’s director of exterior design, Robert Lesnik. One way the Slovenian designer’s team met that challenge was through tweaked proportions. Built on the company’s latest scalable SUV architecture, the new GLE has a longer wheelbase and space for larger wheels. “It got bigger and wider, but the idea was to make it look rounder and smaller,” Lesnik says. The front grille, air intakes, headlights, and tail lamps have been reshaped, and the distinctive creases found on the previous version have been softened or deleted altogether. “We went for a cleaner car,” Lesnik continues, echoing previous comments by the brand’s design chief Gorden Wagener, who is always urging his team to “take a line off.”

The GLE-Class will initially be available in two variants in the United States. The GLE 450 4MATIC is powered by Mercedes-Benz’s formidable new inline-6 turbocharged engine that makes 362 hp and 369 ft lbs of torque, along with a 48-volt electric starter-generator which helps to power auxiliary functions (including the bouncy suspension bits) and give an extra performance boost of up to 21 hp. The GLE 350 is available in all-wheel- or rear-wheel-drive variants and uses a 2.0-liter, turbocharged inline-4 that puts out 225 hp and 273 ft lbs of torque. Both models get a nine-speed automatic transmission. For those licking their chops for a more powerful model, there’s the recently announced Mercedes-AMG GLE 53, but it won’t go on sale until the end of next year.

Through Texas hill country, the GLE 450 proves quiet and extraordinarily comfortable. Not only did the interior designers do a fantastic job on the contoured seats and improved ergonomics, the engineers get kudos for the optional curve function, which leans into the road (as with a motorcycle), leveling out the ride and reducing the chance of motion sickness from pulling too many lateral Gs. Add a stiffer chassis and variable all-wheel drive, which constantly adjusts torque distribution between axles, and you’ve got an all-around performer ready for a long weekend with—or away from—the family. The new GLE also gets the latest suite of Mercedes-Benz’s semi-autonomous driving systems, including automatic steering, active cruise control, and a new cross-turning function, which will automatically apply the brakes if oncoming traffic is detected while the driver is trying to turn.

Second-row passengers get more legroom than before thanks to the new GLE’s longer wheelbase, and an optional, folding third row means the midsize crossover can fit a total of seven people. It bears repeating that Mercedes-Benz is currently doing some of the best interiors in the biz, and the GLE gets the same dual-widescreen treatment found on the S-Class, E-Class, and other recently redesigned models.

The GLE 450’s plentiful passenger space at the back.  Photo: Courtesy of Mercedes-Benz.

Central to Mercedes-Benz’s push for better in-car technology is the inclusion of a voice-activated assistant, similar to Amazon Alexa or Google Home. Anyone in the car can simply say “Hey Mercedes” to access navigation or other vehicle functions, or to ask any of life’s burning questions. This became a running source of amusement for me and my driving partner, whose requests became progressively more absurd. Actual (G-rated) examples include:

Hey Mercedes, I need a massage.

“Turning on the massage function.”

Hey Mercedes, I want a taco.

“Searching for Mexican restaurants near you.”

Hey Mercedes, what you do think about BMW?

“They’re nice. I like seeing them in my rearview mirror.”

Hey Mercedes, tell me a joke.

“Sorry, I was made by German engineers.”

Novelty factor aside, the MBUX voice assistant, which sends requests to the cloud to process and return, is far more sophisticated and helpful than competing systems made by BMW or Audi. Through artificial intelligence, the system can also learn drivers’ habits and will suggest who to call or what music to play based on past patterns.