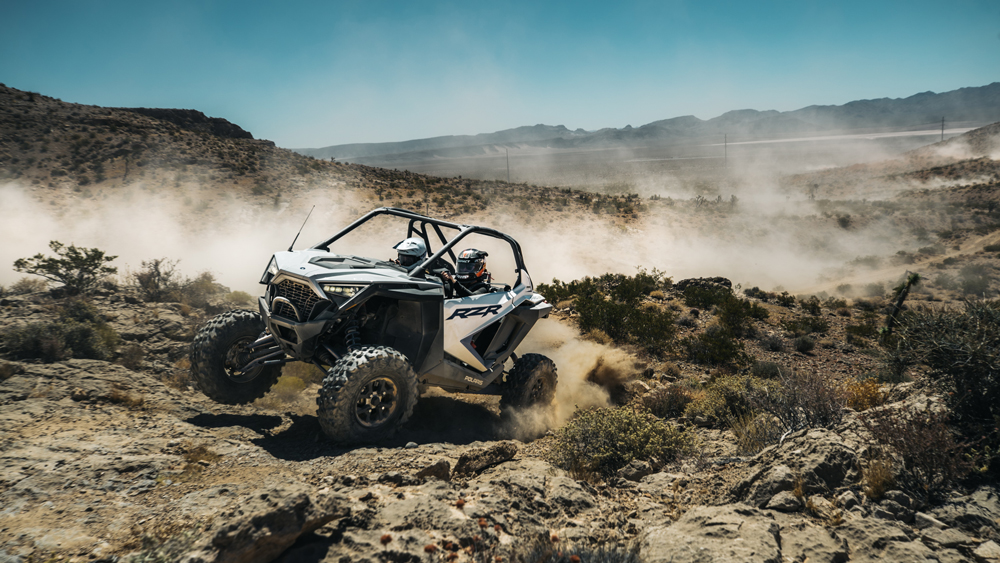 Bombing through the desert at 50 mph, just outside of Las Vegas, I can feel the earth constantly shifting and undulating under the knobby 30-inch tires, making the suspension earn its pay. Both hands are sawing at the steering wheel in an attempt to stay pointing in the right direction and without lifting off of the throttle, I use my left hand to wipe the dust from my goggles so I can see more than five feet down the trail. My stomach goes light. I’m now unexpectedly airborne and the ground is approaching just as quickly as I left it. At this point, my right thumb instinctually presses a little red steering wheel-mounted button. It stiffens up the suspension in milliseconds, the tires touch down and the skid plate stays off the sand—my spine is eternally grateful. That tiny piece of rubber, which Polaris affectionately refers to as the “oh s%$t” button, is just one of the many inspiring details on the brand new 2020 RZR Pro XP.

As wild and harrowing as a night on the Vegas strip can be, all you have to do is drive 20 minutes south on Interstate 15 and you’re in the middle of an even more unforgiving environment, the roughest terrain Nevada has to offer. The surrounding area lays claim to the starting lines of both the Mint 400 and Vegas to Reno, (two of the longest and most punishing off-road races in the country) as well as the oasis that is Speed Vegas: A high-performance automotive playground replete with dirt and tarmac race tracks and access to a web of treacherous rock- and rut-littered trails. Or, as Polaris sees it, the idyllic location to launch the all-new range-topping RZR.

Polaris is indisputably one of the founding fathers of the performance UTV segment and, as of 2019, its top-of-the-line RZR XP Turbo S is an established fan-favorite in the off-road community. However, competition from Can-Am and, most recently, Yamaha and Honda have kept the Minneapolis-based brand on its toes. Efforts from rivals mean that simple yearly refreshes and minor updates won’t cut it, which is why Polaris went over the top for 2020.

At the official unveiling in the garage at Speed Vegas, RZR Marketing Manager Evan Schendel went so far as to say, “The Pro XP is better than a Turbo S in every way: This thing destroys the Turbo S.” Schendel claimed the base level Pro XP is faster around their test track than the Turbo S as well, which is a bold statement to admit considering the new kid on the block goes for $5,000 less.

The first order of business when putting the Pro XP together was the cockpit. Sliding down into the driver’s seat and strapping into the four-point harness, I found that the upgrades were immediately obvious. When they began building it, the engineers started with just the seat, the steering wheel, the pedals and the chassis, sculpting the machine around the driver.

The bucket seats are lower, further back and have more range of adjustability than previous RZRs. The new seating position translates to a much more planted, stable feeling, which comes in handy sliding with an excessive amount of speed into off-camber corners, sawing at the wheel trying to stay pointing in the right direction. The new multi-directional telescoping steering wheel makes life in the captain’s chair even more confidence-inspiring, now that you can basically mold the cockpit to your liking. However, all that driver-hugging architecture and design isn’t worth a damn if you can’t put it to use.

Polaris tuned everything it possibly could to make the Pro XP’s performance practical and useable. Instead of keeping all the thrust down low in the speed range, where it’s only good for zero-to-60 mph launches, it now lives in more practical territory. Using a refined race-bred CVT transmission, the 925 cc twin-cylinder turbocharged engine’s 181 hp is put to work in the 20 mph to 50 mph range, right where it makes the difference powering out of turns. And it’s in the high-speed corners where the Pro XP shines.

Between the updated adjustable Dynamix suspension (the ‘oh s%$t’ button comes standard), the 22 inches of usable travel and the 96-inch wheelbase (which is longer than your average two-seater SxS), the Pro XP corners remarkably flat and floats over dips and crests. Even as I mash the throttle, stepping the tail out, there’s no sense of ‘I’m about to roll this thing.’ The suspension just chatters away, the tires hook up and I slingshot out of the bend and on to the next kink in the road.

However, where things get oddly unnerving is at medium speeds. Polaris tuned the power steering for the Pro so that it’s more forgiving at high speeds and increasingly communicative at slower speeds. But something happens somewhere in the middle, when you’re not quite pinning the throttle but you’re not lazily cruising around. The steering feedback finds a dead spot and goes numb like it’s vaguely connected to the wheels. Going faster is one quick and easy solution, but I hope Polaris dials the power steering in before the base model Pro XP hits dealership floors next January with price tags starting at $22,999 and topping out at $28,499 for the fully loaded ‘Ultimate’ trim level (Premium and Ultimate variants are available now).

After a day in the dirt, stress-testing Polaris’s newly minted halo model, there’s no denying the off-road performance bar is now a few notches higher. Is the Pro XP the perfect machine? No. Polaris still has a few kinks to work out before making that declaration. But is the Pro XP a massive step up from the Turbo S? That’s unquestionable.