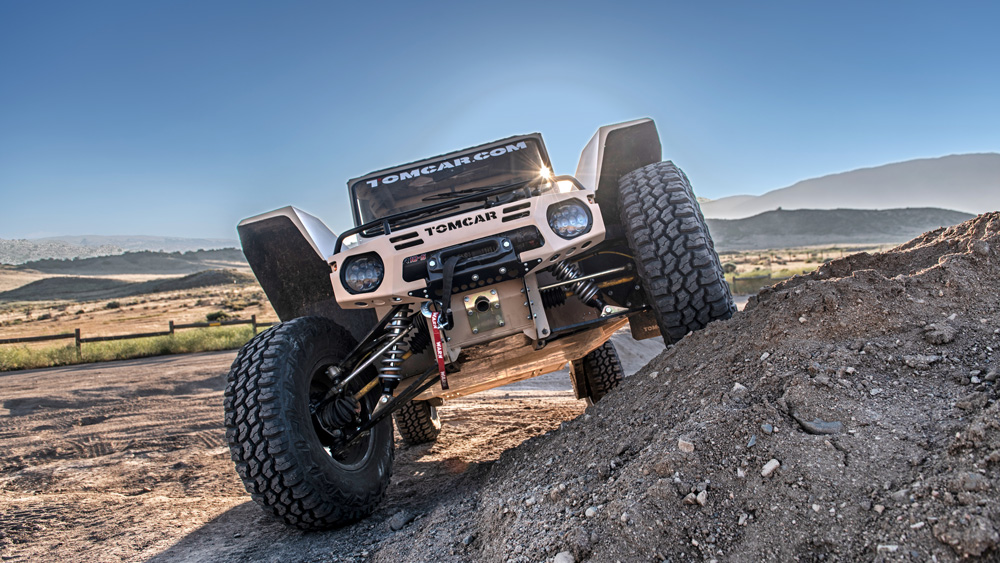 The boulder-strewn incline looked as if Sisyphus himself had been banished there. The probability of making it up without incident seemed negligible, but then I had never been behind the wheel of the Tomcar TX. The four-wheel-drive dynamo sliced through the rugged terrain of Southern California’s mountainous hinterland like a scalpel through gelato. I shouldn’t have been surprised, however, since its no-nonsense design, precision, and tactical efficiency are reflective of the first client it was developed for—the Israel Defense Forces.

“Tomcar was originally designed for maximum versatility and survivability in military application as opposed to being for recreational use,” explains Ram Zarchi, CEO of Tomcar. “Its development started during the Six-Day War, the concept of a very durable, over-engineered vehicle. Actually, the dimensions of the Tomcar today are still based on the ability to fit three cars on a helicopter. Since 2005, we have based the company in America and all the vehicles have been made in Arizona.”

The Tomcar gets its name from Ram’s brother, a retired Israeli Air Force pilot. The latest version—equipped with a fully welded steel frame and roll cage—comes in three customizable variants: the TX3, a two-seater with 120-inch wheelbase, 17-inch ground clearance, and a 2,700-pound payload capacity; the TX4, a four-seater with the same wheelbase and ground clearance as the former but with a 2,500-pound payload capacity; and the TX5, a two-seater with a 106-inch wheelbase and the ability to bear a payload of 2,600 pounds. A winch rated to 10,000 pounds, electronic power steering and a dual-fuel tank are also included.

At the heart of each all-terrain titan is a choice of three power-train configurations; diesel, conventional gas, and electric. In addition, a hybrid option is also offered, but solely for the TX3.

“The 2020 models have a very unique combination of long range, high-performance for off-road, high payload, safety and durability. You will also be able to carry a 3,000-pound payload for hundreds of miles. Everything is easy to replace or has redundancies,” notes Zarchi. “And they are built on a frame that’s 100-percent proprietary with a lifetime warranty.”

Piloting the TX4—that carries an automatic continuously variable transmission—I feel like I am barely tapping into the 107 hp, 1.5-liter four-cylinder engine’s 80 ft lbs of torque, even up rutted and silted hill climbs. What must the electric version, with its 120 hp, 96v 3 Phase Dual AC motor with 206 ft lbs of torque, feel like?

Key to my rising confidence level is the Tomcar TX’s four-wheel independent suspension, with 13.5 inches of travel in the rear trailing arms and 14 inches for the front dual arms. My naiveté as a novice would have been my undoing had it not been for the Tomcar’s forgiving nature.

My ingress and egress through technical sections on descents had the TX4 pitched at unlikely angles. I know this because Zarchi, my passenger, nonchalantly mentioned more than once that we would have just tipped over in any other transport. But that’s one of the car’s characteristics that Zarchi is proudest of. “We managed to significantly increase the performance specifications of the TX without losing the stability and low center of gravity of the original Tomcar,” he mentions. “It remains an extremely easy off-road vehicle to drive even when facing extremely challenging terrain.”

Also made fairly easy is acquisition. The Tomcar TX is available now at a starting price of $37,300.