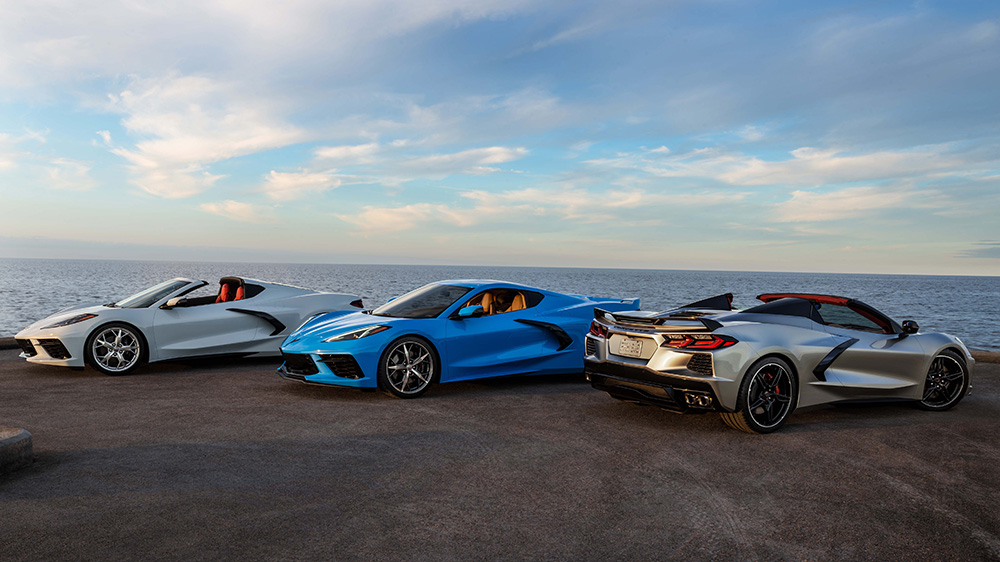 Nearly a year after its debut, a little bit of the novelty surrounding the C8 Corvette has worn off. So, Chevrolet is shaking things up slightly for the coming model year, offering new standard features and new interior and color options.

The Detroit automaker unveiled the base-model 2021 Corvette Stingray coupé and convertible on Thursday. And, while it is still basically the same mid-engine sports car that made critics and enthusiasts swoon when it debuted last July, a number of subtle upgrades and new options may be enough to win over the remaining skeptics.

Let’s start with the new standard features. The base-model C8 now includes Wireless Apple CarPlay and Android Auto capabilities, according to a press release. Its gauge cluster has been given a makeover, too, and offers several new on-screen visualizations, including a digital tachometer for track driving, which is great news for anyone who dreams of really pushing the vehicle to its limits. GM’s Buckle to Drive safety technology is also now standard, ensuring you can’t shift the vehicle out of park until you’re buckled up.

If those new standard features don’t get your heart racing, the raft of new design options will. The car is available in two new colors, the bold Red Mist Tintcoat and the stately Silver Flare Metallic. Inside the car, your choices now include the Sky Cool Grey and Yellow Strike interior color schemes. You can also add a dual racing stripe or Stinger stripes to the exterior.

Of course, the most exciting new feature may be the popular Magnetic Ride Control option, which uses magnetorheological dampers to smooth out your ride, even on rougher, less welcoming roads. The option can now be added to the car separate of the Z51 performance package.

Left untouched is the C8’s engine, and with good reason. The first mid-engine version of the iconic speedster is powered by a mighty impressive 6.2-liter V8 mated to an eight-speed dual clutch automatic transmission that produces 490 horses and 465 lbs-ft of twist. With that much grunt, it’s not a motor that will be in need of a major upgrade anytime soon.

Most attractive of all might be that the new features and options haven’t affected the C8’s starting price. Like the 2020 model, the 2021 ‘Vette will start at $59,995 for the coupé and the convertible at $67,495. Production of the inaugural C8, which has been hampered by a strike and the world health crisis, will continue until the fall, at which point Chevy will start building the 2021 model at its Bowling Green plant with deliveries expected to begin before the end of the year.