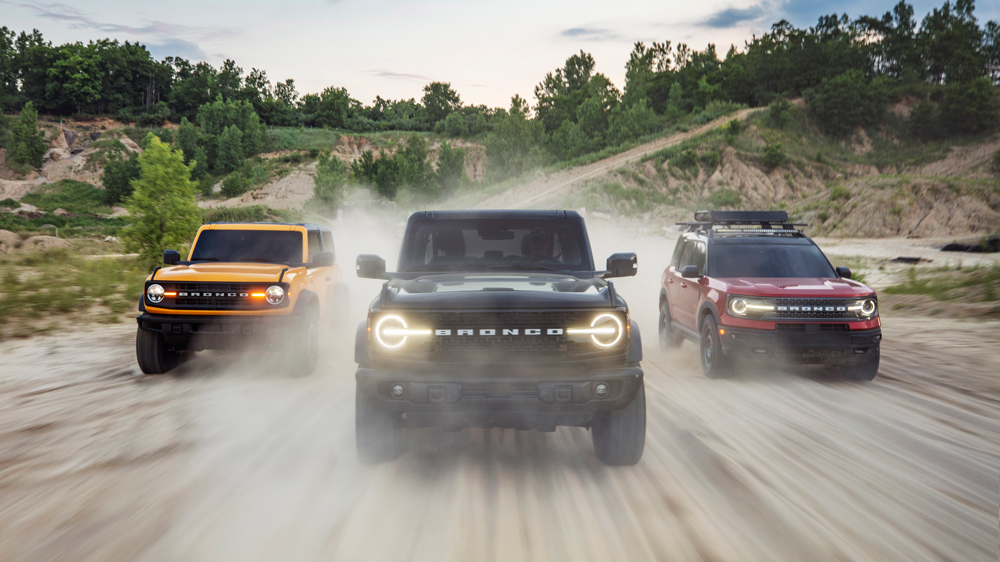 “We digitally scanned the first-generation Bronco of Ford’s vice president of design, Moray Callum. We moved that data into design software to hone the initial packaging for our Bronco,” says Paul Wraith, the man commissioned to lead design of the new 2021 Ford Bronco two- and four-door off-roaders.

Even with 21st century crumple zones—all new vehicles have long snouts to meet federal crash regulations—the new Bronco is not significantly larger than the original 1960s Velveeta cheese box on wheels. It’s 20 inches longer than the original, though eight of those inches are in the wheelbase, an advantage that will deliver far greater stability than the original ever had. The latest Bronco is narrow, just like the original. After all, in more extreme off-roading, it’s good to have slim hips.

“We used no scale models,” says Wraith. “We instead played with full-scale low-fidelity models made out of packing material.” The Bronco’s chief designer adopted a digitally driven American reinterpretation of the classic German Bauhaus theme of form follows function for the vehicle’s legitimate industrial design. Wraith’s team aimed for iconic American presence, capturing the slab-sided and sparsely detailed forms of the original Bronco, but also went farther, reaching for military-grade functionality, for REI and North Face reliability and efficiency in the wilderness. Bronco is no styling affectation. It’s a carabiner.

Wraith produced countless low-cost jigsaw puzzles that piece together as a full-size rolling toy, helping his team understand, in human scale, the architecture and function of an off-roader—of detachable doors and sightlines and control placement and break angles for attacking steep slopes.

“We doodled like movie producers, we storyboarded,” says Wraith. “And it’s here we developed solutions for things like tying down a canoe without scratching the hood, or attaching GoPros. These ‘activity doodles’ went straight to CAD.”

Like the original, the two-door 2021 Ford Bronco has slim hips for greater off-road agility.  Photo: Courtesy of Ford Motor Company.

The team also relied on virtual reality (VR). “We wrote new VR code to place Bronco into a range of wild environments.” In other words, a Bronco Holodeck to heighten imaginative thought while sitting in soggy old Dearborn, Mich.

Frameless doors can be easily detached, sheathed in canvas sacks, and slung into the cargo hold—a smart version of the detachable targa tops of 1960s sports cars and stow-and-go minivan seats. This replaces the need to chain the doors to a tree trunk or leave them in the garage, as happens with Jeeps. And remember the Creamsicle-colored Bronco in Clint Eastwood’s 1975 movie The Eiger Sanction? It went topless, and so can this one. The roof comes off in sections.

Bronco chief engineer Eric Loeffler wisely adopted proven mechanical and electronic systems from the Ford pickup and SUV parts bin, mixing them into a stout steel architecture related to the Ranger. In fact, it’s safe to call this a cut-down Ranger with a far, far more capable suspension system and a very thoughtful body design. The standard 2.3-liter turbocharged four-cylinder engine is the same found in the Ranger and, at very low revs, spools up 310 ft lbs of torque. Bronco’s most intriguing engineering feature is a new “6+1” manual seven-speed Getrag-engineered gearbox. First is a super-low “granny gear,” a crawler. Combined with low setting in the transfer case, Bronco should move inch by inch over rocks in Moab or high in the Sierra.

The top-spec 2.7-liter twin-turbo V-6 produces a creamy 400 ft lbs of torque delivered through a 10-speed automatic and electronic shift-on-the-fly transfer case. All the electronics, like the low-speed “cruise control” for moving at a few miles per hour over tough terrain, are adaptations of current Ford technology, all well-proven in Ford’s SUVs and the F-series. Front suspension is long-travel independent with A-arms, and there’s a robust Dana solid rear axle with electronic locking differential.

Frameless doors can be easily detached and stored in the cargo hold.  Photo: Courtesy of Ford Motor Company.

Bronco does not have a Coyote V-8 under its flat hood, as one might have hoped considering the original finished its production life with a 302 Ford small block V-8. The main issue apparently was crash structure with the weight of the V-8. However, the larger and much more powerful twin-turbo 3.5-liter V-6 will package, and that just might be the evolution in a few years. We can only hope that Ford has protected for inevitable market demand.

Inevitably, Bronco must be compared with the grizzled war veteran that served as benchmark and rival 55 years ago, the Jeep Wrangler. Bronco is within a few inches of Wrangler in every measure, not significantly larger. Will Bronco supplant Wrangler and older Willys Jeeps as king of the Rubicon Trail? Maybe not, but it should prove far more civilized and equally capable on anything short of “jeepers-creepers” adventures. Keep in mind, Bronco has minimal overhangs so it won’t scrape its chin or drag its hindquarters. The Bronco also has best-in-class ground clearance and the ability to ford streams. As one would expect, it has belly pans to protect critical pieces.

The two-door Bronco running without its roof.  Photo: Courtesy of Ford Motor Company.

Bronco is a niche product engineered to fit a relatively narrow application, though its parts-bin Ford drivetrain and electronics ensure it will serve as a daily driver for those who only camp a few weeks a year. Ford can market Bronco anywhere on the globe: coffee plantations in the highlands of Honduras or Nicaragua, rain forests in Indonesia or the Australian Outback and South African Veldt.

The more urban Bronco Sport is still ready to be loaded with gear.  Photo: Courtesy of Ford Motor Company.

Ford already owns the radical off-road truck market with Raptor. With the reimagined Bronco, Ford can challenge Jeep Wrangler and Gladiator for off-the-grid exploring. It’s not hard to imagine a Bronco pickup arriving in a few years, perhaps when Ford offers that 3.5-liter twin-turbo V-6 as an option.

The new four-door Bronco with a portion of its top detached.  Ford

As Ford launches Bronco this week, our presentation was a socially distanced Internet-based briefing—we haven’t seen the Bronco in the flesh yet or driven it—but we certainly want to. It arrives next spring, starting at $30,000.