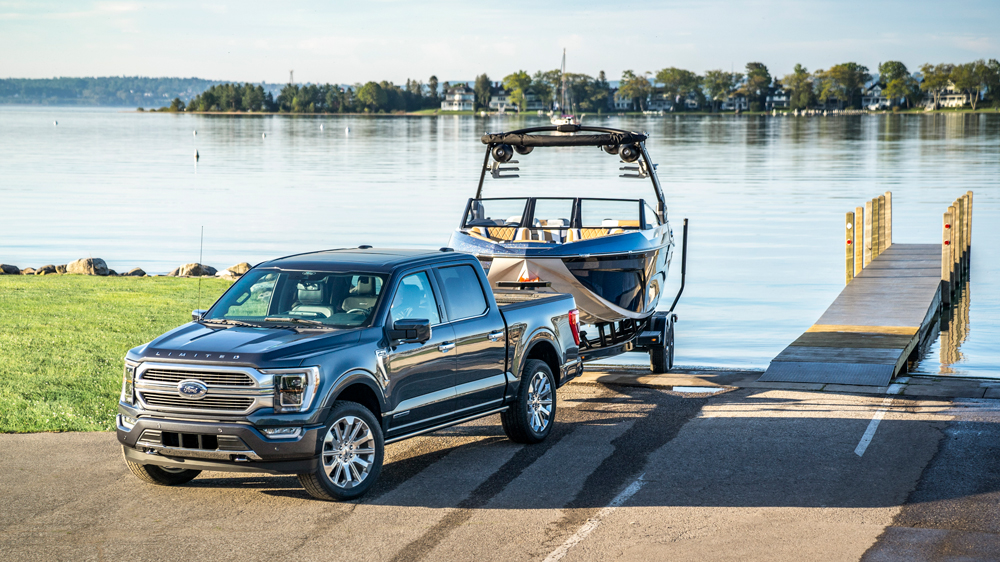 The 2021 Ford F-150, unveiled this week, boasts the most horsepower, torque and payload capacity to date. It’s the first fully hybrid truck in its class, combining a 3.5-liter V-6 with an electric motor that churns out enough power to tow 12,000 pounds. The stalwart workhorse can haul everything from vintage cars to concrete. And thanks in part to designers Barb Whalen and Lindsey Grant, the F-150 is now a more luxurious place for owners to spend time.

“When we started out designing the new F-150, we wanted to focus more on having those creature comforts of familiarity and to make the vehicle feel like a home away from home,” explains Grant, a color and materials designer whose past projects include the Lincoln Continental concept car.

Among those comforts include power seats that recline nearly 180 degrees and an optional interior work surface that makes it easy to use a laptop, do paperwork or grab a bite to eat. A new 12-inch center screen uses the latest version Ford’s SYNC interface with voice control and wireless connectivity to Apple CarPlay and Android Auto. An optional onboard power source replaces the need for a separate generator, and, according to Ford, can power 28 refrigerators or charge a bed full of electric dirt bikes. For Whalen, Grant and the entire color and materials team, making the most upscale F-150 yet meant honing in on rich leathers, unique textures and new color palettes.

Whalen, Ford’s color and materials design manager, is a 30-year veteran who’s left her mark on every Ford and Lincoln model during her tenure, including the Ford GT, the Lincoln Aviator and the forthcoming 2021 Ford Bronco. She explains that each of the upper-level F-150 variants has its own personality.

“The Platinum is more for an urban customer, with a more modern appearance,” she says. A caramel-and-black interior is accented with bold contrast striping on the seats, door panels and center console. Whalen and Grant are proud of the matte open-pore oak trim, which is cut to reveal the rings of the trees from which the wood is sourced. “We felt it was important to celebrate the rings of a tree; you can see its life right before your eyes,” Grant tells us.  “We felt it would really resonate with our customers, this enduring legacy of building something that outlives you.”

The F-150 King Ranch edition is an homage to the eponymous 15,500-acre compound in Kingsville, Tex., with cattle, thoroughbred horses, a museum and saddle shop. “It’s for people who relate to the ranch lifestyle,” Whalen explains. Grant adds, “We wanted to bring as much of the crafted lifestyle into this interior as we could; the woodworking, the furniture in the King Ranch mansion, the saddlery and leather craftsmanship.”

Whalen, Grant, and their team also developed a unique perforation on the seats, inspired by the shape of a rope twist. Other interior details include the ranch’s w-shaped logo and a laser etching of the King Ranch carriage house. “We were very intentional on how we laid the wood grain too,” Grant says, explaining that the pieces are book-matched and come together at a 45-degree angle.

Whalen says the “icing on the cake” is the F-150 Limited model, which is expected to reach upwards of $100,000 fully loaded. Grant and her team chose an admiral-blue color scheme with quilted seats and floor mats, and the leather is the same grade you’ll find on Lincoln’s Black Label vehicles. “Quilting is traditionally a luxury cue and denotes craftsmanship and adds comfort,” Grant says. She also points out the carbon-fiber trim, which is tinted with a blue clear coat. “In the past, we would reserve carbon fiber for the Raptor, but we used it in the new Limited to convey a sense of accomplishment.”

Inside the Limited edition is the same leather found in Lincoln’s Black label vehicles.  Photo: Courtesy of Ford Motor Company.

Despite the number of F-150s on the road, Whalen says the design team wants each customer to feel the truck was crafted just for them. “With the F-series, we support a fleet but we also have those customers who are trailing their yachts, their horses, their race cars—so while they’re using this vehicle for what it’s intended, they can still have those premium materials that they want and deserve.”