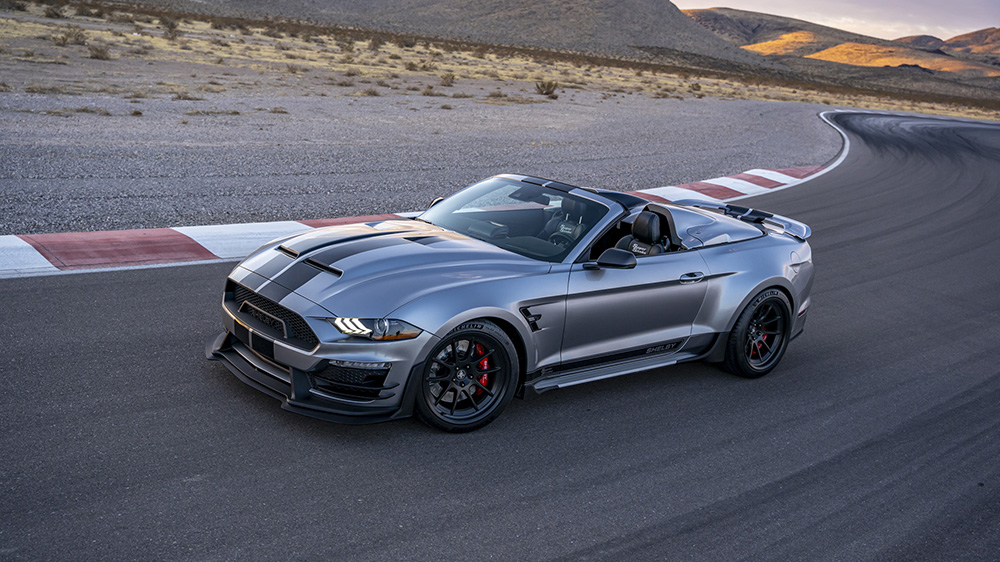 If you’re thinking about buying a convertible, performance may not be your first priority. For those who want the best of both worlds, however, Shelby American has just the souped-up Mustang for you.

Over the weekend, the Caroll Shelby-founded company unveiled its latest model, the 2021 Super Snake Speedster. The limited-edition vehicle was designed with two things in mind: driving with the top down and setting record lap times at your local track.

As you can imagine, there are quite a few differences between the Super Snake Speedster and your garden-variety open-top Mustang. The first, and most readily apparent, is the roof. While the factory convertible version of America’s most famous muscle car comes with a soft top, Shelby American’s features a custom-made hard-top tonneau system that turns the car into a two-seat roadster. Other Shelby-engineered modifications include a new front fascia, a ram-air hood with functional vents, aluminum wide-body front fenders, side rockers and a rear wing. Each example includes special Speedster striping and badging, and rides on 20-inch forged monoblock aluminum wheels wrapped in sticky performance tires.

The differences aren’t just superficial, either. Underneath its racing stripe-adorned hood you’ll find a supercharged 5.0-liter Coyote V-8 that churns out a whopping 825 horses. Even better—at least to some purists—the brawny mill comes mated to your choice of a standard automatic or optional manual transmission. Other mechanical upgrades that caught our eye include a Shelby extreme cooling system, Borla Exhaust system, Penske track suspension and massive Brembo brakes on the front and rear wheels.

“The new Speedster is stunning,” Gary Patterson, president of Shelby American, said in a statement. “From a styling perspective, there is simply nothing like it on the road. With the wide-body option, it’s a rare combination of sleek elegance and American muscle machismo. This is the automotive equivalent of a powerful heavyweight boxer fitted into a stylish, fine suit.”

Shelby American plans to build just 98 examples of the Super Snake Speedster in celebration of its founder’s 98th birthday. The high-performance drop-top, which is the company’s top-of-the-line Mustang-based model, starts at $133,785, though if you already have a 2018-or-later Mustang GT, you can get that upgraded for $79,995.