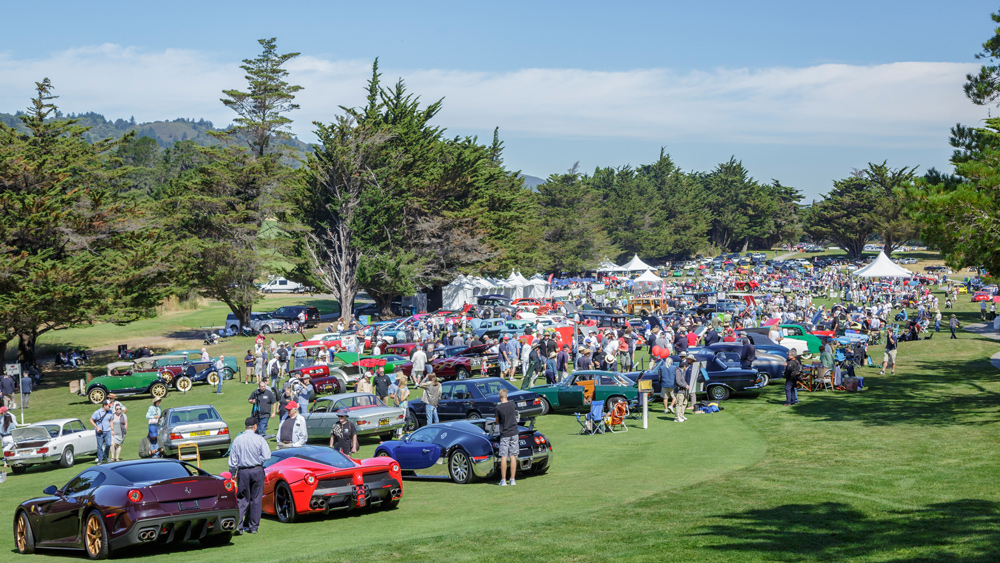 Photo by Kimball Studios, courtesy of the Hillsborough Concours d'Elegance.

As with most every public gathering scheduled for 2020, car shows around the world were shuttered due to the pandemic. Which means that the Hillsborough Concours d’Elegance, which had, until then, been held annually since 1956, will celebrate its 65th event on Sunday, July 18, at the Crystal Springs Golf Course in Burlingame, Calif., a stone’s throw from San Francisco International Airport.

The featured marques for 2021 are BMW and Ford, two unlikely bedfellows but both brands that distinguish themselves with a long history of exceptional designs. BMW’s sporting models span the decades, represented at Hillsborough with desirable examples like a 507 from 1957, a 1974 3.0 CSL and a 1980 M1. Ford cuts a wide swath, including a futuristic Ford Thunderbird concept car and perennial favorites like a 1968 Ford Shelby GT500 convertible.

This 1957 BMW 507 is heading for the concours lawn.  Photo by Oliver Sterk, courtesy of the Hillsborough Concours d'Elegance.

More than a dozen “Automobiles of Distinction” groups feature US prewar and postwar cars, approved examples from the Classic Car Club of America (CCCA), American muscle cars, American sporting cars through 1987, two Ferrari classes, two imported sports car classes, Rolls-Royce and Bentley classes, Japanese cars, and a preservation class. Additionally, vintage hot rods, race cars and even station wagons will populate the 18th fairway. And not to forget machines with fewer than four wheels, vintage motorcycles will also have their day in the sun.

The 1968 Ford Shelby GT500 convertible that will be among the field of contestants.  Photo: Courtesy of the Hillsborough Concours d'Elegance.

Collector-car enthusiast Glen Egan is the new event chairman, and the 10-year restoration of his beloved 1987 Fiat X1/9 is an indication of his commitment to the hobby. A kart racer and sponsor of the go-kart championships at Sonoma Raceway over the last decade, Egan has managed logistics for the Hillsborough Concours since 2015.

Sunday’s competition will conclude a weekend of festivities that begin on Friday, July 16, with a kick-off party featuring 40 vintage and classic cars on display in historic Burlingame. On Saturday, the annual Hillsborough Tour d’Elegance road rally travels scenic Bay Area back roads while led by a police escort, stopping for lunch at a private estate.

Partnering with the town of Hillsborough, the concours raises proceeds for Ability Path, The Guardsmen and the Hillsborough Schools Foundation. For tickets, visit HillsboroughConcours.com.