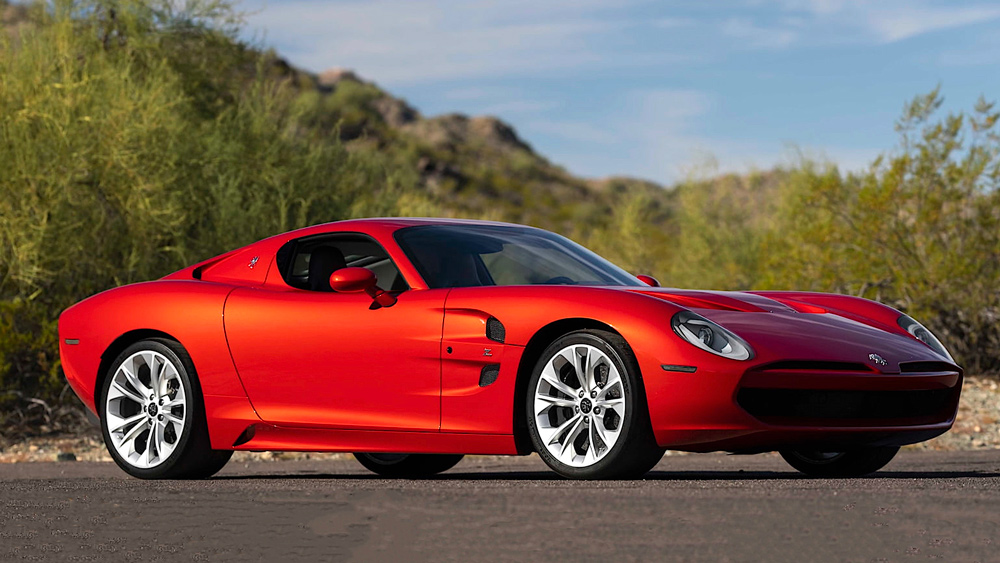 Two years ago, fabled Italian coachbuilder Zagato reignited the once-renowned Iso brand with the introduction of its Corvette Z06-powered, carbon-fiber-bodied Iso Rivolta GT Zagato. Just 19 examples were offered, and all were immediately snapped up by passionate collectors.

One of those buyers was Mike Odierna from Arizona. Already the owner of a super-rare 2013 Aston Martin V12 Zagato, Odierna signed the contract to get the first of Zagato’s latest model at the time. After a two-year wait, this oh-so-elegant two-door coupe, with its flowing lines inspired by the thundering Iso Grifo A3/C from the 1960s, was delivered just in time for Monterey Car Week. Displayed this year at the Quail Motorsports Gathering in Carmel Valley, Calif., it came away with a class win.

The first and only Iso Rivolta GT Zagato to be imported and registered in the US, the car has only 169 miles on the odometer and, surprisingly, is already set to cross the auction block at the annual Mecum collector-car sale in Kissimmee, Fla., on January 15.

“I always intended to keep it, and drive it, but as with so many things in life, situations change,” Odierna tells Robb Report. He explains that his Japanese wife has long yearned to return to her homeland, so they’ve decided to pick up and move east. “I thought about shipping it to Japan, but it just doesn’t make sense. I know I wouldn’t drive it there. So I felt it best to let it go,” he adds.

The example on offer took a class win at the Quail’s “Motorsports Gathering” this year.  Photo: Courtesy of Mecum Auctions.

Repeating the formula used with the original Sixties-era Grifo, where Italian style met American Chevy V-8 muscle, the Iso Rivolta GT Zagato uses the running gear of the last-generation Corvette Z06, a model also known as the C7. During the two years and more than 2,500 hours it took to build Odierna’s car at Zagato’s workshop in Milan, an all-new lightweight carbon-fiber body was mounted on the Z06 chassis. No body panels are carried over from the Corvette, and all the windows, lights, wheels and door handles are custom-made.

What carries over in all its glory, though, is the Z06’s 6.2-liter supercharged LT4 V-8, a power plant that cranks out an impressive 660 hp. And with that engine propelling a car that tips the scales at just 2,645 pounds, the performance is truly impressive; Zagato claims zero-to-60 mph sprinting in under 3.5 seconds and a top speed of 195 mph.

Inside, the GT Zagato retains the Z06 seat frames and dashboard, but wraps everything in hand-stitched Italian leather—even the inside of the roof—and reminds owners of the Zagato heritage with a multitude of badges, logos and “Z” embroidery.

Odierna ordered his car in a stunning shade of metallic red that was inspired by the red racing Grifos that won their class at the 24 Hours of Le Mans in both 1964 and ’65. For the interior, he chose charcoal leather with red contrast stitching.

The interior is wrapped in hand-stitched Italian leather and festooned with numerous badging and exclusive embroidery.  Photo: Courtesy of Mecum Auctions.

“The build quality of the car is just astonishing,” says Odierna. “The gaps between the carbon-fiber panels are wafer-thin, the fit and finish of the cabin is just the best. And with the main mechanical parts being from GM, you can probably get most replacement bits from NAPA Auto Parts.”

Overcoming complex type-approval regulations meant that Odierna first had to buy a brand-new Corvette Z06 Coupe from a Stateside Chevy dealer, register it and ship it across to Milan as a used car. Shipping it back to the US was also fraught with transport and customs headaches.

Also retained from the C7 Corvette are the seat frames and dashboard.  Photo: Courtesy of Mecum Auctions.

“The original plan was for the car to have made its US debut on the concept car lawn at Pebble Beach in August last year. Of course, that didn’t happen,” notes Odierna. “Actually, the very first time I saw my car was when it was rolled out of a transporter in Monterey this August.”

Most of those 169 miles were added by Odierna while cruising around the Monterey Peninsula. “I’d waited two long years to drive my GT Zagato and it did not disappoint. It felt amazingly quick—it actually scared the heck out of me when I floored it,” he mentions. “And through the curves, it just was so agile and precise. Those big Brembo carbon-ceramic brakes stop it on a dime.”

More than 2,500 hours were required to build the vehicle at Zagato’s facility in Milan.  Photo: Courtesy of Mecum Auctions.

Odierna has no idea what his car will sell for at the Mecum auction in January, and he politely declines to reveal what he paid for it. And though it just might get close to seven figures, it won’t go for the $2.04 million that the famous 1965 Iso Grifo A3/C, formerly owned by French rock star Johnny Hallyday, achieved last week at the RM Sotheby’s sale in the South of France. But according to Odierna, that’s perfectly fine. “I’m just happy to have had this very special car for the last few months, being able to open the door to my garage and see it there,” he says. “It’s such a piece of art.”