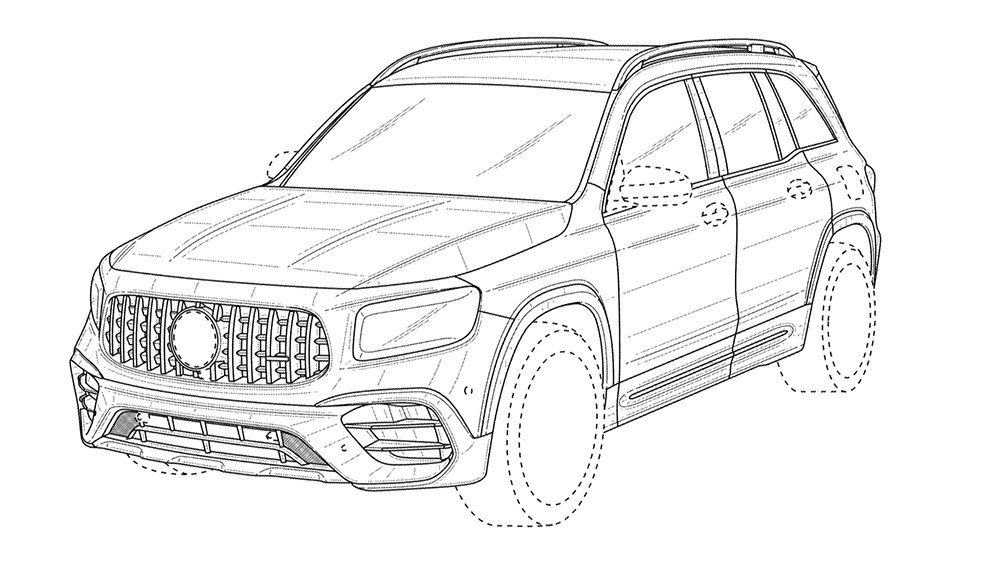 Auto enthusiasts have been patiently twiddling their gearsticks waiting for the latest member of the Mercedes-AMG GLB family to arrive. Now, we finally have a chance to meet the powerful crossover. Well, in picture form, at least.

The sketches of the likely GLB 45 come courtesy of a patent application that the marque recently filed with the United States Patent and Trademark Office. While the images could be of the brute’s less-powerful younger sister, the GLB 35, which was revealed back in August 2019, there a few tell-tale signs that lead us to believe it’s indeed the 45.

First, the sporty ride has quad exhaust pipes fitted to the rear bumper, whereas the GLB 35 has just two. Having more pipes will help increase the flow of the engine and give the SUV even more grunt. Furthermore, the front bumper and air intakes have been tweaked and look slightly more stylized than the 35. But, overall, the modifications are rather minimal, and so there’s a real family resemblance between the two crossovers.

Under the hood, it’s a different story. The range-topping 45 has a menacing engine config and well surpasses its younger sister in terms of power. It’s is fitted with a hand-assembled turbocharged 2.0-liter inline-four which is capable of churning out 382 hp and 354 ft lbs of torque. The 35, meanwhile, delivers 302 horses and 295 ft lbs of torque. This means the 45 ought to shave more than 0.5 seconds off the 35’s zero to 60 speed run, which it achieved in 5.1 seconds.

It’s likely that the all-wheel-drive crossover will feature torque-vectoring at the rear axle, so it can make mincemeat of winding roads and sharp corners, as well as an eight-speed, dual-clutch automatic transmission to effectively disperse all that power.