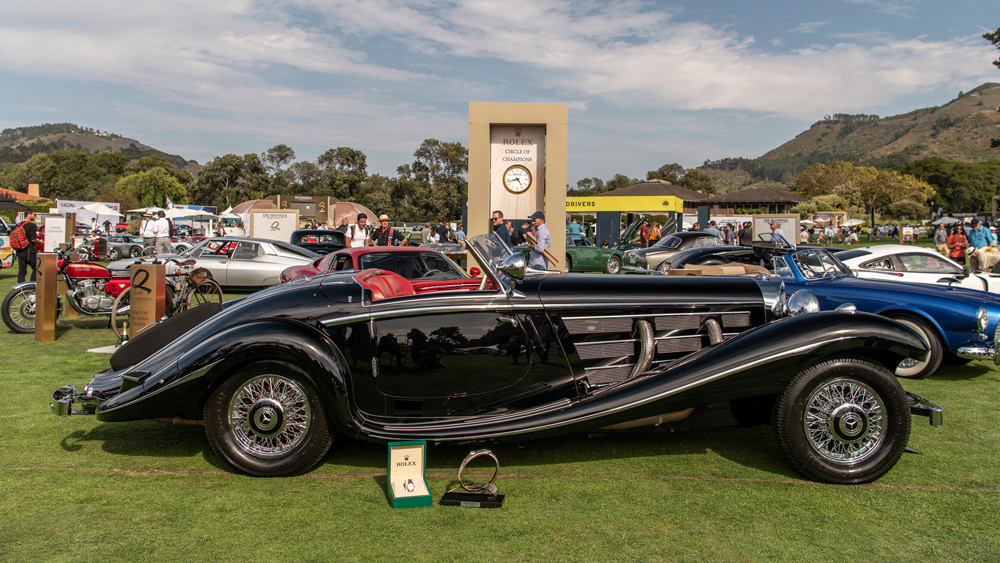 Family reunions are a time to reconnect, reflect and further strengthen bonds that even distance and time apart can’t come close to compromising. For the automotive industry, such a homecoming took place yesterday at the 18th running of the Quail, A Motorsports Gathering—an exhibition and concours put on by the Signature Events division of Peninsula Hotels and hosted at the Quail Lodge & Golf Club in Carmel Valley, Calif. And as last year’s edition was scrapped due to the pandemic, the opportunity to reunite was embraced as a morale-boosting panacea for the world’s leading marques, collectors and avid enthusiasts alike.

The concours and exhibition is hosted by the Quail Lodge & Golf Club.  Photo by Tom O'Neal, courtesy of Rolex.

“We’re a celebration of everything with an engine. This is about great friendships, great cars,” stated Philip Kadoorie, non-executive director of the Hongkong and Shanghai Hotels, Limited and son of the event’s founder Sir Michael Kadoorie, during the opening remarks. He went on to remind attendees that this was a time to “remember what we missed last year and celebrate everything this year.” And while the number of tickets available was reportedly reduced to diminish crowd size, the level of enthusiasm felt as big as ever.

Much more than simply a head-to-head competition between classic automobiles, the Quail is a preferred venue for prominent automakers when it comes to model reveals. This year, these included the global unveiling of the new Lamborghini Countach LPI 800-4, a North American debut of the Bugatti Bolide and the first time the general public could view the Audi Skysphere concept in person. Other heavy-hitters included Bentley, Koenigsegg, Pagani, SSC North America, and Hennessey, to name just a fraction on hand.

Responsible for some of the biggest buzz of the day, though, was automotive wunderkind Mate Rimac showcasing his 1,914 hp Rimac Nevera. Almost as compelling as the car is the recent news of his eponymous company’s increased role with Porsche and partial ownership in Bugatti.

“Taking my CEO hat off, I’m just a car guy going around here soaking it up, it’s amazing,” Rimac told Robb Report. Referencing his decision to bring the Nevera, he adds; “The ratio of people here that can actually afford this kind of car is huge—nowhere in the world is like this.”

A production prototype of the Bugatti Bolide.  Photo by Drew Phillips, courtesy of Rolex.

Interestingly, across the fairway from the Rimac display was the Bugatti stage drawing equal attention for the same reason. “This is a very special moment, as we are now announcing that the [Bugatti] Bolide is going into production” mentioned Cedric Davey, COO of Bugatti of the Americas. “The Quail is the perfect format with the right audience.”

The same assessment of the Quail’s value is echoed by many of the key players in attendance, including fellow hypercar developer John Hennessey, who commented; “We’re just very thankful to be here. I think this is ground zero, the most focused concentration of car people during [Monterey] Car Week, and to be able to share the [Hennessey] Venom F5—in Speed Devil Blue and Mojave Gold—at the Quail is very, very special.”

This isn’t to say that the actual concours element takes a backseat. Over 200 impeccable automobiles graced the golf links, divided into 11 classes for judging. In addition, a convoy of classic Trans Ams paraded in at midday from nearby Weathertech Raceway Laguna Seca while taking a break from track action.

Out of the highly competitive field, a 1938 Mercedes-Benz 540K Special Roadster was named the Rolex Circle of Champions Best of Show. The winning example, which has belonged to K. Heinz Keller for more than three decades, benefitted from a ground-up restoration that spanned eight years.

Anyone worried about the next generation’s involvement in car culture can take heart in knowing that a fair number of youth were present, including 10-year-old Nicolas Kolarow, camera draped around his neck while engaged in conversation with Bugatti’s deputy design director Frank Heyl. When later asked if he thought his peers were, in general, disinterested in automobiles, Kolarow was adamant: “No, I really don’t think so. I have a huge interest in cars and there are a lot of younger people who have an interest.”

That youthful exuberance still came across loud and clear when automotive celebrity Ant Anstead discussed his partnering with past Formula 1 champion Jenson Button to revive bygone coachbuilder Radford. Standing in front of the new Lotus Type 62-2 coachbuilt by Radford, Anstead was frank in articulating what the day at Quail meant to him.

“I kind of had one of those boyhood-dream moments when we were setting up, because this was just a concept, an idea that was shared on a whiteboard with a group of people that had this crazy ambition to build a supercar,” Anstead explained. “I look back on the last 30 years of me in the industry, from a boy that built a go-kart to a guy here now on the lawn—it’s pretty much magic.”