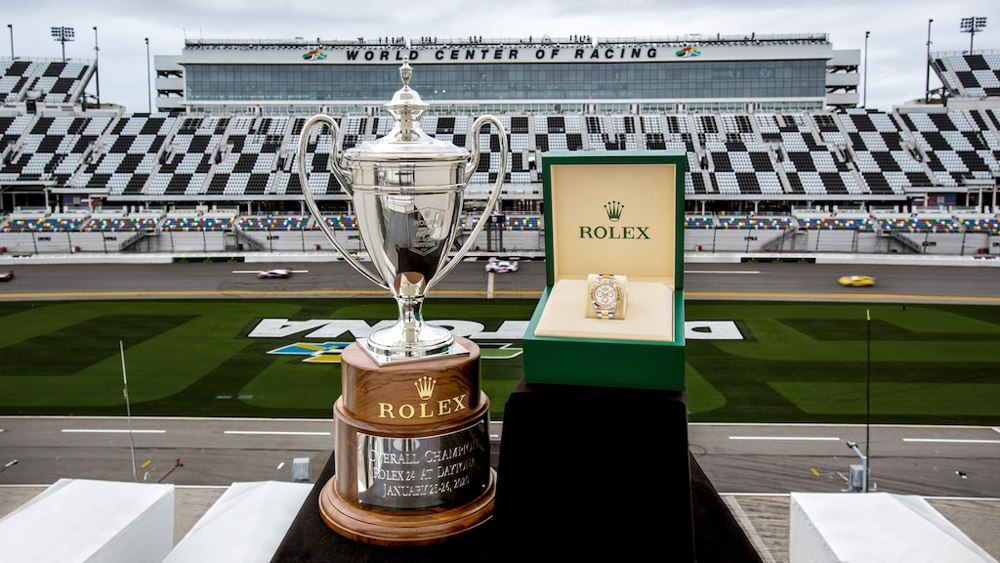 As the saying goes, “You never actually own a Rolex Daytona. Eventually your son or daughter simply inherits your place on a waiting list.” That said, there’s one surefire way of acquiring one of the most coveted, most collectible, most impossible-to-buy timepieces on the planet: Become a race-car driver and win the Rolex 24 at Daytona.

This weekend, 49 thundering projectiles will line up at Florida’s Daytona International Speedway for the 59th running of this annual Rolex-sponsored endurance event. When the checkered flag drops at 3.40 p.m. ET on Sunday afternoon, every driver on a class-winning team—this year there are five classes—will receive a white-dialed, steel-and-yellow-gold Rolex Oyster Perpetual Cosmograph Daytona timepiece.

Yes, it might be close to the same watch you could theoretically buy at your local Rolex-approved retailer, but what sets each of these watches apart is the engravings on the back: “Rolex 24 Daytona Winner 2021.”

“Rolex and Daytona are inextricably linked,” says five-time Daytona winner and proud owner of six Rolex Daytonas, Scott Pruett. “To be presented a watch engraved with the word “Winner” after 24 hours of intense racing is a moment that lives with you forever. Your Rolex is a constant reminder of the perseverance and hard work that goes into succeeding at the highest level.”

Scott Pruett on the podium after the 2013 Rolex 24 at Daytona.  Photo: Courtesy of Rolex SA.

“Flying Scotsman” Dario Franchitti, who won the 2008 race has stated: “For a driver to win the Rolex 24 At Daytona is an incredible achievement. But to receive a Rolex watch in Victory Lane is the ultimate reward.”

Rolex has deep-rooted connections with the world-famous Daytona race. The Swiss manufacture has been the event’s official timekeeper since 1962, introducing the Cosmograph Daytona watch the following year. And this year’s competition is a landmark as it marks Rolex’s 30th time as Title Sponsor.

Dario Franchitti in the Chip Ganassi Team’s garage prior to the 2018 Rolex 24 at Daytona.  Photo: Courtesy of Rolex SA.

The best-known Rolex Daytona wearer is, arguably, the late actor and racer Paul Newman. His Daytona—a gift from his wife Joanne Woodward in 1968 and engraved “Drive Carefully Me”—was sold at auction in 2017 for a record $17.75 million.

Newman won the Rolex 24 GT Class in 1995 at age 70, co-driving a Roush Mustang with NASCAR legend Mark Martin. So, who will be on the receiving end of the famous green box and its coveted Rolex timepiece this Sunday? As always, the competition will be relentless.

The Wheelen Engineering Racing Cadillac DPi during a qualifying run for this year’s contest.  Photo by John Raoux/AP Photo.

The overall winner will most likely come from the seven-car DPi prototype class—the No. 31 Whelen Engineering Cadillac starts the race on pole position. For the best wheel-to-wheel action, look to the GTLM class with Corvette, BMW, Ferrari and Porsche battling it out. As for the likely goal of each and every driver? As Pruett says: “It’s all about the watch.”

This year’s Rolex 24 at Daytona starts Saturday at 3:40 p.m. ET. Television coverage will be split between NBC and NBCSN.