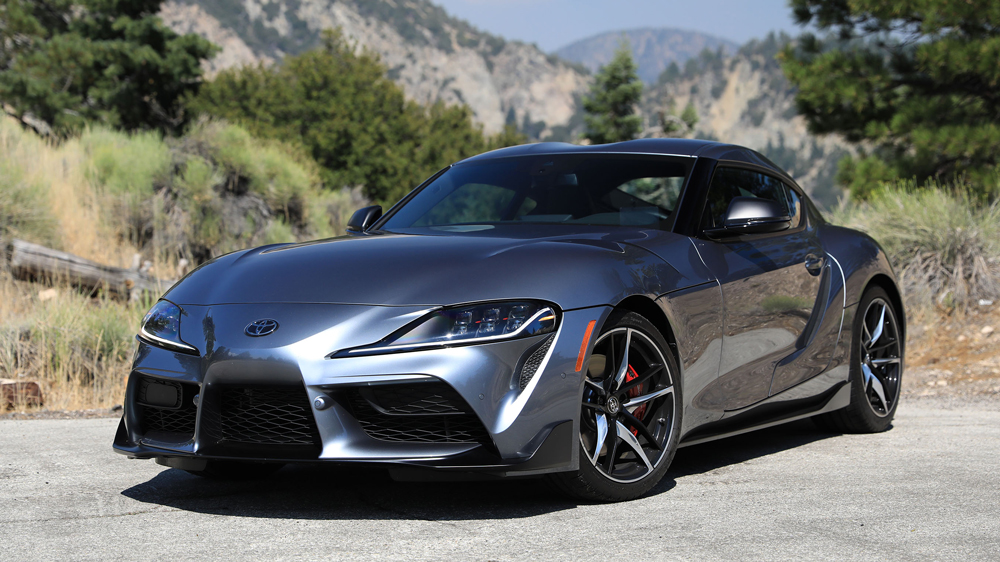 By now the dust has settled: Diehards have come to terms with the fact that the Toyota GR Supra is built in Magna Steyr’s Austrian assembly plant alongside the BMW Z4, with which it shares a common platform, power train, and interior elements. The curvaceous bodywork, once polarizing, has become familiar. And if there was ever any trepidation about the Supra’s capability, it seems to have done little to dissuade enthusiasts and tuners alike, who have embraced the Japanese marque’s latest sports car with open arms.

Given that, an automaker could rightfully justify leaving well-enough alone for a bit, but Toyota has laid out an ambitious development roadmap for the Supra that leaves little time on the table. So, just a year after its introduction, the GR Supra 3.0 has already gone under the knife, scoring a notable bump in horsepower and a handful of chassis tweaks in an effort to keep that momentum going. While that might irk some early adopters, it’s a pattern we expect to see repeated as this two-seat coupe continues to mature.

Previously, some performance aficionados took issue with the fact that, although the Supra and Z4 both debuted with BMW’s turbocharged B58 inline six-cylinder power plant, the Supra was forced to “make do” with 335 hp and 365 ft lbs of torque, while the most potent version of the engine was saved for the Z4 M40i.

That’s been rectified for 2021, with the Supra now matching the Z4’s output at 382 hp and 368 ft lbs of torque. And Supra’s 3.0-liter engine is now outfitted with a new cylinder head and exhaust manifold design, along with a new set of pistons.

Peak horsepower is now achieved at 5,800 rpm—up 800 revs from the outgoing engine—which is carried to 6,500 rpm on the way to the Supra’s 7,000 rpm redline. The sprint to 60 mph from rest now takes a scant 3.9 seconds, an improvement of .2 seconds over last year’s model, while the top speed remains electronically limited at 155 mph.

For 2021, the Supra’s turbocharged BMW B58 inline six-cylinder engine produces 382 hp and 368 ft lbs of torque.  Photo by Bradley Iger.

More power is certainly a good thing, but sports-car performance is all about balance, so Toyota sought to ensure that the chassis could keep pace with the newfound grunt. New front and rear bump stops, revised damper tuning and additional structural rigidity are all part of this year’s remix (the latter provided by aluminum braces that tie the strut towers to the radiator support), along with revamped software for the electronically assisted power steering, stability control and active rear differential.

Behind the wheel, it’s the changes to the engine which are most immediately evident. Toyota notes that the revisions were designed to make the Supra’s power plant more eager in the upper rev ranges, an area where turbocharged mills often struggle. The plan seems to have worked. On the twisting tarmac of the Angeles National Forest, just a few miles northeast of downtown Los Angeles, the updated power plant never felt short of breath as we wound through the gears of the eight-speed automatic by way of the steering wheel–mounted paddles. Even when called upon at lower rpm, power delivery is admirably linear.

The car sounds pretty good, too, and that made us long for an exhaust-mode toggle switch. It’s currently tied to the Sport button, which changes damper stiffness, throttle sensitivity, transmission behavior and other parameters; but sometimes you just want to hear the engine sing without all the other drama—or the need to totally reprogram Sport mode’s various settings just to get louder exhaust.

The sprint to 60 mph from rest now takes 3.9 seconds, while the top speed is still limited to 155 mph.  Photo by Bradley Iger.

While the GR Supra 3.0 is indeed more sure-footed than ever, information from the front end is still in fairly short supply, and the Michelin Pilot Super Sport rubber can struggle to keep the rear end in check if you aren’t patient with the throttle out of a slow corner. Neither characteristic really imparts the kind of confidence-inspiring feedback that naturally coaxes a driver closer to the dynamic limit in the way that, say, a Porsche Cayman or Chevrolet Corvette does, but there’s certainly some thrills to be had here for those brave enough to seek them out. And, crucially, Toyota has managed to improve the car’s handling composure without a significant sacrifice in everyday ride quality.

Room for improvement includes the less-than-seamless Apple CarPlay integration and an adaptive screen-brightness feature that can’t be disabled.  Photo by Bradley Iger.

There’s still a few rough edges left to be sorted out in the car’s second year of production as well, like the wonky Apple CarPlay integration and an adaptive screen brightness feature that can’t be disabled. However, on the whole, it’s clear that Toyota is moving in the right direction with the Supra’s rapid evolution. The automaker hasn’t been shy about its intention to ratchet up the excitement with each new iteration of the GR Supra, and we can’t wait to see what’s in store for next year.