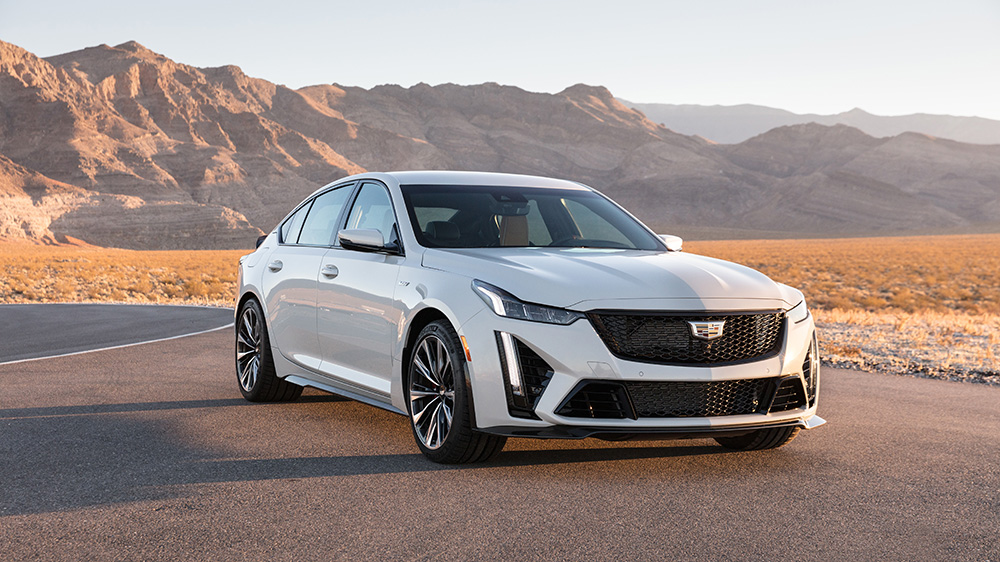 Some luxury car lovers may be sad that Cadillac is saying goodbye to its gas-powered V-Series cars, but the marque is at least making sure it goes out with a bang.

On Monday, the Detroit automaker unveiled the eagerly anticipated 2022 CT5-V Blackwing, one of the last cars in its lineup that will feature an internal combustion engine before it transitions to electric drivetrains. Outside of the car’s historical significance, it also happens to the most powerful Cadillac ever.

All that grunt comes courtesy of an upgraded version of the supercharged 6.2-liter V-8 that powered the CTS-V. That hand-built mill was already a brute, but after intake and exhaust modifications its output has been boosted by nearly 5 percent to a jaw-dropping 668 hp and 659 ft lbs of torque, according to a press release. Thanks to a high-output 1.7L four-lobe Eaton supercharger, you’ll be able to generate boost almost instantaneously, allowing the car to rocket from zero to 60 mph in just 3.7 seconds. The four-door can also achieve a top speed of over 200 mph.

Almost as exciting—at least for purists—is the news that the engine will come mated to a Tremac six-speed manual transmission. A 10-speed automatic transmission is also available as an option, and Cadillac says it will shift faster than other brand’s dual-clutch transmissions. Indeed, the CT5-V Blackwing will be marginally faster with the automatic, but we suspect that many won’t mind sacrificing a little performance for the pleasures of the gear box.

Inside the 2022 CT5-V Blackwing  Cadillac

The luxury marque claims that the CT5-Blackwing will be one of its most track-capable models yet, and the car includes plenty of cutting-edge mechanical features that support this claim. The rear-wheel-drive car comes standard with an electronic limited-slip differential and easily adjustable Magnetic Ride Control 4.0 suspension technology, both of which will help ensure the car handles perfectly whether you’re commuting to work or taking another lap around the local race circuit. It’s also been outfitted with the marque’s largest factory-installed brakes—available in gray, blue, red or bronze—and forged 19-inch wheels wrapped in specially designed Michelin Pilot Sport 4S tires.

The car’s general design language isn’t all that different from other sedans that Cadillac has sold in recent years, but the details tell a slightly different story. The exterior is almost devoid of chrome and showcases sharper lines and angles than the brand’s other four-door models. Add in some carbon-fiber aerodynamic elements and a blacked-out grille, and you’re left with what might be the sportiest Cadillac yet. The interior isn’t markedly different from the automaker’s other sedans, either, although it does offer carbon-fiber accents, a 3-D-printed shifter and a 12.0-inch digital instrument cluster similar to the one in the C8 Corvette.

It’s hard not to be impressed by all that, but if you’d like a slightly toned down or smaller version of Cadillac’s super sedan, there’s also the new CT4-V Blackwing. The CT5-V’s little sibling is closer to a subcompact than a full-sized car and features a smaller (but still very powerful) twin-turbo V-6 that can produce 472 horses and 445 ft lbs of torque. It also comes equipped with a Tremac six-speed manual transmission and can accelerate from zero to 60 mph in 3.8 seconds and has a top speed of 189 mph.

The marque has said the CT5-V Blackwing represent the “pinnacle of Cadillac performance” and because of that it’ll cost a fair bit more than its other four-door models. The super sedan will start at $84,990 when it goes on sale later this summer, which is about $35,000 more than the base model CT5-V. Meanwhile, the CT4-V Blackwing will start at $59,990. Reservations for both high-performance sedans can be placed now through the Cadillac website.