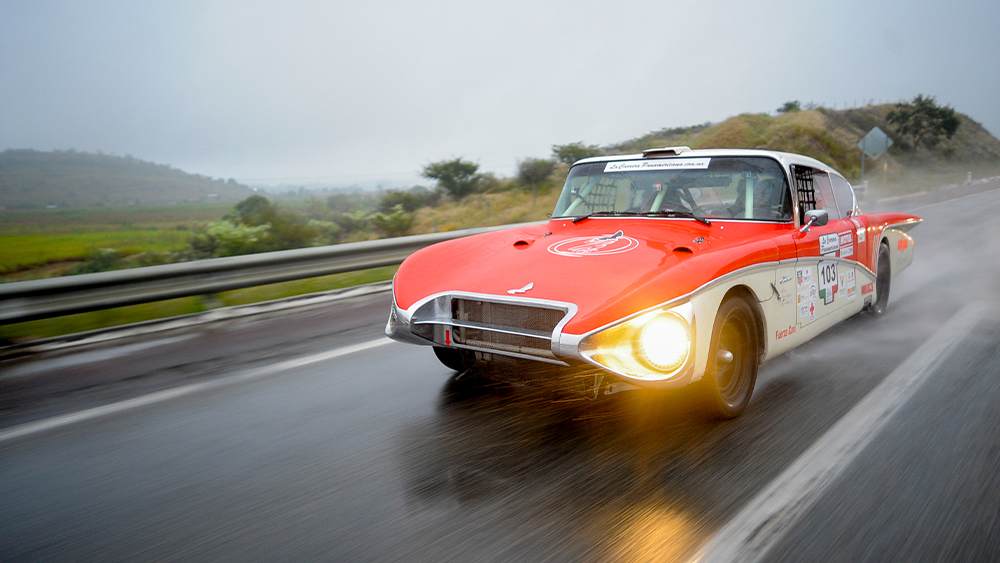 “Motor racing is a disease of the brain,” a driver suggests in 1992’s La Carrera Panamericana, a Pink Floyd-scored film that documents the irresistibility of adventure-hungry racers drawn to wide open roads with no limits. Whether you consider motorsports an affliction, a necessity, or both, today’s Carrera Panamericana presents one of the few remaining opportunities to enjoy classic cars at full tilt.

The storied Mexican road rally originally ran between 1950 and 1954. It was eventually shut down following the inevitable human and mechanical wreckage that ensues when rules were mere suggestions and anything could happen. Also fueling the drive to extinguish its first hurrah was the 1955 Le Mans disaster, which cast a pall on virtually all official motorsports events.

This year’s Carrera marks the 35th anniversary of the contemporary iteration of the event, and a few things have evolved since those heady early days. For starters, it’s no longer a flat-out race to the finish, but rather 2,200 miles of driving over seven days. Of that, 20 percent is reserved for no-holds-barred top speed runs on sections closed off by highway patrol.

This time around the course runs from Veracruz on the Gulf of Mexico to the city of Durango in the northern part of the country. “Because the roads are more crowded now with a lot of construction, we have speed features where there are few cities with people,” explains Karen León, La Carrera’s global director. She says the event’s top priority is safety, with tech inspections ensuring roll cages and helmets are present in all competing cars, and law enforcement maintaining road closures during high-speed sections. León also adds that the official top speed record of 192 mph was recorded by a 1950s Oldsmobile in the northeastern state of Monterrey.

The 2022 edition is slated to kick off on October 14, and features entrants ranging from a 1967 Aston Martin DB6 to a 1977 Porsche 911 RSR to a 1953 Studebaker Champion. Some US participants will be coming into Mexico as part of a convoy starting in Laredo, Texas, while most Europeans will be shipping their vehicles by boat. The 35th anniversary of the event also features a new Sport and Classic Tour class—primarily Porsches and Ford Mustangs—in which modern cars can enjoy the road rally experience without officially competing alongside vintage metal.

If a bit of Mexican mayhem holds appeal, you can head to La Carrera Panamericana and register for the rally.