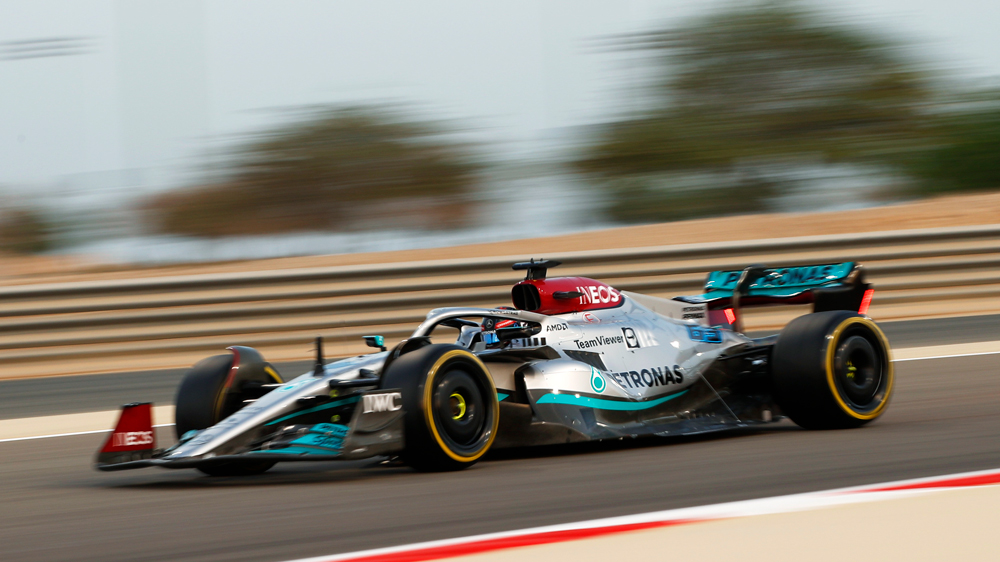 After only six days of preseason testing, Formula 1 auto racing this year has come to be defined by these three words: “Porpoising,” “ground effect” and “turbulence.” But the one word that best encompasses the expectations for the 2022 season, which starts at the Bahrain Grand Prix this weekend, is “Uncertainty.”

December saw the close of 2021 competition with one of the most emotional championship finales in the series’ history. With that dramatic conclusion still fresh in the minds of both fans and participants, the pinnacle of single-seat, open-wheel racing promises another unpredictable and wild 22-race season.

Of course, there’s the prospect of a tense rematch between last year’s protagonists, Lewis Hamilton and Max Verstappen, racers whose title was decided on the last lap of the last race. But anticipation is also high over the biggest technical regulation changes in decades, ones designed mainly to lower costs and spice up the show. After the testing in Bahrain, however, it seems that the regulations have only added further questions about what to expect.

Lewis Hamilton leads the field at the start of the 2021 Abu Dhabi Grand Prix.  Photo by AP Photo/Hassan Ammar.

What is clear is that, for the first time in ages, the new cars look radically different to the previous ones: They’re heavier, with larger wheels and tires, longer noses, and above all, far fewer elaborate aerodynamic appendages. In short, they’re simpler and more streamlined.

While the 1970s and ’80s were marked by crazy innovations like six-wheeled cars, fan cars and teapot cars, those days are long gone due to increasingly stringent rules. Despite that, teams have devised a relatively large spectrum of different interpretations this season. Overall, however, the new approach in aerodynamics has made the cars resemble their ancestors from the early 1990s. The new Ferrari F1-75, with its Coke-bottle-shaped side pods, calls to mind the F1-90 (also known as the 641) of 1990, which is on display in the Museum of Modern Art in New York. In other words, the machines are more beautiful than ever.

But if the complexity of their wings and other appendages have been subdued, the emphasis on aerodynamics itself has not. This year marks a big return to the “ground effect,” where the cars gain more grip through the underfloor design—with tunnels using a Venturi effect to suck the car to the track—and rear diffuser, while drawing less from the wings.  Ground effects were particularly exploited in the late 1970s, until they were outlawed as too dangerous in 1983. The idea now is for the cars to be less affected by the turbulent air created by the wings of the car ahead, in order to facilitate overtaking and improve the overall spectacle.

Members of the Mercedes-AMG Petronas team during preseason testing in Bahrain prior to the start of the 2022 Formula 1 season.  Photo by Sebastian Kawka, courtesy of Mercedes-Benz Grand Prix Ltd.

Yet during preseason testing, drivers found that, while it was easier to get closer to another car, there is now a moment of extreme loss of grip when they are just about in a position to pass. That loss of grip then returns as they get slightly closer, making the maneuver potentially more dangerous. The cars are also much more difficult to control through the slow-speed corners than in the past.

Another new problem linked to the ground effect is defined by what’s referred to as “porpoising.” The term was coined by Mario Andretti during the previous period of ground-effects cars, when he was testing his Lotus at the Silverstone track in England. While on the high-speed straights, when the cars get very close to the track, they suddenly lose grip, then regain it, then lose it, which leads to bouncing up and down. This costs in both speed and wear on the driver. It has been widely reported that Ferrari racer Charles Leclerc recently stated, “It feels like turbulence on an airplane, going up and down the whole straight,” adding that it made him feel a bit ill.

Another change is that the tire size has grown from 13 inches to 18 inches this year, also to reduce the “dirty air” of the car in front. But some drivers complain of less traction and potential problems of durability. Whatever happens on the technical side, the soap opera among drivers is certain to provide surprises, and possibly even a paradigm shift.

After nearly a decade of domination by the Mercedes team and its star driver Hamilton, expectations are high for a generational change that was already foreshadowed by Verstappen finishing in first last season. That win deprived Hamilton of a recording-breaking eighth title in a highly controversial manner. The race director appeared to fumble over the rules in the final moments of the contest during a safety-car period, which appeared to hand the 24-year-old Dutchman victory on a silver platter, while snatching it from Hamilton.

The British driver is now 37 years old, and he said that the new Mercedes car is not ready to win races. Additionally, he has a new young teammate, 24-year-old George Russell, who is keen to prove himself after arriving from the weaker Williams team.

Moreover, the Red Bull car of Verstappen and Sergio Perez finished testing in the same place it ended last season: at the top of the time sheets. And for the first time in two years, the Ferrari of Leclerc and Carlos Sainz Jr appears to be ready to win again. McLaren also looks to be continuing its renaissance, building on the strength of last year when Daniel Ricciardo, 32, took a surprise victory at the Italian Grand Prix in Monza. And McLaren driver Lando Norris, 22, is another member of the next wave in talent.

There have been very few major changes at the teams, except for US-owned Haas, which dropped both its Russian sponsor, Uralkali, and its Russian driver, Nikita Mazepin, due to the war. To replace Mazepin, Haas rehired Kevin Magnussen of Denmark, who drove for the team from 2017 to 2020. Then there is Valtteri Bottas, who will race for Alfa Romeo after driving alongside Hamilton at Mercedes for the last five years. He is joined by rookie Guanyu Zhou, 22, of China. Alexander Albon, 25, returns from a year away—after leaving Red Bull—to replace Russell at Williams.

The 2022 season was originally set to run 23 races, which would have made it the longest to date, but the war in Ukraine provoked the cancelling of the race in Sochi, Russia, set for September. In May, Florida’s cultural epicenter, Miami, will host its first race, while the US Grand Prix will return to Austin, Tex., in October. This is the first time since 1984 that the US will stage more than one race. And races in Australia, Canada, Japan and Singapore, which were cancelled for two years due the Covid pandemic, are all back on track.

An AlphaTauri race car gets put through its paces during practice for the 2021 Formula Aramco United States Grand Prix in Austin, Tex.  Photo by Dave Clements/Sipa USA/AP Images.

The shadow of the pandemic remains, however, as Ricciardo tested positive for the virus just last week, barely escaping elimination from this first race in Bahrain; while on Thursday, Aston Martin’s Sebastian Vettel tested positive, and will be replaced this weekend by Nico Hülkenberg.

Among the tweaks to the sporting regulations, the race direction takes center stage. Michael Masi, the race director who made the controversial call in Abu Dhabi in December, has been replaced by two race directors, Niels Wittich and Eduardo Freitas, who will alternate in the job. In addition, an old hand at the sport, Herbie Blash, has returned from retirement to act as an advisor. Finally, the rule that decided the title in that last race has now been clarified, and done so in a way that would have ensured that Hamilton, not Verstappen, won the title last year. How it all unfolds this season is anyone’s guess. One thing you can be certain of, though, is that after the curtain rises again on Motorsport’s largest stage, Formula 1 will put on quite a show.

Editor’s note: Writer Brad Spurgeon spent more than two decades covering Formula 1 for the International Herald Tribune and The New York Times, and is also the author of Formula 1: The Impossible Collection, from Assouline.