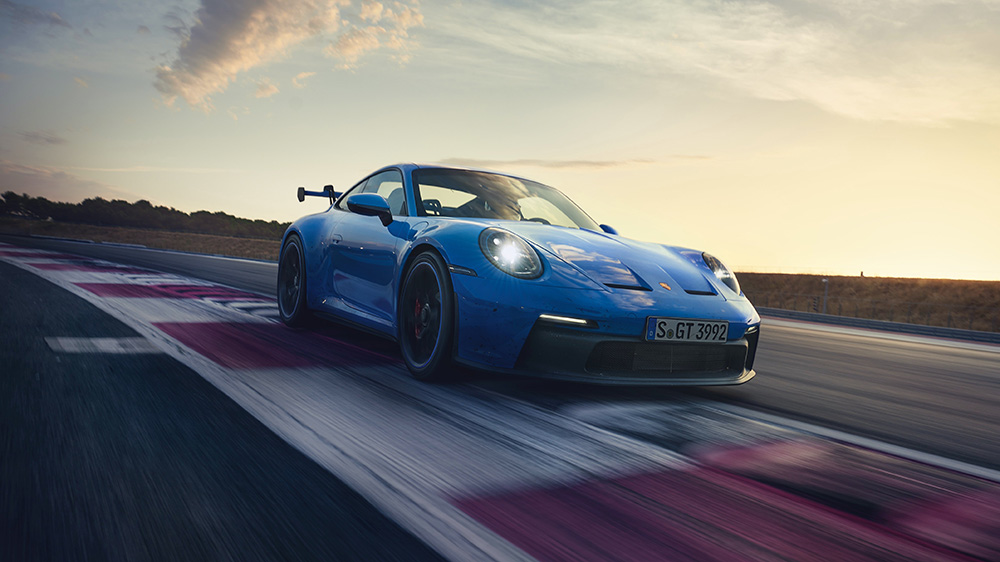 If there are Porsche loyalists still unconvinced by the 992-generation 911, the brand-new GT3 is here to convert them.

The German automaker has just unveiled the fourth iteration of the track-ready (but still street-legal) variant of its iconic sports car, and it’s hard to imagine even the snobbiest purist having any complaints. That’s because the model offers better performance and handling than its predecessors and comes available as a stick shift.

Since it was first introduced in 1999, as part of the 996 generation, the GT3 has been Porsche’s most ambitious high-performance variant. That hasn’t changed with the newest edition. The car is powered by a naturally aspirated flat six engine. This particular 4.0-liter mill, which it shares with the GT3 Cup race car, is borrowed from the 991-generation 911 Speedster but has been equipped with new pistons and dry-sump lubrication system, according to the automaker. Because of the modifications, the engine can churn out a thrilling 502 horses and 346 ft lbs of twist and rev at a maximum of 9,000 rpm. It comes mated to a seven-speed PDK dual-clutch automatic transmission standard, but, in news sure to please the traditionalist out there, a six-speed manual will be available as an option.

Thanks to all this, the new GT3 (automatic transmission edition) can launch from zero to 60 mph in just 3.2 seconds and has a top speed of 197 mph. (Specs for the manual transmission version were not made available.) Maybe even more impressively, the car ran a 6:59.927 lap around the Nürburgring’s 12.94-mile circuit. That’s a full 17 seconds faster than the 991-generation GT3’s time around the same course, making the high-performance variant one of Porsche’s quickest models.

Porsche didn’t stop at the GT3’s powertrain. As reported in the fall, the variant is outfitted with a double-wishbone front suspension adapted from the 911 RSR and GT3 race cars. This is the first time the feature has been included on a street-legal version of the sports car and dramatically increases its steering precision. The car’s suspension, which doesn’t share a single component with that of the 911 Carrera, has a multi-link setup in the rear as well as more ball joints throughout. The car also features larger cast-iron disc brakes than its predecessor, though they actually weight less thanks to a narrower friction ring. Carbon-ceramic brakes are available as an option, too. Meanwhile, the car rides on staggered alloy wheels—20-inch rims in the front and 21-inch in the back—wrapped in ultra-high-performance summer tires.

Despite all these new features, the new GT3 weighs about the same as its predecessor thanks to ample use of carbon-fiber components throughout the vehicle. The body shell, which is based on the Carrera’s, features a carbon-fiber hood, rear wing and fixed rear spoiler. The GT3 also has a wider track and a more athletic look, thanks in no small part to an improved aerodynamic package that includes hood vents, adjustable splitters and diffusers behind each wheel and, of course, that giant rear wing. The swan-neck wing is also manually adjustable, providing up to 50 percent more downforce in the normal position and up to 150 percent more in the performance position (which, the brand stresses, is not meant for street driving).

The interior of the car isn’t all that different than other eight-generation 911s, but in this case that’s a good thing. It’s simple and elegant, with the company’s infotainment system located at the top of the center console. Other GT3-specific touches include an automatic gear selector that looks like a stick shift, a drive mode selector on the steering wheel and a “Track Screen” display mode that allows drivers to focus on only the essentials while out on the race circuit. Four-way sport seats come standard, but carbon-fiber full bucket seats are available as an option for those who want that classic look.

The new 911 GT3 will be part of Porsche upcoming 2022 model year class but is expected to arrive in dealerships before the year is out. The marque hasn’t hinted at how much the sports car will cost, but we expect it will be north of the last-generation’s $145,650 starting price, especially if you opt for the manual transmission, which will be available as part of the Touring package. Expect a firm on-sale date and pricing info in the not too distant future.