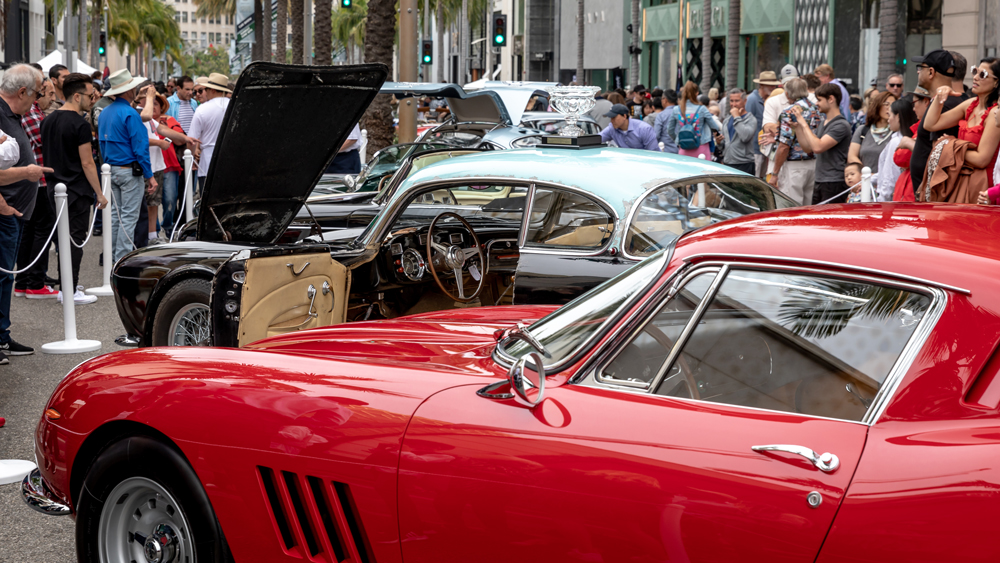 As the automobile industry continues to steer toward autonomous driving and electrification, social media and virtual reality are fabricating a false sense of community. This combination has many worried that true car culture will soon be something only anthropologists study a century or two from now. It’s a dystopian future that collector Bruce Meyer fights with every fiber of his being. His latest salvo against automotive apathy is the 27th annual Rodeo Drive Concours d’Elegance in Beverly Hills, Calif., which launches June 19 and is free to the public.

The image of a young child being introduced to the magic of the motor car is a slice of Americana right off a Norman Rockwell canvas. And on a day where much of the nation focuses on fathers, that scene will unfold myriad times over when the most exclusive street in one of the world’s most exclusive neighborhoods becomes an open-air showcase for the finest cars in the world.

The only day that shopping takes a back seat on Rodeo Drive.  Ted Seven, courtesy of the Rodeo Drive Concours d'Elegance.

“When we first started out nearly 30 years ago, most of the cars were from residents or friends of friends in Beverly Hills,” says Meyer, the only surviving co-founder out of the original four. “Now, it’s not just for the citizens of Beverly Hills but is a true family event that draws from all over Los Angeles. At the last one, we had over 40,000 people. I know ‘diversity’ has become a big buzzword, but we have diversity of ownership, diversity of years and diversity of makes. It’s amazing to see how this show has developed.”

As with most all social gatherings, the pandemic shuttered the concours in 2020, but was responsible for what may now be a new tradition. For 2021, rather than cancel everything again, the organizers shifted the format to a parade of show cars, the Rodeo Drive Tour d’Elegance. The response was so overwhelming that the tour is being included again this year. As for what the parade attendees can expect to see, Meyer says, “We will have amazing Rolls-Royces, supercars, hypercars, Pirelli is bringing a current Red Bull Formula 1 car and we will even have the Beverly Hillbillies truck.” And more exotic and rare vehicles will be on display during the show.

The lack of any admission price is not the only way this concours differs from most. “I’m not a big fan of judged shows,” Meyer says. “The nice thing about this show is that there is no judging, so participants come with no expectations. Nobody is there to win first prize, everyone is there just to share their cars and passion.”

This year, Rolls-Royce will be the featured marque with examples spanning much of its 116-year history, including a 1925 Rolls-Royce Phantom I Jonckheere Coupe and the latest iteration of the Ghost. Also on hand will be a few custom creations from John D’Agostino, as well as numerous hot rods and lowriders. When it comes to the qualification process, Meyer keeps it simple. “I just have to like them,” he says, referring to each car. “There’s no selection committee.”

A Rolls-Royce is hard to miss, even on Rodeo. The British marque is being featured this year.  Rodeo Drive Concours d'Elegance

Although the event comes at no charge to the public, generous sponsorship from the likes of Pirelli, Rolls-Royce, Ferrari of Beverly Hills, O’Gara Coach and the Rodeo Drive Committee helps generate funds to be donated to the Beverly Hills Police Officers Association and the Beverly Hills Firefighters’ Association. The latter is fitting considering the roots of the concours itself.

The restored Ahrens-Fox fire truck that started it all.  Daniel Nikkhoo, courtesy of the Rodeo Drive Concours d'Elegance.

“The city of Beverly Hills had an old Ahrens-Fox fire truck that was languishing unrestored,” says Meyer. “We decided to put on a car show to raise some money to restore it—that’s how it all started.” The fact that it has grown exponentially in both quality of cars and popularity is a powerful indicator of one point in particular. Car culture will continue to have plenty of kick, as long as there are enthusiasts like Meyer who keep a foot on the gas.