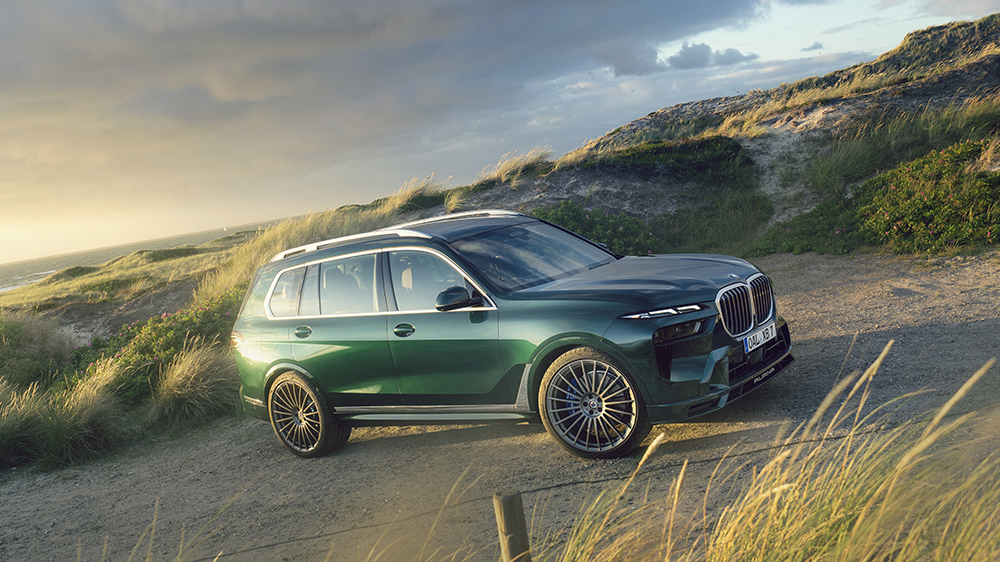 Alpina has gone and turned the range-topping BMW X7 into a super SUV.

The German tuner—which was officially acquired by BMW earlier this year—has just unveiled the 2023 XB7. Alpina has taken the recently refreshed SUV and tweaked its hardware and design to make it even more capable than we thought was possible.

As with most Alpina vehicles, the place to start with the new XB7 is under the hood. The shop has taken the 4.4-liter twin-turbo V-8 found in the new BMW X7 M60i and tuned it so that it now generates 630 horses and 590 ft lbs of twist, increases of 107 hp and 37 ft lbs of torque, respectively. The heavily modified mill is connected to an eight-speed automatic transmission that sends power to all four wheels, as well as a 48-volt starter-generator that helps improve response and efficiency. Alpina says its high-performance SUV will be able to hit 60 mph in 3.9 seconds and run the quarter-mile in 12.4 seconds, both of which are awfully quick for a vehicle that tips the scales at over 6,000 pounds. The top speed is 180 mph if you opt for the no-cost performance tire package.

Other mechanical upgrades include a two-axle air suspension with Alpina-specific dampers. Thanks to the new set-up, ride height can be increased by more than an inch-and-a-half at low speeds, and lowered when you’re driving in Sport or Sport+ mode. It comes equipped with reinforced torsion struts and electromechanical anti-roll bars to increase rigidity and stability. It also features rear-wheel steering and Brembo brake calipers finished in Alpina Blue with the company’s name across them in white.

Alpina didn’t stop there of course. The X7’s exterior has also been subtly tweaked, including a more angular front bumper and a body-color rear bumper. The vehicle rides on either a set of 23-inch, 20-spoke wheels or 21-inch Dynamic wheels. The former comes wrapped in a set of Pirelli summer tires developed specifically for the SUV. Inside the XB7’s luxurious cabin—which comes decorated in one of three trim options: Myrtle Luxury Wood, Piano Lacquer and Natural Walnut Anthracite—you’ll find an Alpina steering wheel, illuminated gear selector and glass infotainment dial, each of which is accented by the shop’s trademark blue. The seats and door panels are covered in leather, too.

If you found yourself wishing the X7 M60i offered better performance and more luxury, the XB7 could be just what you’re looking for. The high-performance SUV will cost $145,995. Alpina will open the order books later this month, with deliveries expected to begin early next year.