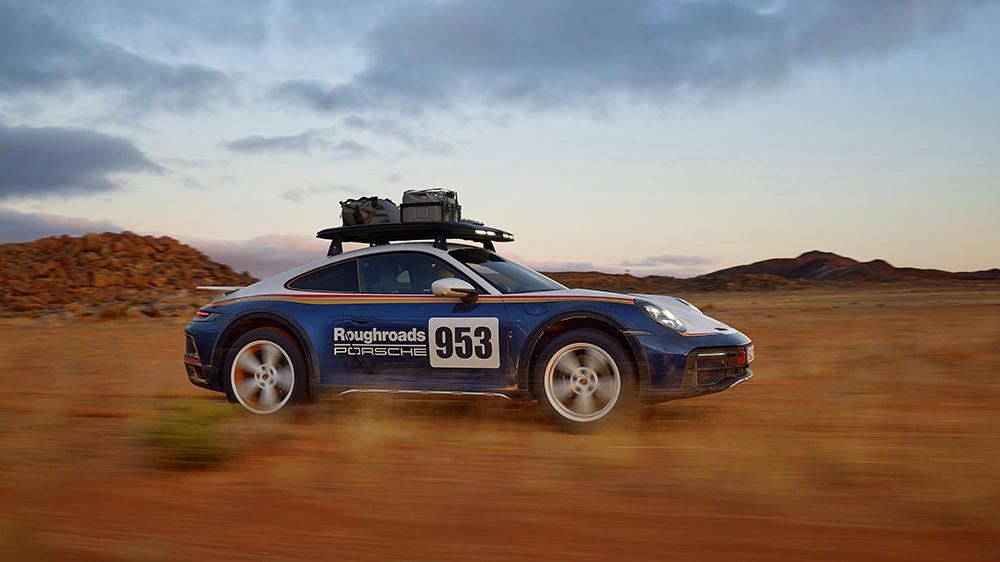 Here’s one Porsche 911 that’s more than up for a run through the mud.

Days after sharing preview images of the 911 Dakar undergoing extreme weather testing, the German luxury marque has finally unveiled the production version of its eagerly anticipated off-roader. The new variant may have all-wheel drive, but it’s still the sports car we all know and love.

Porsche has taken the necessary steps to make sure the 911 Dakar looks just like its classic sports car, only more rugged. That means its ride height has been boosted by two inches, and it’s been equipped with flared fenders, rocker panels, tow hooks and a fixed rear spoiler. It also rides on a set of staggered, custom-designed Pirelli Scorpion All Terrain Plus tires. If you really want it to look like a rally racer, you can opt for the optional roof tent and cargo basket. There’s also the Rallye Design Package if you want the car finished in a competition-style livery inspired by the paint job worn by the 911 that won the 1984 Paris-Dakar Rally.

The new variant is basically a rally version of the 911 Carrera 4 GTS. Because of this, you’ll find a twin-turbo flat-six sitting in the engine bay, which is mated to an eight-speed PDK gearbox that sends its 473 hp to all four wheels. Thanks to launch control, the car can rocket from zero-to-60 mph in just 3.2 seconds and has a top speed of 150 mph.

The 911 Dakar owes its boosted ride height to a recalibrated suspension. It includes a lift system that raises the vehicle an additional 1.2 inches. When in use, it lifts the car 3.2 inches higher than the standard 911, putting it into SUV territory. Speed is limited to 105 mph at full height, though.

Other off-road modifications include stainless-steel skid plates and side protectors, so you don’t have to worry about undercarriage damage. The car also comes with two new drive modes: Off-Road and Rallye. The first automatically raises the vehicle to its full height and is designed for particularly rough terrain, while the second biases the rear axle when you’re driving over loose and uneven surfaces.

You won’t have to wait long to get behind the wheel of the 911 Dakar. Porsche says the variant will arrive in the US next spring and start at $233,450. If you want to add the off-road-friendly sports car to your collection you’ll need to move quickly, though. The marque intends to only build 2,500 examples of the variant.