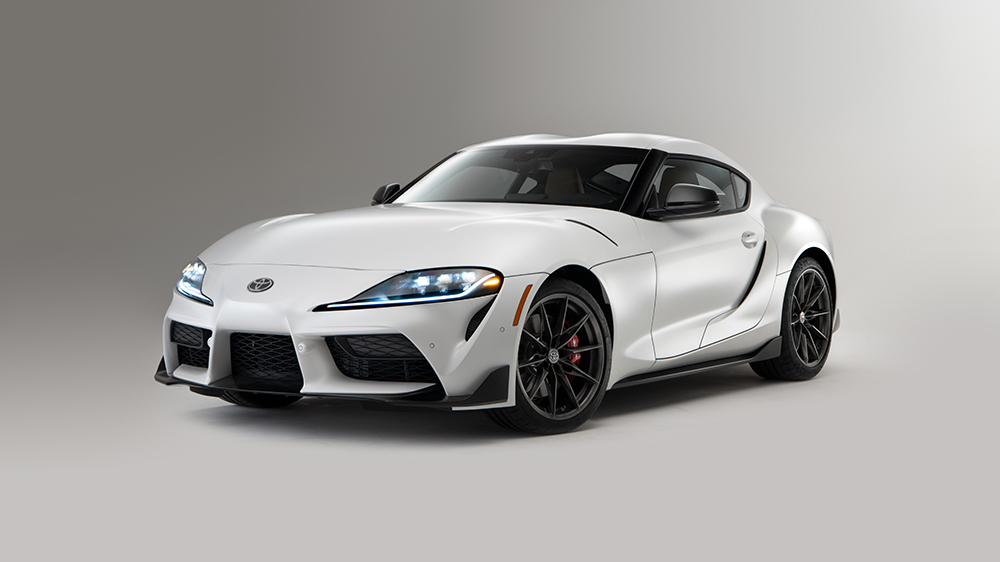 Toyota just gave enthusiasts another reason to love the Supra.

The Japanese auto giant has announced a six-speed manual gearbox will be available as an option on the 2023 edition of its iconic sports car. Now, if you opt for the more powerful version of the vehicle, the pleasure of shifting through the gears can be yours and yours alone.

The news, which performance diehards have been waiting for since Toyota brought back the nameplate in 2020, doesn’t come as a complete shock. Two weeks ago, the automaker finally confirmed that the Supra would be available with a stick shift again. Unfortunately, it won’t be available on all Supras, just those powered by the BMW-sourced turbocharged 3.0-liter inline-six. The mill produces the same power—382 hp and 368 ft-lbs of torque—regardless of which type of transmission it’s connected to, but the six-speed manual offers a shorter final drive ratio and rev-matching, which can be turned off.

The manual will be offered on three Supra models, the 3.0, 3.0 Premium and the limited-edition A91-MT. Only 500 examples of the last variant will be sold in the US and only as part of the 2023 model year. It comes in either matte white or gray and features an exclusive Cognac leather interior, a “GR” logo Alcantara shift knob, a 12-speaker JBL sound system (which also comes standard on the 3.0 Premium), 19-inch alloy wheels and special red brake calipers and “Supra” badging.

All 2023 Supras, regardless of transmission, come with a revised suspension and power steering system, as well as a new feature called “Hairpin+,” designed to make sharp turns a breeze if you ever find yourself in the midst of a car chase on a windy mountain road. Manual-specific changes include recalibration of the traction- and braking-control systems, as well as adjustments to the shape of the center console made so you don’t bang your hand against the control panel when you’re shifting between third and fourth gears.

It should be noted that the 2023 Supra isn’t the only car available with a manual gearbox. Porsche announced it comes as standard equipment on the new Porsche 911 Sport Classic on Wednesday. But the cars with stick shifts are definitely few and far between. Last year, The New York Times reported that just one percent of the cars produced for sale in the US had manual transmissions, compared to 35 percent in 1980. The decline makes sense when you consider that only 18 percent of US drivers say they can even drive a stick shift.

Despite this, Toyota is doing what it can to keep manuals alive. The new Supra is one of a trio of models the brand currently offers in the US with the feature, joining the sporty GR86 and the less fashionable Corolla (yes, the Corolla). Earlier this year, the company also patented a system for EVs that would simulate the feel of going through the gears with a fake pedal and shifter.

Toyota clearly isn’t ready to give up just yet.