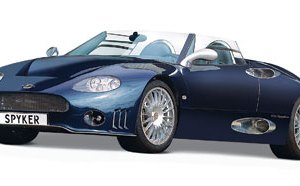 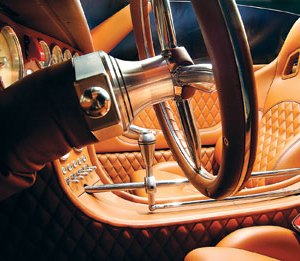 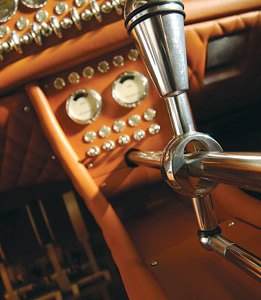 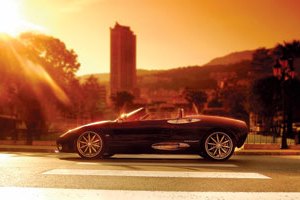 Exclusivity in the world of sports and luxury automobiles is relative. Porsches and Mercedes seem positively commonplace when compared to Ferraris and Bentleys, but even these rarely encountered series production cars are manufactured in the thousands annually. For those drivers seeking the rarest of aves, a Spyker C8 Spyder—built to order—is the ultimate in gratification. “One buys a Ferrari,” says Spyker CEO Victor Muller. “One has a Spyker built to one’s own specifications.”

You begin by falling in love with the styling of the Spyker, which appears—despite its genuine supercar credentials—utterly refined and sophisticated, devoid of vestigial fins, flares, and hung-on aerodynamic appliances that festoon other automobiles of its ilk. The curvaceous form is optically unbroken and coherent from nose to tail. Perfectly proportioned, the C8 is not too wide, but rather just right for enjoying on real-world roads.

The design philosophy behind the Spyker is summed up best by the motto coined in Latin by the creators of the original Spyker racecar in 1903: Nulla tenaci invia est via (For the tenacious, no road is impassable). The Dutch company enjoyed various successes in automobile and aircraft manufacture until its untimely demise in 1925. Enter entrepreneur Muller, an art and automobile collector of consummate good taste who, in 1997, obtained the Spyker name from the heirs and developed a promising prototype mid-engined roadster created by engineer Maarten de Bruijn. By 2002 the car was in production, and today the Spyker range includes 8- and 12-cylinder models, as well as competitive Le Mans endurance racers.

Power comes from another aluminum jewel, Audi’s 4.2-liter, naturally aspirated V-8. Good for 400 hp, the midship-mounted engine is mated to a manual 6-speed Getrag gearbox that drives the rear wheels. Throttle response and braking are in the league of the newest F- and L-cars, but the Spyker is so light, at less than 2,800 pounds, that its handling dynamics and seat-of-the-pants feel are more akin to cars in the Lotus and Noble class. Yet the incomparable flexibility of the imperturbable Audi mill allows a fifth-gear drive from near-idle to redline, a trait reminiscent of the early Lamborghini GTs and one that makes the racecar-responsive Spyker a pussycat to drive around town.

The greatest pleasure derived from owning a Spyker C8 Spyder is the knowledge that it was built expressly for you. A number of custom options are available to personalize the C8, subject only to the imagination and applicable safety regulations. Every owner is involved in the building process, and after ordering a Spyker, the identity of the car—its serial number—and that of its owner become inseparable. A personal web page allows you to follow the progress of the car during construction via a webcam at the factory. Build time is approximately four months from order.

For those who appreciate the aluminum jewels hammered out during the golden era of Italian and British coachbuilding, the Spyker is the culmination of a diminishing art form. The company builds its chassis from extruded box sections and folded sheet aluminum; the body is hand-formed and reveals details whose precision and tolerances are unattainable with other materials.

For those with a horological penchant, the Chronoswiss-Spyker dashboard is a must-have option. Built upon request, the instruments are designed by master watchmaker Gerd-Rüdiger Lang, owner and founder of Chronoswiss. His signature fluted bezels and clean white-on-black displays are mounted in the turned aluminum dash surrounded by butter-soft leather. A special clock and stopwatch are available in addition to the Chronoswiss Board Set.

The cockpit features turned and machined aluminum and quilted leather more reminiscent of a Chanel handbag than an automobile interior. The exposed shift linkage is remarkable; the pedal box is a work of art, and the turned aluminum dash is the most beautiful landscape of dials and toggles imaginable.