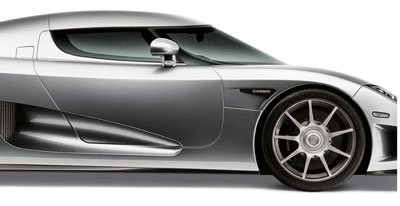 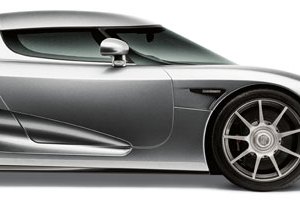 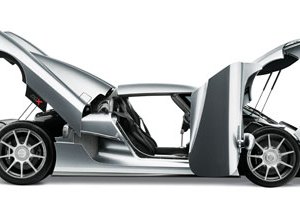 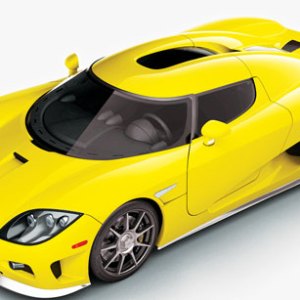 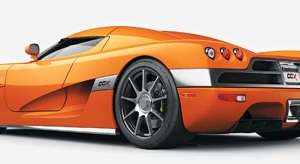 The Koenigsegg CCX, a made-to-order, 240-plus mph, 806 hp Swedish supercar, customized with the exterior and interior colors of your choice.

A private tour of the Koenigsegg factory near Angelholm, Sweden, guided by Christian von Koenigsegg, and an opportunity to test the CCX’s performance capabilities on the runway adjacent to the factory.

An invitation to drive the car in the Grande Parade at Le Mans in June and view the 24 Hours of Le Mans race from a private hospitality suite.

At 5 years old, Christian von Koenigsegg experienced an epiphany—one featuring puppets—that would shape his professional aspirations. At that age, he watched a movie called Pinchcliffe Grand Prix. “It’s a puppet movie about a bicycle repairman who lives on a Norwegian mountaintop, and he builds a racecar,” Koenigsegg explains. “When you’re 5, you don’t really know how to separate fiction from reality.”

Now 34, Koenigsegg owns the namesake company that builds the CCX. The car is real, but its performance figures seem fictitious. Propelled by an 806 hp supercharged engine, the 2,600-pound CCX will scream to 60 mph in 3.3 seconds and cover a quarter mile in less than 10 seconds. The vehicle will reach 97 mph in first gear, and its top speed has been clocked in excess of 240 mph.

The car’s design is even more surreal. It recalls that of a Transformer, the toy that folds from a car into a robot. With the exception of the rocker panels and bumpers, the carbon-fiber body panels are all hinged, movable parts. The hard top can be removed and stored in the front trunk. The engine cover and the rear fenders lift as a single unit. The doors, of course, also open, in a manner that Koenigsegg describes as “dihedral synchrohelix actuation.” Others might equate the motion to that of a pair of scissors.

In addition to his childhood muse, Koenigsegg lists the Tucker Torpedo, Czechoslovakia’s Tatraplan, the Lancia Stratos, and the Ferrari Dino as inspirations. “Each was innovative for its time, built by a small company that was driven by a man who had a vision,” he says.Koenigsegg himself drew up the original design sketches for the CCX. “We keep it to the bare essentials,” he explains. “We don’t put things on the car that are not of absolute necessity.” Extraneous adornments might hinder the car’s performance, and they would clash with his preference for practicality. “All the air intakes are there simply because we deemed them to be the best way to get air into the car. Everything is the result of desired function.”

Koenigsegg’s career as an automotive entrepreneur followed his success operating a trading company, which involved “buying and selling frozen chicken, plastic bags, medical supplies—anything to turn a profit,” he says. Those profits gave him the means to establish his own manufacturing business. “When I was in school, I was always obsessed with cars,” says Koenigsegg, who earned a degree in economics from the University of Brussels, because, he says, “I thought I had to have money to start a car company.”

The CCX, which arrives 10 years after Koenigsegg built his first working prototype—the letters stand for Competition Coupe, 10th anniversary—is certified street legal in the United States. “The biggest hurdle we faced was meeting California’s emissions requirements, which are the most stringent in the world,” Koenigsegg says. “With this kind of engine power, it was a big, big challenge.”

Six months before the Bugatti Veyron vaulted to fame by claiming the top speed for a production car, a Koenigsegg had broken the McLaren F1’s 13-year-old speed record. In February 2005, the Koenigsegg CCR reached 240.91 mph. “My goal was never to set the speed record, but simply to create a very advanced supercar,” Koenigsegg says. Nevertheless, he says that with further development, the CCX “could still meet or exceed the Veyron’s top speed.”

But speed is only one measure of a supercar’s quality. Koenigsegg is confident that his car will handle better than the Bugatti on any road course. “The Veyron can compete with us in a straight line, but not around a racetrack, and while other cars may keep up with us on the track, they lack the extreme top speed,” Koenigsegg says. “Our performance envelope is completely unique.”

Indeed it is, and one can only imagine what the CCX would be capable of if, as a child, Koenigsegg had watched Herbie the Love Bug.

If purchased by January 15, the car, which normally has an 18-month waiting list, will be delivered in June, after it has been displayed at the Geneva Motor Show in March and in time to be driven in the Grande Parade at Le Mans. (Click image to enlarge)