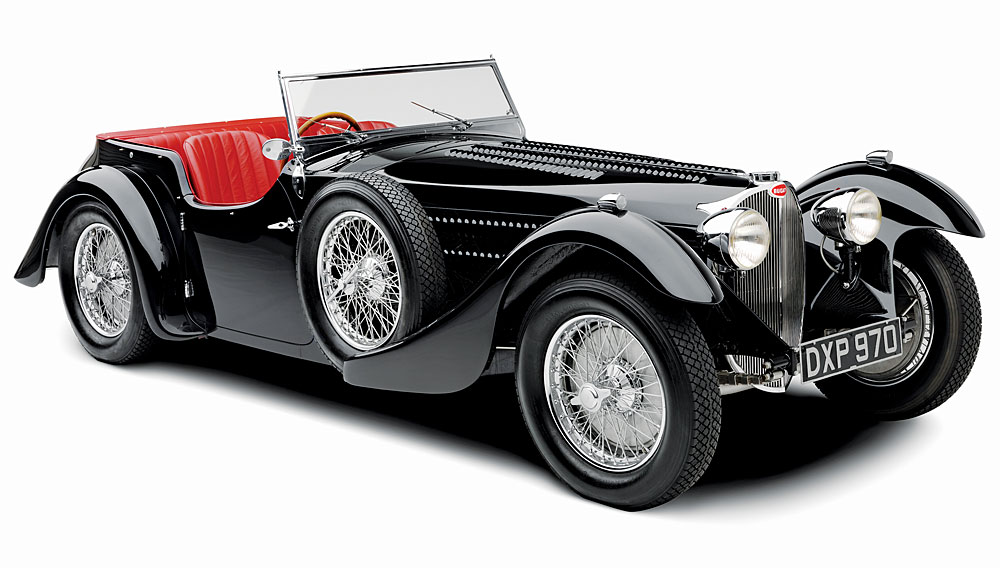 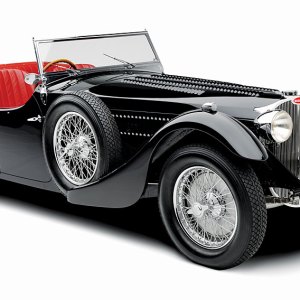 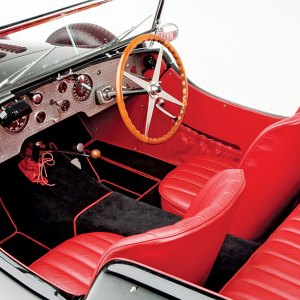 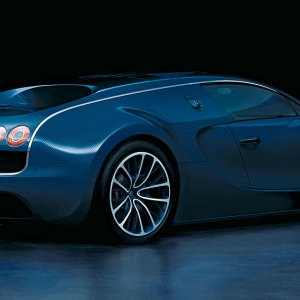 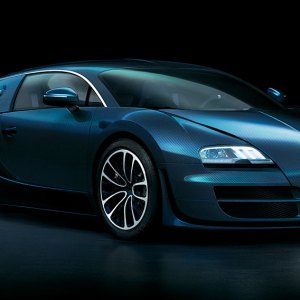 It is a rare occurrence when any vintage Bugatti becomes available on the open market, but the offering of a truly exceptional example of these French automotive masterpieces is cause for celebration among cognoscenti of the Molsheim marque, who are known to be particular about the pecking order of Bugatti automobiles. At the top of most lists are the cars belonging to the Type 57S series.

Between 1936 and 1938, Bugatti produced only 48 examples of the Type 57S, which had a lower and shorter chassis than the Type 57 (S stands for surbaissé, French for “lowered”). It sent 15 of those cars to England, and the London firm of Corsica Coach Works clothed eight of them, including six open-bodied examples that were among the most elegant and refined in the series.

In March 1937, Bugatti delivered this gift’s 1936 Bugatti Type 57SC Corsica Four-Place Open Tourer (chassis 57512) to Hon. Maurice Fox Pitt Lubbock, who had commissioned the body from Corsica. Within a year, he had the factory add a compressor, converting the car to SC specification. Lubbock was not alone in seeking more power and performance from his Bugatti. In time, most of the Type 57S models were returned to the factory to be equipped with compressors; Bugatti delivered only a couple of cars new with factory superchargers.

By 1950, chassis 57512 was in America, being raced by owner Walter Stocklin, who restored it in 1955, putting the original body back on the chassis. The car then passed through one more owner before the Blackhawk Collection acquired it in 1998 and completely restored it. Since then, the Bugatti has appeared at numerous events, including the Peb­ble Beach Concours d’Elegance. The Blackhawk Collection is offering the car for $7 million separately from the other items that compose this gift.

In addition to the Blackhawk Col­lection classic, this gift includes one of the 30 examples of the new 16.4 Super Sport that Bugatti is producing. This is the car that established a new land-speed record for a production automobile earlier this year when it achieved the heady velocity of 267 mph.

An even more potent version of the Veyron released nearly half a decade ago, the 16-cylinder, quad-supercharged Super Sport develops 1,200 hp, topping its predecessor by 199 hp. Power is delivered to all four wheels through a seamless, 7-speed twin-clutch automatic transmission that is docile as a lamb but strong as an ox. A redesigned chassis and suspension further hone the handling characteristics, enabling the car to achieve an otherworldly lateral acceleration of 1.4 g.

Bugatti offers the Super Sport painted (for about $2.1 million) or with a clear-coat finish (for about $2.4 million) that reveals the carbon-fiber bodywork in all its naked glory. This is indeed the ultimate Veyron. It is the final—and most extreme—iteration of the automobile that changed the supercar game for the 21st century.

As it did for the original Veyron six years ago when it created the Type 370, Parmigiani, the exclusive partner of Bugatti Automobiles since 2001, has produced a watch for the Super Sport. On the wrist of the test-driver this past summer as he piloted the Super Sport to its land-speed record, the aerodynamically styled Parmigiani Bugatti Super Sport watch references the oval theme that has informed Bugatti’s grille and fluid design language from the beginning.

As with the Type 370, a vertically oriented time display distinguishes the Super Sport watch. It also has large sapphire-crystal windows that expose the 10-day power reserve and the escapement. Both are situated on the back of the watch and together resemble a rear-mounted engine. The case is made of 18-karat polished and satin-finished white gold, and the dial has a black carbon face. The hands, hour indices, and counter are orange, the same hue as the record-breaking Bugatti. Following the lead of Bugatti, Par­migiani is making only 30 examples of this timepiece. Each is $259,000.

OriginTimes watch winders, from Germany’s MTE Bewegungstechnik, are designed to complement the world’s finest timepieces and, in the case of the $120,000 Big Block Winder (price includes the stand), the world’s finest automobile. Employing an actual Veyron engine block, the Big Block accommodates a winding mechanism in each of the 16 cylinders. The winders can be programmed according to the requirements of the individual timepiece. An organic light-emitting diode (OLED) panel atop the engine block indicates the status of each watch.

The Bugatti Type 57SC is being offered by the Blackhawk Collection separately from the rest of the gift items, which Bugatti is offering.