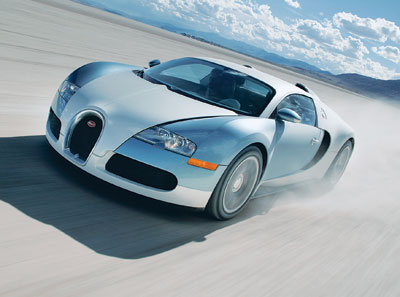 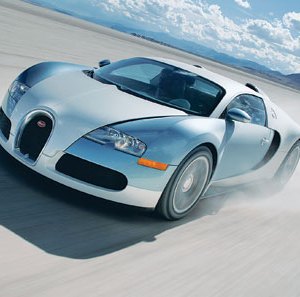 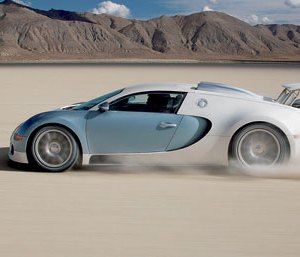 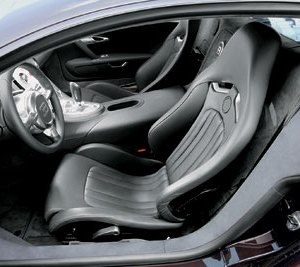 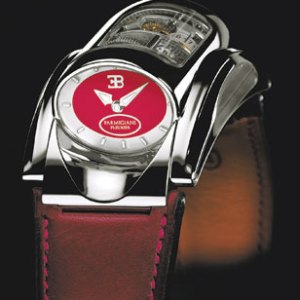 If you have ever wondered what it would feel like to see the horizon rushing toward you at 250 mph, the Bugatti Veyron 16.4 will put an end to all speculation. Select “top speed” mode, and the Veyron prepares for extreme low-earth orbit by hugging the ground a little closer, tucking in its rear wing spoiler, and closing its front intake flaps before doing its best imitation of a speeding bullet.

After seven years of design, development, testing, redesign, and retesting, the fastest, most powerful, and most expensive production car ever assembled is officially available for purchase.

If Superman’s red cape were at the dry cleaner’s, he would drive a Bugatti Veyron to work. To experience the car’s full velocity, you simply step on the gas pedal, tug on the paddle shifter until it reaches seventh gear (or leave the dual-clutch transmission in fully automatic mode), and hang on for the ride. Given a long-enough, empty-enough autobahn, the Veyron will outrun any modern racecar that can make more than just left turns.

One notch below “top speed” is a setting for “handling,” which offers the quickest means for getting through curves. Intake flaps open wide, the giant hydraulic rear wing elevates to variable angles for added stability and downforce, and the Veyron’s chassis rises to the occasion, literally, to provide proper cornering attitude. But don’t take our word for it. With this gift, you will spend a day testing the car’s handling limits on L’Anneau du Rhin racetrack with your own driving instructor, who will share with you all the finer points of the Veyron’s dynamic abilities. An additional set of wheels and tires is included to replace all the rubber you will no doubt leave on the track.

Below 100 mph, in its everyday Clark Kent mode, the Veyron may be the ultimate two-passenger Grand Touring car. Four turbochargers feed the mid-mounted, 8-liter, 16-cylinder engine to drive 987 hp and 922 ft lbs of torque to all four Michelin run-flat tires. From stoplights, the dash to 60 mph takes just 2.5 seconds, and 120 mph arrives in just over seven ticks. That should keep both Michael Schumacher and Lex Luthor off your tail. Carbon and ceramic discs collaborate with an air brake to control huge amounts of stopping force for the massive 4,200-pound coupe. The Veyron comes with a two-tone exterior, of which the most appropriate combination of colors might be bright red and Bugatti blue.

Named after Pierre Veyron, the French driver who in 1939 won Le Mans in a Type 57, the new Bugatti draws from a rich racing heritage. Veyron’s win may have been the marque’s last international victory, but Bugatti racecars still have won more timed events than Porsche and Ferrari combined.

When Le Patron, Ettore Bugatti, began building his cars in Molsheim nearly a century ago, Alsace was German territory. Not until 1918 did the region become part of France. Some 80 years later, Alsace still belongs to France, but Bugatti is back in German hands, with Volkswagen having acquired the rights to the brand name and invested an estimated $400 million in reviving the marque. It expects to produce 30 to 40 Veyrons per year, and at least one Robb Report reader can be among the first to own one.

In addition to the car, you will enjoy a three-day excursion to Molsheim, France, the headquarters of Bugatti. There, you will tour the Veyron assembly line with Bugatti historian Julius Kruta before receiving your new vehicle. While in France, you will visit the L’Anneau du Rhin racetrack for high-speed driving lessons in your Veyron.

Also included with this gift is the Parmigiani Bugatti Veyron watch in all three of its available dial colors: blue, red, and silver. Parmigiani will make only 150 Bugatti watches, releasing 50 per year in each of those colors.

To celebrate the achievements of the Bugatti family’s other renowned members, London’s Sladmore Gallery, which specializes in sculptures by the early 20th-century artist Rembrandt Bugatti, will provide a Bugatti big cat sculpture and a piece of furniture by Carlo Bugatti. Rembrandt, Ettore’s younger brother, was an accomplished sculptor who concentrated on animals; Carlo, Rembrandt and Ettore’s father, was a noted furniture designer.

Rembrandt’s panthers, lions, and other big cats constitute one-sixth of his artistic output and are especially coveted by collectors. (His big cat sculptures routinely command at least $400,000 each.) Sladmore will locate a cat sculpture such as the Nubian Lion, a 1910 bronze (shown here), of which three castings exist.

When gallery director Edward Horswell purchased the Carlo Bugatti throne chair included in this package, he originally intended it as a Christmas gift for himself, but it has not yet followed him back to England; the chair is on loan to an American museum. The theatrical-looking piece of furniture, which Bugatti created circa 1900, features ebonized wood and bone inlay and hammered copper relief work. Parchment covers the arms, seat, and backrest.

Limited to one Robb Report reader. Transportation to and from Molsheim, France, is not included.