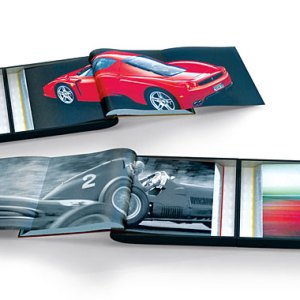 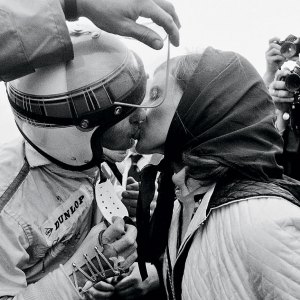 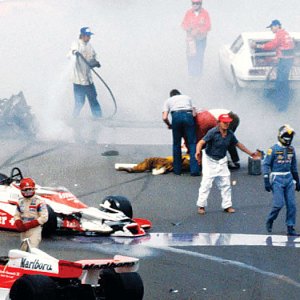 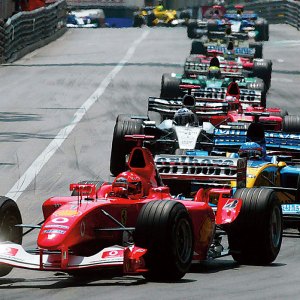 A race-driven F1 Ferrari. — Two VIP passes to all 20 Formula One races during the 2008–2009 season and an all-access pass to the Ferrari paddock and pit area during the 2008 Monaco Grand Prix. — A private dinner with Damon Hill and other Grand Prix champion drivers, tea with Formula One president Bernard Charles “Bernie” Ecclestone, and lunch with F/1 Ferrari team boss Jean Todt.

The year 2004 was a memorable one for the Formula One Ferrari team. It won the Constructors’ Championship, and its top driver, Michael Schumacher, won his seventh Drivers’ Championship. Schumacher finished 34 points ahead of teammate Rubens Barrichello after collecting 13 victories in 18 races. The featured item in a gift arranged by Kraken Sport & Media UK (see “Opus Four,” at the end) is an F2004-GA from that season. It is the only race-driven car from 2004 that Ferrari plans to release.

The Robb Report reader who purchases this gift also will gain membership in the F1 Clienti owners club, which organizes events where members drive and race their cars and Scuderia Ferrari technicians are on hand to service the vehicles.

While few, if any, drivers can experience an F/1 car’s capabilities as Schumacher did, you will come close. Former British Grand Prix champion Damon Hill battled Schumacher during the mid-1990s, finishing second to him during Schumacher’s world-championship seasons in 1994 and 1995 and surpassing him to claim his own world title in 1996. In an F/1 car similar to the one included with this gift, but equipped with two seats, you will sit next to Hill as he puts the vehicle through its paces on a racetrack. (The specific track has yet to be determined.) “That will be one scary experience, I can tell you,” says Karl Fowler, chief executive of Kraken Sport & Media UK.

The F1 car’s specs, as well as Damon Hill’s career, are chronicled in the 850-page, 90-pound F1 Opus. One of only 100 Champions Editions of the F1 Opus, which includes a page signed by all 18 living Grand Prix champion drivers, accompanies this gift.

An Enzo edition of the Ferrari Opus also is part of this gift. Similar in page count and in heft to the F1 Opus, the Enzo edition was created for the 400 Ferrari Enzo owners and contains a page with the signatures of all five Ferrari Grand Prix champions.

In addition to reading about the company’s race team, you can view the squad in action in the Ferrari paddock and pit area during the 2008 Monaco Grand Prix. “It’s allowing someone to see the story of the race from a completely different angle,” says Fowler. “There’s nothing like seeing it when you’re standing five yards away. You’ll have a pair of headphones where you’ll be able to listen live to the driver and the commander of the pit wall.”

{ The gift also features a tour of the Ferrari headquarters and factory and a behind-the-wheel drive at the company’s test track in Maranello, Italy. The price of the gift includes the costs of all transportation and accommodations. }

Karl Fowler knew he had to do something different. If he were going to create a collection of sports-themed books, they would have to offer readers information they did not already know and images they had not already seen. “The philosophy is telling iconic stories in ways that haven’t been told before,” says Fowler, whose company, Kraken Sport & Media UK, is the publisher of the Opus collection of sports books, which includes tomes on the Super Bowl, the Manchester United soccer team, Formula One racing, and Ferrari. Each is priced at $3,000, and special editions of the books, featuring signatures of all the living champions or MVPs, cost $40,000. (This gift includes special editions of F1 Opus and Ferrari Opus.) Fowler recognized that fans of these titles’ respective sports already were familiar with the histories and characters, so he wanted to offer readers unique insights. To present the Ferrari story, for instance, the book’s editors went directly to the source, the brand’s late founder. “We’re reprinting some of Enzo Ferrari’s original, handwritten letters,” Fowler says. “When he wrote letters, he always wrote in pink ink.” Long before he began designing sports cars, Enzo, Fowler says, helped his father in the family’s printing business by collecting buckets of leftover ink. When the various ink colors mixed in the buckets, they produced a bright pink. “It’s a tribute to his father,” Fowler says of Enzo’s use of the color, “and it’s only by sitting down with people at Ferrari that you learn these little snippets that end up telling the story differently.” To show the Ferrari story differently, Fowler enlisted British photojournalist Tom Stoddart, who primarily photographs third-world nations and war zones. “I wanted to bring a different eye, a different perspective, to capture the spirit of Ferrari,” says Fowler. The 40 pages of Stoddart’s black-and-white photography include images of the villa at Ferrari’s headquarters in Maranello, Italy, that served as Enzo’s office. The building is normally off-limits to all visitors and members of the media.