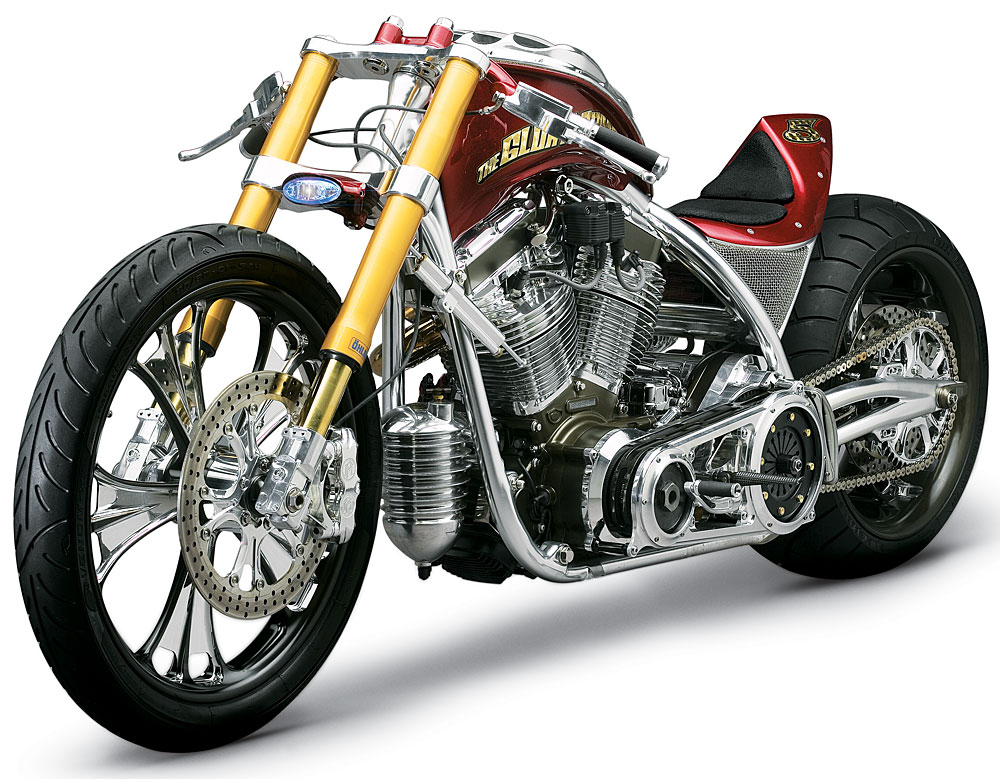 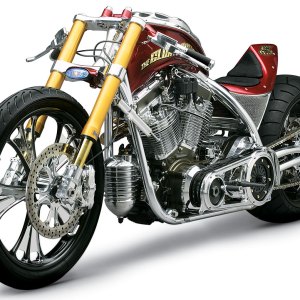 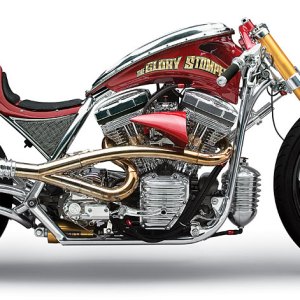 Two custom motorcycles from designer/builder Roland Sands: a replica of the Glory Stomper chopper and an original design incorporating a MotoGP engine.

“Torpedo” was one of the many nicknames Roland Sands garnered during his eight years as a professional sportbike racer—and it is one that, he says, no longer applies. “Now I would think twice about everything I used to do,” says Sands. “My decisions were based solely on how fun things were going to be in the next five minutes, as opposed to where my life was going to be in the next two to three weeks, sitting in the hospital.”

Sands’ fearless riding style caused him to spend quite a few weeks in the hospital over the course of his career, recovering from a total of 30 or so broken bones. However, the emotional strain of racing, more than the risk of injury, influenced Sands’ decision to retire in 2002. “It’s such a performance-driven thing,” the 33-year-old says of his former profession, his remarks peppered with frequent expletives. “People only respect you as a racer when you’re going fast, and you’re only as good as your last race. That wears on a person. It came to a point in my life where winning didn’t matter to me anymore. I still love racing. I love motorcycles. I love being out at the racetrack, but I’m doing more of what I enjoy now.”

Now he runs Roland Sands Design, a business located just southeast of Los Angeles that produces a line of sportbike-influenced, bolt-on parts and the occasional custom motorcycle, seven of which are on display in the lobby of his shop. Among these bikes is the Glory Stomper, the first motorcycle that Sands designed and constructed from scratch. He crafted the Glory Stomper for a 2005 episode of the Discovery Channel’s Biker Build-Off, a program that places two builders in competition to create the better bike. As a part of this gift, Sands will build a replica of the Glory Stomper (see “Glory, Glory Hallelujah” below).

The display in the Roland Sands Design lobby also includes KRV5, the world’s only nonracing bike equipped with a MotoGP engine. Sands is acquiring another MotoGP engine, around which he will design and construct a second bespoke bike. According to Sands, the engine produces 200 hp and can propel a bike to a top speed that exceeds 200 mph.

“It represents the unobtainable,” says Sands. “Factories never let a GP spec engine out of their sight because so many development secrets are hidden within its cases. Anyone can go out and buy a Ferrari. Anyone can own a Bentley Flying Spur. Anyone can own a yacht. But nobody can say that they have a functioning MotoGP bike in their house—except me.” Except him, Sands could add, and the Robb Report reader who purchases this gift.

{ Because each bike will require six months to design and build, delivery will follow a year after the gift is purchased. }

Roland Sands has employed colorful, maybe even disturbing, imagery to describe the Glory Stomper, his first custom build and the bike he will replicate for a Robb Report reader. “If an MV Agusta superbike and an ’03 Softail had dirty sex in a seedy motel,” he has said, “this would be their offspring.” Instead of waiting for such a rendezvous to occur, Sands conceived and then constructed the Glory Stomper himself. “The idea came to me in Sturgis [the South Dakota motorcycle rally],” he says. “I was sleeping off a hangover, and the idea popped into my head.” For this gift, Sands is not planning to build an identical twin to the Glory Stomper; he wants to improve upon his original design. “I’d change the tail section; I’d change the handlebars a little bit; and I’d give it a bit better geometry,” he says. “The last time, we built it from the ground up in three weeks. It was a fully experimental bike. Building it the second time is always better.”