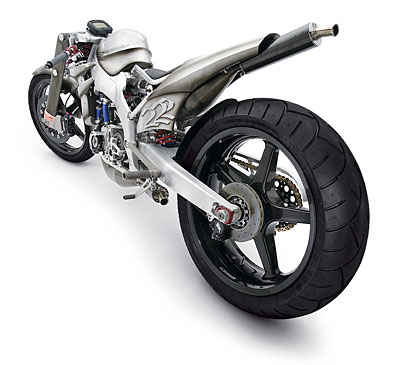 During his childhood in British Columbia, Canada, Roger Goldammer often helped his father repair his Jaguar and his piston-powered aircraft.

Ultimately, however, Goldammer succumbed to the spell of the motorcycle. “Emotionally, you can go from exhilaration to relaxation to fear, all in a 10-minute bike ride,” he says. “That’s fun. You certainly know you’re alive when you’re on a motorcycle.”

At his shop in Kelowna, B.C., the 39-year-old Goldammer builds custom bikes whose looks alone elicit emotional reactions. In 2004 and 2005, his creations won the World Championship of Custom Bike Building award. Earlier this year, he made his first racing motorcycle, ExperiMental, which he is offering to a Robb Report reader. Goldammer built the motorcycle for Biker Build-Off, a Discovery Channel program that pits two custom motorcycle builders against each other. When the show’s producers asked Goldammer to participate, he suggested a contest in which he and another builder would design motorcycles and test them at Utah’s Bonneville Salt Flats, a popular venue for pushing speedy machines to their limits. (The episode was scheduled to air October 30.)

In addition to satisfying his long-held desire to travel to Bonneville, Goldammer enjoyed the challenge of making a beautiful motorcycle that also could perform. “The custom bike world is largely image-driven. It’s all about looks, and usually, function is dramatically compromised,” he says. “With this one, I achieved a cool, aggressive look, but I also [produced] a functional race bike.”

ExperiMental is, at its core, a dirt bike, derived from an aluminum Honda dirt bike frame and fitted with a modified two-stroke Rotax/Aprilia 250 cc engine. Goldammer says that although the original frame has been severely modified, about 80 percent of it remains. In September, during the third annual Speed Trials by BUB meeting at Bonneville, Goldammer reached a speed of 128.7 mph on ExperiMental, shattering the American Motorcyclist Association (AMA) record for machines in its class. (The previous mark, which was achieved in 1977, was 109.2 mph.)

“For me, it was an interesting challenge,” Goldammer says. “I don’t build racing bikes for a living, but I did my homework and built a bike that seems to work. I sided more toward the visual aspect in the bodywork design, but it serves the purpose of a racing bike. I managed to capture both.”

Because it is a racing motorcycle, ExperiMental lacks the upholstery of a touring bike, but it still provides a fairly comfortable ride. “It’s nothing you’d want to cruise across the country on, but the seat is made from high-density foam,” says the bike’s builder, Roger Goldammer. A small black box, placed at the front of the bike where the rider can see it, contains a computer, fitted with a large rectangular screen, which collected data during Goldammer’s record run.

Racing rules dictate that bikes must not have kickstands, but this motorcycle can accommodate one if its new owner requests it. The “222” that appears below the seat is the bike’s American Motorcyclist Association (AMA) number. Goldammer chose it from among the AMA’s available numbers because it closely resembles the “22” he wanted most. That number is a subtle reference to his success as a custom motorcycle builder. “Two years, two world championships,” Goldammer says. “Why not?”

Among the motorcycles that have earned acclaim for Roger Goldammer is BTR3, a machine that won the 2004 World Championship of Custom Bike Building and the Artistry of Iron competition held at the Las Vegas Bikefest the same year. Goldammer drew on the legacy of board track racing—competitions that were run on wooden ovals in the early 20th century—when creating BTR3. “My main focus was trying to capture the signature features of the era,” he says. “Then, motorcycles had only recently evolved from the bicycle.” His candy apple red machine has large-diameter wheels, handlebars that turn down, and a seat resembling a bicycle’s.

Trouble, a 2005 creation, brought him anything but. The motorcycle, which won a second World Championship and another Artistry in Iron victory, recalls early Harley-Davidsons that raced with their rear cylinders covered by a steel plate. Goldammer’s twist was to replace the rear cylinder with a supercharger.