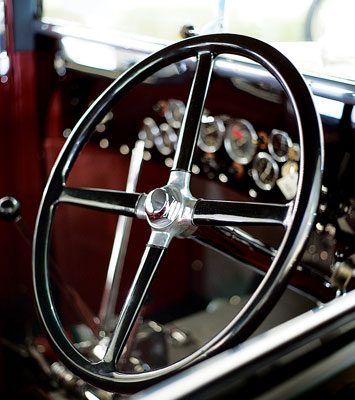 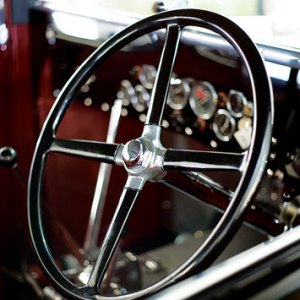 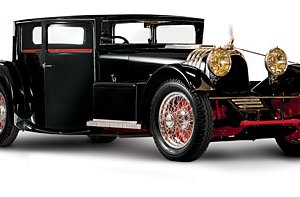 A 1931 Voisin C20 Simoun Demi-Berline, the only known remaining car of its kind.

It seems fitting that Gabriel Voisin’s surname should be an anagram for vision, as the French inventor often was ahead of his time when creating vehicles, whether they were intended to be driven or flown.

By the time the Wright brothers achieved their first successful flight along the North Carolina shoreline at the turn of the 20th century, Voisin already had delved into aircraft design. Soon after the Wright brothers had demonstrated that flight was possible, Ernest Archdeacon, a champion of France’s early aviation efforts, commissioned Voisin to build a series of gliders.

Les Frères Voisin, the aviation company that Voisin and his brother, Charles, formed in 1906, had produced dozens of airplanes—double-winged craft with a series of vertical panels between the two wings—before the brothers built their first military aircraft in 1912. World War I proved prosperous for Voisin’s company, which built about 11,000 planes for France and a dozen other countries during that period. In fact, a Voisin aircraft scored the first aerial victory of the war, when its pilot shot down a German Aviatik B.1.

Toward the end of the war, however, Voisin stopped manufacturing airplanes, either because he suffered a crisis of conscience over his products’ contribution to the carnage, or because he had the foresight to recognize that demand for his planes would plummet once the war ended.

Voisin turned his attention from the runway to the road and began designing automobiles. Incorporating what he had learned about aerodynamics and gravitational pull from building airplanes, he created cars that he dubbed Avions Voisin, or Voisin airplanes. His first automotive effort, 1920’s 4-cylinder, 4-liter M1 (also known as the 18CV), was hardly revolutionary in its architecture. However, his affinity for Art Deco soon became evident in his early cars: streamlined vehicles that bore a resemblance to the wing of an airplane. Then in 1927, Voisin produced the Lumineuse, a vehicle displaying an abundance of straight lines and right angles. Although he referred to the Lumineuse as a coffin because of its boxy shape, the car became fashionable.

In 1931, at the height of its so-called square angle period, Voisin introduced his C20 Simoun Demi-Berline, a 12-cylinder vehicle that originally sold for $7,800, a price few could afford during the Depression. Consequently, Voisin made fewer than 60 C20s. The one offered in this gift is the only C20 that is known to have survived.Constantly on the brink of bankruptcy, Voisin’s company permanently closed its doors in September 1939, after producing only about 8,000 vehicles over the course of two decades. It is believed that fewer than 100 Voisin-built cars still exist.

Gabriel Voisin’s early automobiles claimed victories in numerous hill climbs and sprints near his native Belleville sur Saône, France. His cars also raced successfully against the Blue Train, from Paris to Nice and Paris to Milan. At the French Automobile Club’s 1922 Grand Prix in Strasbourg, Voisin-built cars finished first, second, third, and fifth in the touring car category. But the designer had loftier ambitions.

The following year, he entered his Voisin Laboratoire in the grand prix’s racing division against such established manufacturers as Sunbeam, Bugatti, and Fiat. The 1923 Laboratoire had a streamlined, aluminum body modeled after an airplane wing and a 2-liter engine. Four Laboratoires entered the field of 18 vehicles, and while a Sunbeam ultimately rode to victory lane, a Voisin was one of only five cars that finished the two-day race.

Away from the racetrack, Voisin perhaps had a more lasting impact on the automotive industry. He invented a silent starter mechanism known as the Dynastart and later equipped the 1934 Aerodyne with a sliding sunroof. Years after his company, Frères Voisin, shut down, and following World War II, Voisin opened a small research workshop in France. There he conceived a number of experimental designs, including one for a supersonic passenger jet that was similar to that of Concorde. In 1950 he designed the Biscooter, a small, two-seat, aluminum-bodied town car that later was renamed the Biscuter and produced in large numbers (about 12,000) in Spain until the early 1960s.