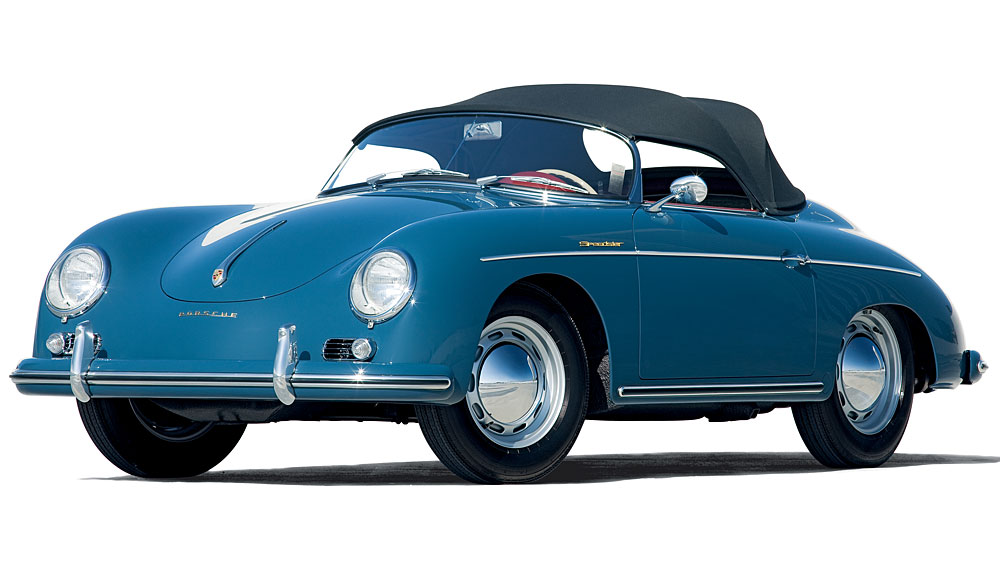 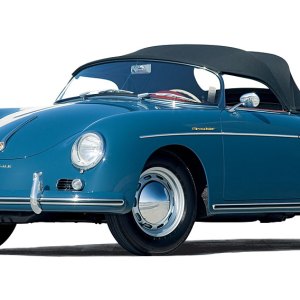 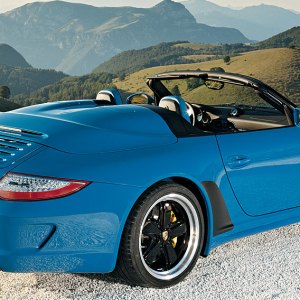 Delivery of the new Speedster at the Porsche factory in Zuffenhausen, Germany.

Private tour of the factory.

Two days of driving instruction for two people at the Porsche Sport Driving School in Leeds, Ala.

When importer Max Hoffman brought Porsche and other European marques (including Mercedes-Benz) to the United States in the 1950s, the German automobiles were novelties among a sea of the big-finned land yachts to which Americans had become accustomed. Hoffman knew that Porsche drivers were an unusual breed, so instead of asking for more complex and well-appointed versions of the 356, he urged the factory to develop an even more elemental, stripped-down version of the beloved Stuttgart bathtub for the first-time Porsche buyer who wanted a bare-bones, race-ready version of the convertible. Thus the 356 Speedster was born, and of all the 356 iterations produced from 1948 to 1965, the Speedsters (1954–58) have become the most collectible of the early Porsche road cars.

With a production run of nearly 4,200, the Speedster was not a rarity. But like many so-called entry-level sports cars (a new Speedster cost about $3,600), most were driven within an inch of their lives, and few have survived the enthusiasm of their owners or the ravages of rust and entropy. Only a handful of perfect examples still exist, and their owners are regarded as the most obsessive stewards of any marque, known to focus on the minutest aspects of originality and detail when competing at the international-concours level.

This gift’s 1958 Porsche 356 1600 Normal Speedster, correctly and authentically restored to as-new condition by Tim Goodrich over the span of several years, must be regarded as the world-class reference standard. The car, which always has been based in California, retains all of its original driveline. Every component, from the crankcase to trim pieces, is original to this car and restored; none has been replaced with an NOS or reproduction part. Even the tacks for the carpet are original. The car also has its original and complete set of maintenance books and tools. Junior Conway, widely considered the world’s best car painter, provided the fresh $80,000 coating of aquamarine blue, the color that the car originally sported.

While winning the Best in Class and Best in Show categories at a recent Porsche Parade, this Speedster earned 299.3 out of 300 points, and it has taken top honors in every show in which it has been entered. Clearly, no 356 Speedster is better than this one.

In addition to the best of the original Speedsters, this gift includes one of the 100 or so 2011 Porsche 911 Speedsters produced for the U.S. market. This is the fourth Porsche model to wear the Speedster script. Enthusiasts will recall that the second Speedsters—low-slung and narrow- or wide-hipped machines—arrived in the United States in 1989. Porsche produced a limited quantity of these cars, and collectors immediately salted away many of them. Today their values are creeping toward six figures. A third limited-edition Speedster came to America for one brief model year in 1994.

Seventeen model years is a long time to await a fourth—though likely not final—Speedster. Like the two sequels that followed the original, the 2011 model wears the trademark cut-down sliver of a windscreen and “Speedster humps” that have defined the model since the second-generation version. Under the hood, the 408 hp flat-six engine that also powers the Carrera GTS—the most potent of the non-Turbo, non-GT3 models in the current 997 model range—makes this car the highest-performance Speedster ever.

The gift recipient and one guest will fly first-class on Lufthansa to and from Stuttgart, Germany, to take delivery of the new Speedster at the Porsche factory in Zuffenhausen. While there, they will receive a private tour of the factory and the Porsche Museum and meet with a 911 Speedster project manager.

The gift recipient can drive the Speedster in Europe for a period of time before having it shipped to the United States, or he or she can have the car shipped immediately after delivery.

In addition to the factory experience, the gift recipient and a guest will receive two days of instruction—in Porsche sports cars from professional drivers—at the Porsche Sport Driving School in Leeds, Ala., just outside of Birmingham.

The 1958 Porsche Speedster is being offered by its owner separately from the rest of the gift items, which are being offered by Porsche Cars North America. The gift price covers shipping of the new Speedster to an American destination, first-class air transportation for two to Stuttgart, Germany, and one-night accommodations for two at the Hotel am Schlossgarten or the Steigenberger Graf Zeppelin hotel in Stuttgart.