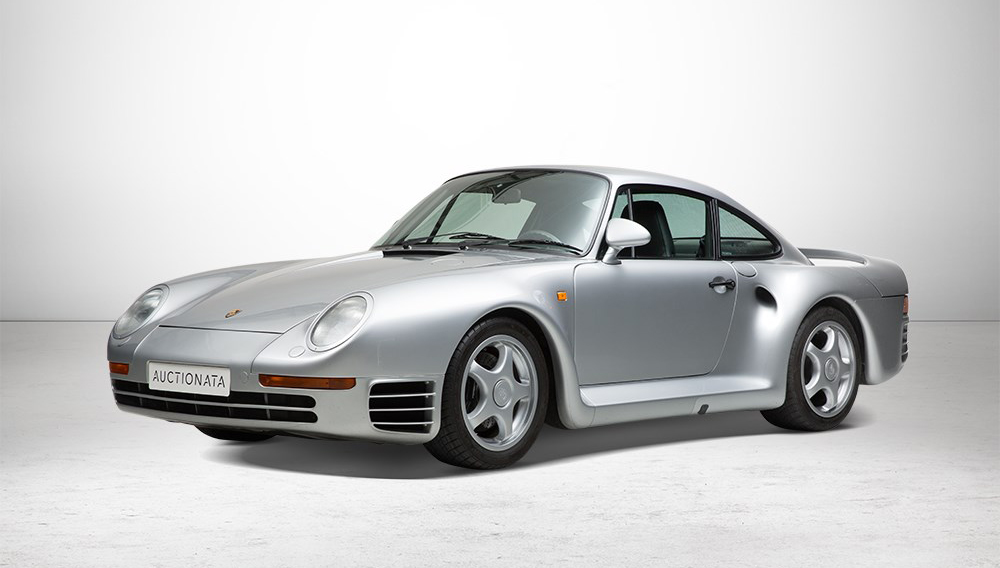 To celebrate the grand finale of this year’s auction season, the leading online auction house Auctionata, is getting ready for another superb selection of unique classic cars, this time from Porsche’s 911-era. In its first “Porsche Only” auction on Saturday, December 12, 2015 at 6 pm CET, Auctionata will present 25 vehicles from Porsche’s most successful production series of all time, whose prime development spanned more than four decades. All of the 25 classics, with a total estimated value of 6.3 million euro, are equipped with an air-cooled, 6-cylinder boxer engine and are in great, for the most part, unrestored, original condition. The auction, hosted by German author and Porsche-expert Dr. Ulf Poschardt, will be broadcasted via livestream from Hamburg’s Prototype car museum on www.auctionata.com, and will be accessible to bidders worldwide.

Amidst the 24 Porsche 911s, a Porsche 959, probably the best-known offshoot of the 911, is expected to be the outstanding highlight of the auction. As one of the most famous developments of the Porsche AG, and built on the basis of the Porsche 911, the Porsche 959 was presented in a version ready for series production on the IAA in 1985. Just in time for the 30-year anniversary, Auctionata will auction a model from 1989, which is in almost mint condition with a mileage of only 8,300 km. The vehicle has been in the possession of a collector since its initial delivery, and will enter the auction with a starting price of €600,000. Another star is a 911 ST, Group IV Special GT from 1970, only 10 of which were ever built. With an empty weight of 930 kg and 230 PS strong, the Porsche has a 2.3 liter boxer engine, and an astonishing power-to-weight-ratio of 4.04 kg/PS. It will go under the hammer with a starting price of €650,000. In 1975, Porsche began the production of a new top model of the 911 series – the Turbo 3.0. Due to its short production time from 1975 to 1977, only 2,800 vehicles were manufactured, making the car a coveted collector’s item. A model in unrestored original condition from the first production year will be offered with a starting price of €90,000.

Porsche lovers can also look forward to a 1997 993 Turbo with a starting price of €85,000. This model embodies the last evolutionary step of the legendary Porsche 911, with air-cooled boxer engine and biturbo-charger. The production ceased in 1998 and ended the era of the air-cooled Porsche 911.

For “Porsche Only”, Auctionata will again use its unique split-screen technology to broadcast the auction via livestream from two separate locations. All vehicles will be located at the Prototyp car museum in Hamburg, where Dr. Ulf Poschardt, Porsche expert and successful author of the standard work “911”, will host the auction show. At the same time, the hammer will be brought down by an auctioneer at the Auctionata studio in Berlin. Hence, bidders can follow the auction live in Hamburg and worldwide via computer, tablet and the “Auctionata Live” iPhone App.

For “Porsche Only”, Auctionata has cooperated with “Karero”, a renowned Berlin-based car specialist, whose focus is on classic Porsches: “For the curation of this auction, we are proud to collaborate with experienced partner with outstanding expertise in the Porsche market. Together with Karero and its focus on air-cooled 911 and unrestored Porsche vehicles, we were able to obtain some highly sought after and rare vehicles for this auction”, explains Wolfgang Jochum, Head of Classic Cars Department at Auctionata.

All cars can be previewed on Saturday, December 12, from 2 pm CET, at Prototyp car museum, Shanghaiallee 7, 20457 Hamburg. The auction from 6 pm CET is accessible to the public. We kindly ask you for prior registration (email: elina.vorobjeva@auctionata.com).

Auctionata brings the world of unique works of art, antiques and luxury collectibles to the internet via its frequent livestream auction broadcasts from locations in Berlin and New York. Users from all over the world bid in Auctionata’s livestream auctions at any time, from any device and from wherever they are located. Auctionata also offers the typical services of a traditional auction house online via its website: Valuation, authentication, curation, auction and all related services including a full authenticity guarantee. Potential sellers benefit from the free and non-binding online valuation, which gives a first quick perspective on potential auction results. Auctionata professionals and its global network of over 300 experts from more than 40 countries ensure a proper assessment and authentication of each object that goes to auction. The spectrum ranges from paintings, prints, sculptures and antiques to furniture, design objects and porcelain, to watches, jewelry, wine and even classic cars. The company was launched by Alexander Zacke (CEO) and Georg Untersalmberger (CTO) in 2012 in a hotel room in Berlin. Today Auctionata is the biggest auction house in Germany and operates globally with offices in New York, London, Zurich, Rome and Madrid. The company recorded total net sales of €31.5 million in 2014, and €35.7 million in the first half of 2015. The investors include Earlybird, HV Holtzbrick Ventures, Hearst Ventures and Groupe Arnault, controlling shareholder of French luxury group LVMH Moët Hennessy Louis Vuitton.