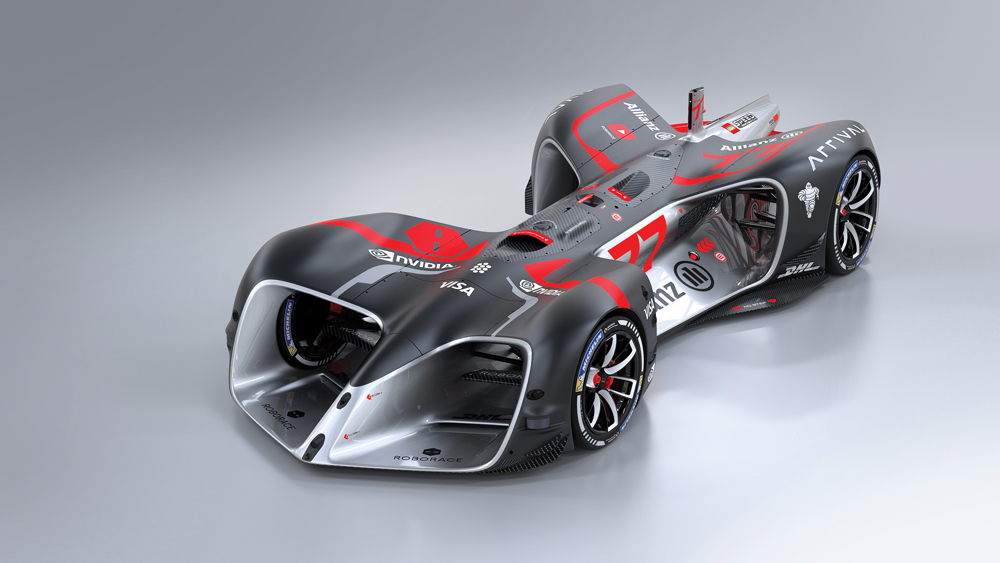 With his Robocar concept, vehicular visionary Daniel Simon—the man behind the imaginativemachines in such films as Tron: Legacy, Oblivion, and Star Wars: The Last Jedi—dares those dubious of self-driving technology to dream. “The approach to the design and engineering of the Robocar was clear—make it the unrivaled ambassador of autonomous racecars,” says the California-based consultant, who has collaborated with Bugatti, Lotus Motorcycles, and SpaceX. “It’s a breed of machines so new and alienating that we wanted this concept to inspire even the doubtful.” The battery-powered speedster features four motors, an innovative system of sensors, and an aesthetic that’s apatetic of an angry insect. “We pursued an animalistic look while being aerodynamically intelligent and visually iconic,” says Simon. Although flush with sci-fi flair, the remarkable racer is a reality and will serve as the official model for the pending Roborace competitive series.  —Viju Mathew

If Nature is ever built, the yachting world will be a far richer place. The 394-foot concept by Sinot Exclusive Yacht Design has more creative touches than any yacht launched in the last 5 years. The Dutch studio presented the megayacht at the Monaco Yacht Show, billing the “holistic” project as one that fuses beauty with functionality. But Nature is much more than that. The  residential exterior is simple and unassuming, featuring walls of glass, layered terraces that connect most exterior spaces with the interior, and upper decks that resemble a Japanese teahouse in profile.

The owner’s deck is likewise large and spacious, with the bedroom housing a glass-enclosed garden in the center with floor-to-ceiling windows that reveal the waterfront. The owners can also enjoy outdoor strolls on their private terrace. This lower deck is connected to the upper decks by a grand circular staircase that winds up to the nearly 1,000-square-foot “panorama” deck, which offers exceptional alfresco dining. Nature’s six guest staterooms, two VIP staterooms, and owner’s stateroom are all spacious, offering windows to the sea. The observatory, arguably the yacht’s most inspired space, is a glass room designed into the forward bow area that gives unimpeded views from both sides. Nature’s spa includes a large swimming pool at sea level, with waterfalls and other features to promote the yacht’s inherent tranquility. The main deck above slides open on both sides to bring sunshine to the pool area.  —Michael Verdon

Televisions are a partisan issue. Tech enthusiasts want to celebrate their glorious expanse, while interior designers want them to disappear from view completely. Must we look to Europe for an aesthetic détente? Part sculpture, part electronic feat, the Loewe Bild X concept, designed by London-based Bodo Sperlein—the former creative director of the German brand Loewe—gives the conventional TV a foxy, modernist makeover. Suspending it within a linear anodized- bronze frame, Sperlein proposes adifferent kind of viewing experience—one where the TV becomes its own thoughtful design statement (rescued from the banal and boxy functionality of a traditional appliance) and is nolonger at odds with a well-appointed room. But innovation is nothing without engineering muscle, and the Bild X might have been just another bold, futurist concept if not for the ultrathin, ultracool display panel enabled by the latest organic light-emitting diode (OLED) wallpaper technology and Loewe’s proprietary software. OLED panels have been on the rise and have been coveted not only for their self-illuminating pixels, which offer color richness, but also for their ability to facilitate thinner, more flexible screens than are possible with LEDs or LCDs. Loewe has incorporated OLEDs in six of its Bild models, though Sperlein’s latest design adheres to a higher minimalist code. Stripped of its bulk, with electrical components  housed elsewhere, the Bild X presents an adaptable, modular design that can be configured as a wall-mounted unit, console, or floor-standing model, featuring a marble base meant to lend “a classical longevity that stands out against today’s throwaway culture,” the designer relays. “Taking this minimalism and restraint, we aimed to dispel the masculine association with technology by combining a geometric structure with the softness of rounded edges.” Sperlein may have finally given the television true style cred.  —Arianne Nardo