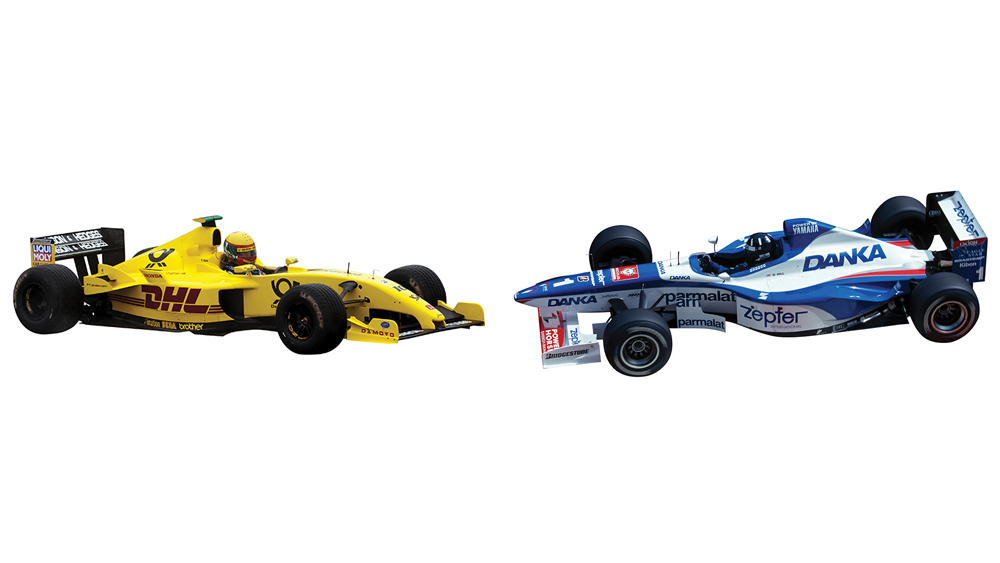 With Formula 1’s 73rd season just off the starting line, motorsport’s premier race series is in the midst of a turbocharged popularity surge thanks to last year’s riveting battle between seven-time champion Lewis Hamilton and heir apparent Max Verstappen—not to mention the Netflix documentary series Formula 1: Drive to Survive, with its focus on the real-life drama both inside and outside the cars.

But for the ultimate thrill, try a turn behind the wheel of an actual pedigreed F1 racer. Even decades-old competition chassis remain among the most high-tech, demanding and rare vehicles on the planet, and with the ability to pilot them around some of the world’s most famous circuits, you can consider the rest of your automotive bucket list obsolete.

Instead of an F1 circuit, TrackDays will have you flying around England’s Bovingdon Airfield in the same Jordan EJ12 that Takuma Sato piloted through his rookie season in 2002. Before drivers take on the ex-Sato sled and its nearly 600 hp, 10,500 rpm V-10, the five-hour curriculum (starting at approximately $1,300) includes a preparatory 14 laps of skill-honing drills in a sports car, plus another 20 laps in an open-wheel F1000. For the finale, 10 laps in the Jordan await, though up to 20 more can be added for a supplemental charge.

Founded and run by former F1 test driver and Formula 3 champion Laurent Redon, LRS Formula offers three levels of action. The Bronze experience includes a 650 hp Benetton B198 from 1998 or a 2001-season Prost AP04, while the Silver option introduces the 750 hp Jaguar R3, circa 2002. But it’s the Gold selection, priced from around $6,500, that unleashes the real fury: a 2011 Williams FW33 producing 750 hp at 18,000 rpm. (That’s down from the KERS-enhanced 830 hp on hand when Rubens Barrichello and Pastor Maldonado were in the cockpit, but don’t flatter yourself that you’ll miss it.) Drive days take place at acclaimed circuits in France, Spain and Portugal, and begin with stints in 200 hp Formula Renault 2.0 cars, the type Kimi Räikkönen raced prior to finding F1 glory.

With 22 years in operation, Italy’s Puresport Racing School puts you behind the wheel of the A18 racer campaigned by 1996 World Drivers’ Champion Damon Hill during his 1997 season with the Arrows team. Originally fit with a 700 hp Yamaha V-10, the car is now propelled by a 3.0-liter Cosworth V-8 delivering 500 hp at 9,000 rpm. (Prior to buckling in to Hill’s former ride, drivers warm up with 10 laps in a 255 hp Formula 3 machine.) With sessions starting at $4,300, set dates are available across famed European circuits in Belgium, Germany and Italy, where participants experience the tracks in their entirety. There’s also the option of a camera car to record your personal Grand Prix performance.

Other Circuits: More than a dozen, including Hockenheimring, Imol and Monza

Although the United Arab Emirates (UAE) currently hosts Formula 1 in its capital of Abu Dhabi, neighboring city Dubai is home to what is known as “the heart of UAE motorsport,” the Dubai Autodrome. Through the latter’s F1 experience, starting from about $2,700, drivers will familiarize themselves with the Autodrome’s 1.52-mile Club Circuit configuration in both a BMW 330i and a Radical SR3; after that, the real deal: a stint in a 550 hp version of the R1 race car used by the Jaguar team during the 2000 season. (You can also climb into an Arrows A23, also with 550 hp, from that team’s short-lived 2002 campaign.) That means a minimum of four laps around the FIA-sanctioned track, in the same type of vehicle British driver Johnny Herbert finished his career, and the exact car driven by his teammate Eddie Irvine.