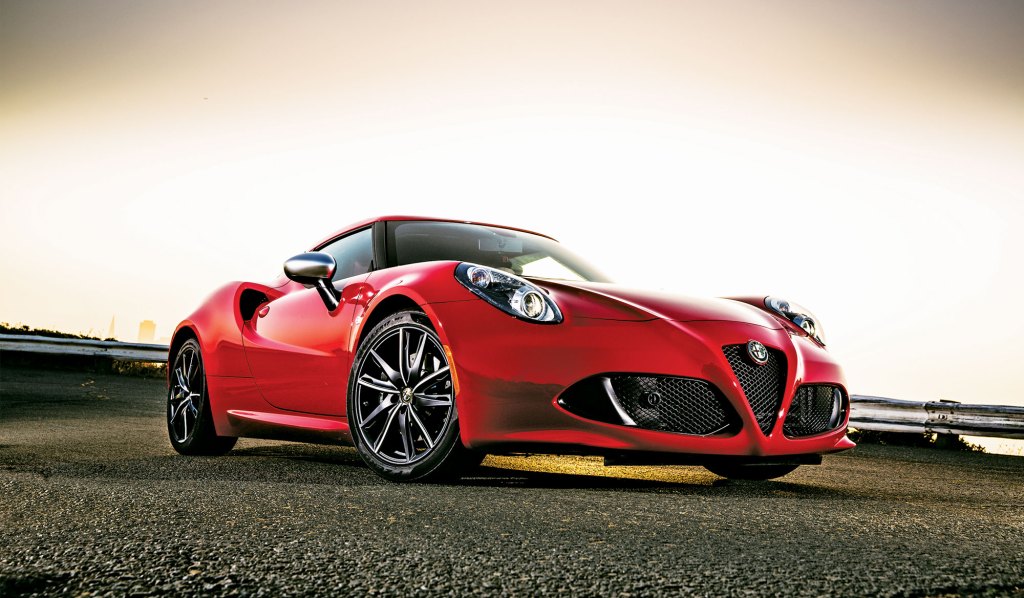 Alfa Romeo has returned to the United States with the 4C, a high-performance, lightweight, and relatively low-priced sports coupe that was expected to reach showrooms by the end of September. Displaying an eye-catching design that recalls Alfa Romeo’s 33 Stradale of the late 1960s, the 4C should have enough appeal to ensure that this long-awaited return by the century-old Italian automaker is long lasting.

After suspending U.S. sales in 1995, Alfa Romeo came back to this country 13 years later with the 8C Competizione, a $265,000 sports car that was followed in 2009 by a $299,000 convertible version. These limited-edition models (a combined total of only 106 examples were sold in the United States) were supposed to herald the arrival of less elusive offerings from Alfa Romeo, but that arrival was delayed until now.

The 4C’s price is a fraction of the 8C’s—the base price is about $55,000—and the new model has about half the power. But it  is just as quick, and it handled well when driven briskly on the sweeps and switchbacks of the coastal road in California’s Marin County. The steering is unassisted, which Alfa Romeo touts as a plus. “This is the closest experience to a motorbike you can have on a street-legal car,” says the company’s chief design officer, Lorenzo Ramaciotti.

The 4C’s turbocharged and intercooled 1,742 cc direct-injection 4-cylinder engine rasps and snarls while producing 237 hp and 258 ft lbs of torque. The engine is mounted transversely behind the shoulders of the driver and passenger and connected to a 6-speed twin-clutch transmission that can be controlled by paddle shifters or set to automatic mode.

The 4C is only 13 feet from nose to tail, 6.5 feet wide, and just under 4 feet tall. The chassis is made of aluminum and carbon fiber, and the latter is exposed and polished to glorious effect inside the cabin. This combination of materials keeps the 4C’s weight down to just 2,465 pounds, which enables the car—despite the engine’s rather pedestrian power output—to sprint from zero to 60 mph in just over 4 seconds and reach a top speed of about 160 mph.

The 4C achieves its fastest acceleration when the Race driving mode is engaged and the launch-control feature is activated. Race, one of four driving modes, was the setting of choice during the portion of the test-drive that took place at the Sonoma Raceway. The Natural and Dynamic settings each displayed their own merits on the highways. The sunny summer weather did not provide the chance to test the All-Weather mode.

The first 500 examples of the 4C that arrive in the United States will be the roughly $70,000 Launch Edition model. It features carbon-fiber trim, larger wheels (18-inch front and 19-inch rear), additional air intakes at the front of the car, a racing exhaust system, and a suspension that is calibrated for the track.

The 4C is the first of eight new models that Alfa Romeo plans to introduce in the next four years. At least some of those will join the 4C in the United States—and maybe stay awhile.