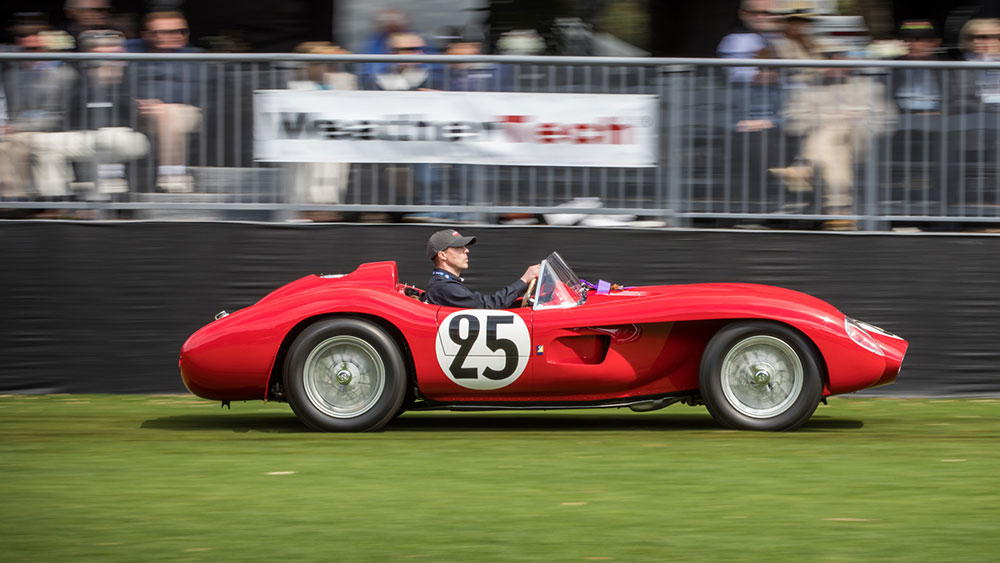 The 25th anniversary of the Amelia Island Concours d’Elegance was nothing short of spectacular especially with the cadre of race cars on display, all culled from the illustrious career of the honoree himself, Roger Penske. The man lovingly dubbed “The Captain” has more than 500 major race wins, nearly three dozen championships across IndyCar, NASCAR and sports car racing, 18 Indy 500 victories, two Daytona 500 championships, and scores more accolades. As such, The Captain prefers motion to rest and he joked to a packed room during a Mercedes-Benz gala dinner that “I never stay anywhere for more than two days. I’ve been here for three and it’s wonderful.”

While a slew of world-class drivers feted Penske, including Jackie Ickx, Hurley Haywood, Jim Rutherford, David Hobbs, Penske’s own racing career was celebrated. He started in 130 races and won 51 of them, including a 1961 SCCA championship, leading Sports Illustrated to crown him the driver of the year. During a McLaren dinner—Penske was close with Bruce McLaren and used McLarens for Can-Am and IndyCar races—Penske shared a glimpse of his future business prowess from back in the Sixties: “We weren’t allowed to put sponsors on the cars, but DuPont was giving me $150 a race, so I put its logo on my car and put some tape over it, knowing that it would fly off by the third lap. I didn’t get black-flagged so it all worked out.”

Plenty of shimmering sheet metal from Penske’s personal career and his Team Penske cars (each adorned in scores of sponsor logos) were on display on the Ritz-Carlton’s lawn during the Concours event. Here, our five favorites.

This would be the first Indy 500 winning car for Penske. Piloted by Mark Donohue, it featured a 1,000-horsepower Offenhauser engine and, in this particular year, the allowance of bolt-on rear wings saw qualifying speeds leap from 179 mph to 196 mph. Donohue set a speed record of 162.9 during his race that stood for 12 years, only to be broken by Rick Mears, who clinched Team Penske’s fourth Indy 500 in 1984.

The Texas-built Chaparral dominated race tracks during the early Sixties, snagging a staggering 22 victories out of 38 entries. It’s revolutionary design included a semi-monocoque chassis, inspired by modern jets, crafted from fiberglass and plastic, its small-block 327 Chevy V-8 was mated to a two-speed automatic transmission in 1964. That innovation eliminated the clutch, allowing the driver to brake with his left foot while keeping his right on the throttle. Penske himself won two races with the Chaparral 2 and finished third in the championship.

Penske worked directly with Porsche to design this Can-Am winner. Featuring a 1,000-horsepower, twin-turbo flat-12 cylinder mill, this car’s mission was to seek and destroy the McLarens that had been dominating the series  for half a decade. At Road Atlanta, where driver George Follmer first got behind the 917/10’s wheel, he lapped the entire field. Twice. He’d go on to win five more races in this bomb, and took home the championship for the 1972 season.

No, this is not a car, but it was arguably one of the most unique engineering feats on the Concours lawn. This outrageous set-up is an impressive fueling system developed and employed by Team Penske back in the late Sixties that cut refueling times by four. At Sears Point in 1969, Parnelli Jones’ Ford took 14 seconds to refuel while Penske’s Big Rig got its wheelman back on track in 3.3 seconds. The margin of victory for that race was 2.4 seconds and the Big Rig was outlawed after one day of use.

This sumptuous and coveted Prancing Horse now belongs to Ralph Lauren, but Penske spent heaps of time behind this very wheel. He raced it to victory at the Nassau Tourist Trophy in 1962, then again in the 1963 Daytona Continental, finishing second. He notched a class victory (and fourth overall) in the 1963 12 Hours of Sebring and then bested the entire field during a Pensacola SCCA race two months later.