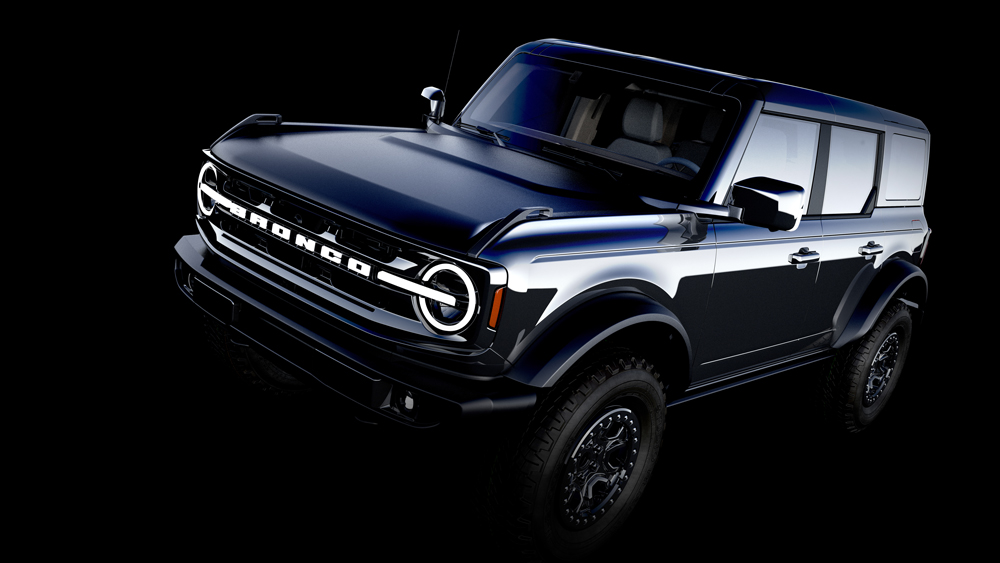 Proof that the original Ford Bronco is truly beloved is evidenced by the array of restoration houses that specialize in the model and the restomods they produce. But we still hoped and waited for Ford to bring it back. Then, we waited some more. Now that Ford has finally revealed its 2021 Bronco lineup, the model’s designers open up about the process and how they reinvented an icon.

Members of the design team for the 2021 Ford Bronco.  Photo: Courtesy of Ford Motor Company.

“When we set out to develop the new car, we knew it had to look like a Bronco and it had to work like a Bronco,” says Paul Wraith, chief designer for Bronco and Bronco Sport. “There is no decorative chrome or extraneous styling, it’s all functional. It’s about maximizing interior volume so users can carry gear and put more on top.”

He notes that two full-size mountain bikes can fit upright in the cargo area. Peaked front fenders, called trail sights, help drivers see the corners of the car and can double as a tie or mounting space for go-pros or the like. The rear window opens independently of the tailgate for easy access to the back.

The profile of the vehicle is pure and simple, with flat body sides and a vertical rear-end. That’s not to say that it’s without character—the new Bronco is a stylish homage to its predecessors with its round headlights, single-piece front grille, one-piece tail lamps and contrast-colored roof. The Bronco Sport, meanwhile, is tailgate-ready with flood lamps that light up the ground when the liftgate is open, and a rear cargo area that turns into a table.

“We put the humans in the center of our thinking and skipped a whole bunch of our usual [design] studio processes,” Wraith tells us. “People would take pictures out of their wallets and tell stories of their brother’s Bronco, or the one that their dad had as a kid; they got passed on through families.”

Based on those personal stories, Wraith’s team created five fictitious users and designed the Bronco lineup around them. “We designed for people by name, and we understood their hopes and inspirations and storyboarded around that,” he explains.

Instead of the slick sketches and renderings typically created in the early stages of car design, many of the initial Bronco drawings were comic-strip-style doodles, showing drivers in action. Many Ford designers have their own Bronco stories, too. Ford’s design chief, Moray Callum, lent his 1976 Bronco to the design team to digitally scan for reference when developing the new models. And Molly Gillies, whose grandfather worked on the first-generation Bronco, helped to sculpt clay models of the new Bronco using the very same tools her grandfather passed on.

The Bronco design team made their early prototypes out of packing material. “There was a lot of stumbling upon invention,” Wraith says. “We were able to quickly see a full-size, scale car in a matter of a week or so—in much shorter time frames. They were very fast and very cheap. You could just chop off pieces and overlay it with VR [virtual reality]; it was what we needed to show something that was much more realistic than clay models.”

Using VR enabled the team to switch instantly between different design themes and compare each one. And while the technology is commonplace in today’s design studios, the Bronco team took it a step further, using fans to simulate wind and heat lamps to mimic the desert sun. They also programmed in new, more realistic backgrounds so designers could experience, as closely as possible, the feeling of being outside with the car. “We mixed physical with virtual elements to help solve problems,” explains Wraith.

One thing was clear to designers from the beginning: The Bronco was going to get dirty. So the team looked beyond automotive design to ensure the Bronco could take a beating and get cleaned up easily afterward. Silicone-covered switches on the dash are waterproof, protecting the electronics inside. There’s rubberized flooring with drains and optional drain plugs so owners can hose out the entire vehicle after a day in the sand or mud. Some iterations of the Bronco include marine-grade vinyl seats that are mildew and UV-resistant.

“We took a lot of inspiration from the maritime industry because boats get rained on,” says color and materials designer Missy Coolsaet. “It’s easy for people to think color and materials just make [a vehicle] look good, but the adamant pushing of Paul [Wraith] to go further and to think of it as an industrial design project rather than car design was really beneficial.”

Designers work on colors and materials for the 2021 Ford Bronco.  Photo: Courtesy of Ford Motor Company.

Coolsaet also hints that the new Bronco contains a few Easter eggs: “People should be looking around their vehicles for surprises that have been built in,” she says. Wraith reveals that one of those is the image of a 1966 Bronco etched into the rear glass, which the driver can only see when looking into the rearview mirror.

In the past, having a vehicle with removable doors and roof made for a logistical nightmare. In response, Bronco designers came up with quick-release light alloy doors that are easy to take off and can be stored on board—a world first in the segment. The doors are stowed in bags and can be easily transported. Standard on the two- and four-door hardtop models is a modular, three section roof that can be taken off and put back on by one person. A removable soft top is also available. Inside, there’s a bolt-in mounting rack on the dash so cell phones or other devices won’t slide off while you’re crawling up and down boulders. Seatbacks can be fitted with optional MOLLE hooks—inspired by expedition backpacks—for cups, flashlights and other gear. With all of the opportunities for customization, inside and out, Wraith promises “no two Broncos will be exactly alike.”