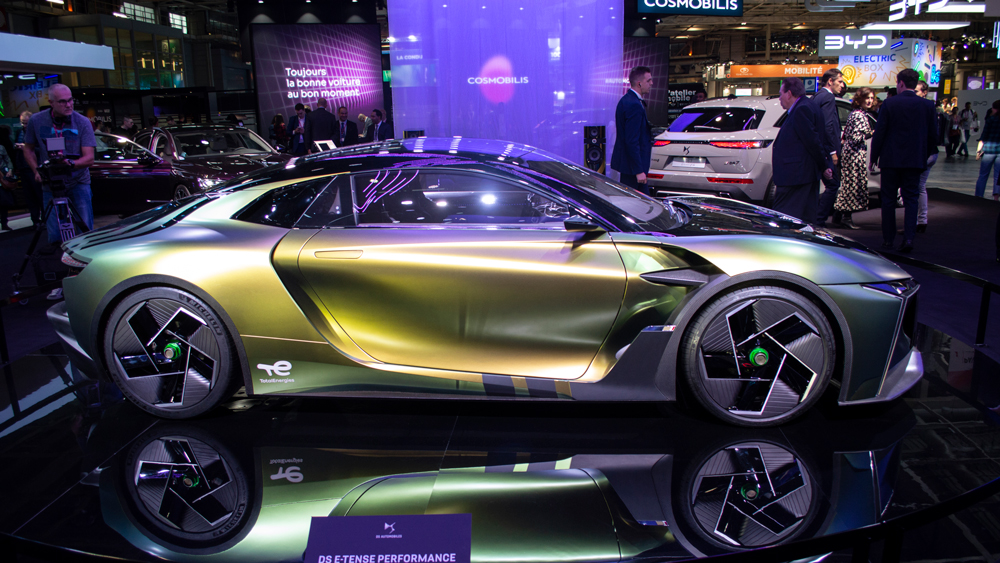 The Mondial de l’Auto in Paris was once one of the largest, most spectacular exhibitions of the automotive world. Originally known as the Salon de l’Automobile, the show dates back to 1898 and became the venue for notable debuts including the Citroen DS, the Lamborghini Miura and the first ever Ferrari GT car, the 166 Inter.

Although significantly scaled back since its pre-pandemic glory days, this year’s show, held October 18 through 23, was nevertheless a good reminder of some of the cool, funky and downright strange cars we won’t get to see stateside. Here are the standouts.

With heavy design influences from a Le Mans–prototype racer, the hydrogen-powered Alpenglow sets the tone for Alpine’s design language going forward for both motorsport and road cars. The resurrected marque, owned by the Renault Group, debuted its A110 back in 2017 and says it will expand its lineup with three future electric models, as well as an entry in the new LMDh class that will compete at Le Mans. The Alpenglow measures more than 16 feet long and 6.5 feet wide, and features highly aerodynamic sculpting and red-and-blue horizontal lighting signatures that give off the glow for which the car is named. Alpine says the vehicle is built around two hydrogen tanks, but hasn’t otherwise disclosed any technical specs.

Once you stop giggling at the name, the car created by a former French racing driver (whose pronunciation of the brand sounds like “opium”) is intriguing, with a hydrogen power-train configuration and a purported 620-mile range. The design, however, appears to be a mishmash of elements from other existing cars, with proportions not unlike the Lucid Air, and front and rear lighting signatures nearly identical to those of the now five-year-old Lexus LC. Still, the French marque says it’s serious about making the model the first hydrogen-powered luxury sedan and is taking reservations for its premier crop of production cars, which are due to be built in Vernon, France. Priced at about $118,000, the Hopium Machina is expected to begin deliveries at the end of 2025.

With the rugged and retro 4Ever Trophy Concept, Renault proves that electric vehicles don’t always have to equate to flush surfaces and perfect aerodynamics. With chunky bumpers and fenders, a higher ground clearance and a spare tire attached to the roof, the 4Ever is, in some ways, the antithesis of current EVs. Renault says the 4Ever is an electric take on the Renault 4, made from 1961 to 1992, while the Trophy moniker is a nod to the 4L Trophy rally held annually in the Moroccan desert as a fundraising effort to help with the education of children in the region. We expect that, although this is a concept car, a version of the compact EV will reach production in Europe in the next couple of years.

A French luxury brand under the Stellantis umbrella (the ever name-changing company whose portfolio includes Maserati, Alfa Romeo, Jeep and others), DS showed its electric concept inspired by Formula E cars this year in Paris. With a carbon-fiber monocoque and two electric motors, the E-Tense Performance (opening image) makes 815 hp and is capable of up to 600 kw of regeneration capacity. Design elements of the concept will inspire the DS lineup of production cars, including the front end and thin lighting signatures. The metallic green paint attempts to mimic the coloration of iridescent beetles and changes its appearance depending on the light. While it’s not possible to own a physical version of the DS E-Tense Performance, the automaker introduced 100 NFTs that were sold off at auction.

A door-less off-roader that looks like a Meyers-Manx and lunar rover had a badass child, the Dacia Manifesto is meant to be just that: a statement that reaffirms an “unrivaled vision for an essential, cool, robust” car with a minimal environmental footprint. The vehicle’s plastic parts contain a large amount of recycled polypropylene, and interior materials include natural cork. And, of course, the removable seat coverings double as sleeping bags. Dacia says the entire vehicle is waterproof and can be hosed off with a water jet. Although it’s not intended for production, the Manifesto, much like the Renault 4Ever, represents a shift from small, jellybean-style EVs to more rugged, capable lifestyle vehicles.

Click here to see more photos of these five cars.