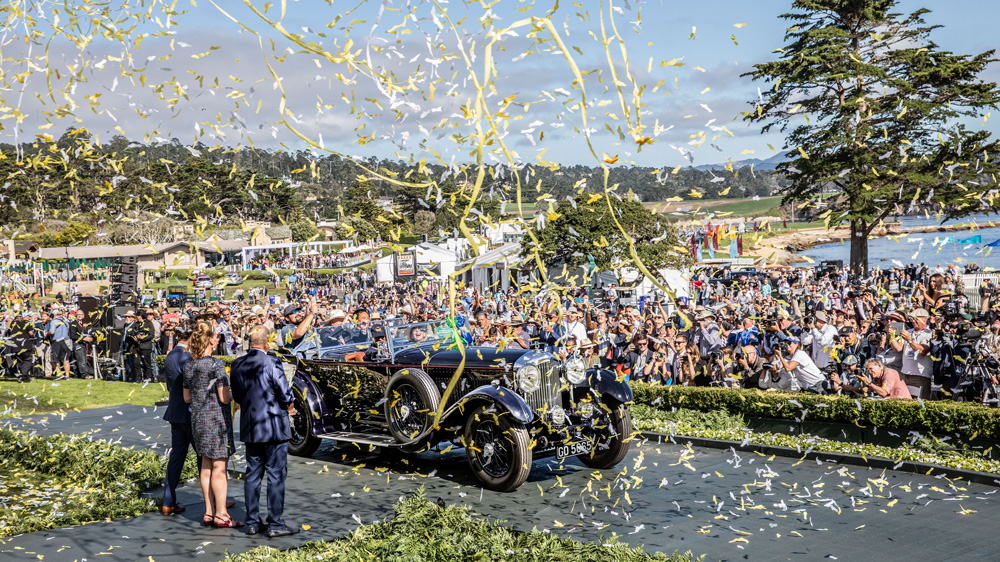 Every society has its sacred places, revered ground that serves to inspire and define its culture and core values. For the automotive community, Mecca is still the Pebble Beach Concours d’Elegance, as was proven again yesterday at the annual contest’s 69th edition held on the 18th fairway of the famed Pebble Beach Golf Links in Pebble Beach, Calif.

Devotees begin their pilgrimage before the sun. In what has become known as Dawn Patrol, many arrive a few hours before the official start to fuel up on doughnuts and coffee supplied by insurance company Hagerty and line the path as the show cars motor to their designated spots.

This year’s field comprised 212 cars divided into 29 specific categories, including Antique, American Classic (closed and open-top automobiles), European Classic, Prewar and Postwar Preservation classes, Postwar Touring and Postwar Sports. In addition, there were also several classes this time for specific marques, such as Bentley, Bugatti, Ferrari and coachbuilder Zagato, as well as one for historic hot rods. And with Rolex as the official timepiece of the event since 1997, the day of judging, spectating and coveting the bygone-era beauties went off like, well, clockwork.

To be named Best of Show at Pebble is the equivalent of an actor garnering an Academy Award, the recipient’s perceived value skyrockets exponentially. The car that had its provenance turbocharged in 2019 was Sir Michael Kadoorie’s 1931 Bentley 8 Litre Gurney Nutting Sports Tourer—a timely choice as Bentley commemorates its centennial this year.

“I feel very privileged to be the recipient of the ‘Best of Show’ and it is extra special as Bentley is celebrating 100 years,” noted Kadoorie in an official statement after the victory. “To win a Rolex watch, thanks to this wonderful car, is a great pleasure.” The gifted wrist candy is an engraved Rolex Oyster Perpetual Datejust 41.

This was only the second time that a Bentley has taken the title at Pebble, the first was a 1927 4 ½ Litre Vanden Plas Tourer back in 1965. Kadoorie, a renowned car collector, is the chairman and partial owner of both Hong Kong–based CLP Holdings Ltd. and Hong Kong and Shanghai Hotels. The latter includes the Peninsula Hotels, which puts on Monterey Car Week’s other main concours, the Quail, A Motorsports Gathering.

The Bentley had competition for the apex award from a 1938 Talbot-Lago T150C-SS Figoni & Falaschi Teardrop Cabriolet (which was named the Most Elegant Convertible), a 1936 Mercedes-Benz 540K Erdmann & Rossi Special Cabriolet and a 1962 Aston Martin DB4GT Zagato Coupé.

However, it was not just yesteryear’s models that appealed to the masses but tomorrow’s as well. The concept lawn presented one-off’s, prototypes and limited-edition examples that included Bugatti’s nearly $19 million La Voiture Noire, the De Tomaso P72, the Lotus Evija, and Audi’s new R8 LMS GT2.

Fittingly, the race-focused Audi was presented throughout Monterey Car Week by nine-time Le Mans-winner Tom Kristensen who, after only two previous visits to the concours, is still in awe and gravitates to a particular segment of machines on display. “What has drawn me is more or less from the time-period when I grew up, and that is the GT cars from the Sixties,” says Kristensen. “That is a time when the innocent engineers were still making big steps forward but also looking at the beautiful shape of the car and not necessarily downforce, which started in the early Seventies. If I had to pick, that’s the one.”

A Type 57C garners First in Class for Bugatti.  Photo: Courtesy of Rolex.

There on behalf of Rolex, another racing great was making his rounds at the concours for the first time. “It’s been a real eye-opener—truly extraordinary, and obviously the setting is the cherry on top,” says Rolex Testimonee Mark Webber, a nine-time Formula One Grand Prix winner and the 2015 FIA World Endurance Champion.

Like Kristensen, Webber is quick to point out his favorite four-wheelers among the many. “I have more emotion towards the racing cars, like a Jimmy Clark Lotus 49, which was Jackie Stewart’s era, gorgeous looking cars—cigar-shaped chassis from Colin Chapman and at the limit in terms of design. For street cars, the Porsche 550 is also very clean and timeless.”

Mark Webber, a member of racing’s royalty and a Rolex Testimonee, attended the concours for the first time.  Photo: Courtesy of Rolex.

Equally timeless are the Rolex watches that Webber won during the course of his career, especially the one from his first win, a GMT with a black dial that he bought for himself. “They’re in my will, that’s what they mean to me,” he notes. “They will be with me as long as I live.” It’s a sentiment that seems shared by many of Pebble’s presenters when it comes to their vehicles.

From the car collectors to the planners, sponsors and spectators, the world’s most prestigious concours is driven by the quest for perfection—a tradition that, like a Rolex, appears to be perpetual.